Many companies hope to send an employee into a government agency to influence regulation. How much better if the employee can actually shape government regulation to promote and sell a specific product! Monsanto seems to have accomplished this — and much more.

Michael Taylor is among a number of people with Monsanto ties who have worked in government in recent years. He worked for the Nixon and Reagan Food and Drug Administration in the 1970s, then became a lawyer representing Monsanto. In 1991, he returned to the FDA as Deputy Commissioner for Policy under George H. W. Bush, and helped secure approval for Monsanto’s genetically engineered bovine (cow) growth hormone, despite it being banned in Canada, Europe, Japan, Australia, and New Zealand.

This was only a start for Taylor. He also did not like some producers advertising their milk as bovine-growth-hormone-free. That seemed to put Monsanto’s product in an unfavorable light. So in 1994 he wrote a guidance document from within the FDA requiring that any food label describing the product as bovine-growth-hormone-free must also include these words: “The FDA has determined ... no significant difference has been shown between milk derived from [BGH] and non-[BGH] supplemented cows.”

It apparently did not concern Taylor that this new pronouncement by the FDA was unsupported by either Monsanto or FDA studies. A private company making any such unsupported claim could have been charged with fraud. But since it came out of the FDA, milk producers would place themselves at legal risk by not printing it on their label.

Taylor moved to the US Department of Agriculture (USDA) in the mid-1990s. During this period, he tried to persuade the FDA and Federal Trade Commission (FTC) to take a further step and make it illegal for dairies to make any claim to a bovine-growth-hormone-free product. Failing in that, he reached out to state governments to make such a claim illegal at the state level. This was finally blocked by a court decision in Ohio that there was indeed a “compositional difference” between BGH and non-BGH-treated milk. Long before this 2010 ruling, Taylor had returned to Monsanto as a vice president, and then returned to President Obama’s FDA, first as Senior Advisor on Food Safety and then Deputy Commissioner for Foods.[1]

Taylor’s story, however, is not just about milk, or even mainly about milk. During his second posting at the FDA, as Deputy Commissioner for Policy 1991–1994, Agency scientists were grappling with questions about the overall safety of genetically engineered foods (often labeled Genetically Modified Organisms). As Jeffrey Smith notes,

The Agency, under Taylor’s and later under others’ leadership, simply ignored these findings. No human studies were required. GMO foods were allowed to enter the food supply unregulated by the FDA and barely regulated by the USDA, which views them as an important US export product. By 2012, in the US, 90 percent of sugar beets (representing half of overall sugar production) was GMO, 85 percent of soybeans (which are to be found in 70 percent of all supermarket food products), and 85 percent of corn, including the corn used to make high fructose corn syrup, a sweetener used in most soft drinks and processed foods.

The few scientists trying to conduct independent research on GMO often found their careers damaged. Most food research, conferences, and fellowships are funded by “Big Food” companies including Monsanto, which has a chilling effect. Even sympathetic colleagues may be reluctant to back those who dare speak out.

Those who persevered in conducting independent research, often abroad, reported worrisome findings. An Austrian study found that mice fed GMO corn seemed fine in the first and second generations, but by the third were sterile. A Russian study of hamsters fed GMO soybeans found a similar result. Could human beings exhibit a similar, delayed response? No one knows. Another, unrelated study showed that the pesticide used in large quantities on engineered Roundup Ready crops is toxic to male testicle cells and threatens both testosterone synthesis and sperm count.

At the same time that the FDA tries to remain as silent as possible about GMOs, the US Department of Agriculture and other parts of the US government are doing everything they can to promote them. The USDA under both George W. Bush and Obama has sought to accelerate what is already an automatic rubberstamp for new GMO products, to “deregulate” them (including grasses such as alfalfa that cannot be restricted to the planted area), and to provide immunity from lawsuits over the spread of GMO crops to adjoining organic farms. Immunity from lawsuit was especially ironic. For years, GMO producers had threatened, intimidated, sued, and in every imaginable way attempted to bully adjoining farmers. If any of the patented seeds drifted and were found on the neighboring farm, that farmer would be charged with “theft.” The clear message: buy the patented seeds or face destruction through legal costs. Remarkably, courts were buying this specious argument. But finally the persecuted began to counter-sue successfully, and the USDA immediately rushed to provide legal immunity to the GMO producers in the form of an insurance policy that organic farmers would have to buy and that would be their only available form of compensation.2

Although we have chosen to focus on the remarkable revolving door career of Michael Taylor at the FDA and Monsanto, because it has potentially affected the future health of hundreds of millions of people, stories like his are not uncommon. A Chicago Tribune article from 2012 is headlined: Chemical Firms Champion New EPA (Environmental Protection Agency) Expert. It describes how Todd Stedeford worked at the EPA from 2004–2007 under the George W. Bush administration, then joined chemical firm Albemarle Corp. While at Albemarle, which makes flame retardants, he defended chemicals used in many products and even suggested that the standard set by the EPA for flame retardants was 500 times too high. Having returned to the EPA in 2011, under President Obama, he is now “in charge of a ... program studying whether dozens of industrial chemicals, including flame retardants, are too dangerous.”3 One must ask: what was the EPA thinking when it made this appointment?

Bill Ruckelshaus, twice EPA head, once said that “at EPA you work for a cause that is beyond self-interest. ... You’re not there for the money, you are there for something beyond yourself.”4 But on leaving the EPA, he himself became a Monsanto director. Meanwhile the Geneva-based Covalence group placed Monsanto dead last on a list of 581 global companies ranked by their reputation for ethics.5

A look at some Monsanto representatives and their positions in government: 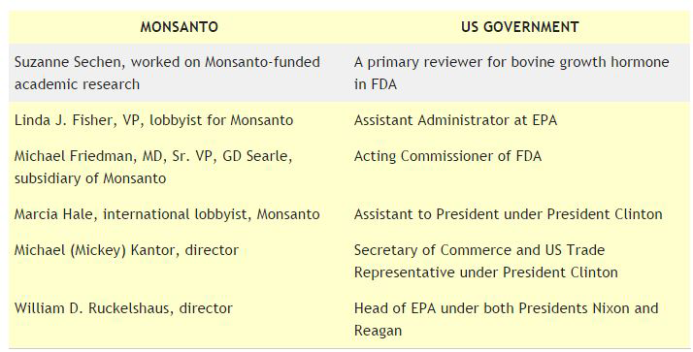 Hunter Lewis is author of twelve books, including The Secular Saints: And Why Morals Are Not Just Subjective, Economics in Three Lessons & One Hundred Economic Laws, Where Keynes Went Wrong, and Crony Capitalism in America 2008-2012, and has contributed to the New York Times, the Washington Post, the Times of London, The Atlantic and many other magazines and web sites including Mises.org and LewRockwell.com. Lewis is also co-founder of Against Crony Capitalism.org as well as co-founder and former CEO of Cambridge Associates, a global investment firm. He has served on boards and committees of fifteen not-for-profit organizations, including environmental, teaching, research, and cultural organizations, as well as the World Bank.