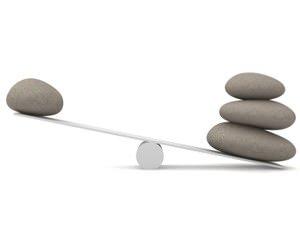 Kelvin's statement is an important reminder that when magnitudes of certain variables or their relationships are in question, without the ability to accurately measure them, you don't know very much; certainly far too little to claim knowledge of "the answer." Unfortunately, his view, while dominant in the natural sciences, has often been abused in the social realm, in defense of misguided government policies.

Nowhere is this clearer than in the most recent iterations of claims about wealth, poverty, and inequality that seem to arise everywhere from Occupy protesters to President Obama's reelection campaign. Here, the discussion typically relies on measures that are highly inaccurate (compounded by ambiguous and confusing terms, such as statements about "the rich," sometimes meaning people with high current incomes and other times those who have a great deal of financial wealth, even though those groups are very different and the cutoffs are typically arbitrary and often unstated), yet they are used as if they met Kelvin's criterion, providing a reliable basis for social policy.

When advocates for ever-more redistribution focus their antirich rhetoric on those with a great deal of wealth, they rely on seriously incomplete and misleading measures of wealth and ignore variables crucial to an adequate analysis of current financial wealth.

Several huge sources of wealth are omitted from the financial measures used by those fixated on inequality. These include pension-fund assets, which largely represent the retirement funds of the nonrich; Social Security wealth (the present value of benefits qualified for but not yet received); and human capital — the knowledge, energy, and abilities embodied in working people but not yet turned into financial wealth. These represent trillions of dollars of wealth, spread far more evenly through the population than financial-wealth measures imply. The same is true of our tremendous wealth in the form of consumer durable goods, from cars to refrigerators to computers. Such omissions guarantee misunderstanding.

Wealth-inequality complaints, in their rush to justify more government redistribution, also ignore many important determinants of financial-wealth differences. A key one is demographics. Disparities in measured wealth in large part reflect age differences in the population.

When people are young, they have not yet had time to convert their capabilities into financial wealth by earning income, then saving and investing in financial assets (e.g., a major reason for low measured wealth in Hispanic households is the youth of their primary earners). However, when they have gotten older, especially approaching or during retirement, they have had time to convert their unmeasured human capital into measured financial wealth. The result is that much of the apparent wealth inequality really reflects age differences in the population (magnified as baby boomers have aged). This demographic bias is also used to buttress claims by those opposed to reducing tax rates, because the immediate positive effects on financial asset prices go to the owners at that time — those productive enough and old enough to have accumulated the financial wealth to own them — even though they would benefit all productive Americans as people responded to improved incentives.

If anything, measures of income inequality and poverty are even less reliable.

One major reason is that that in-kind welfare programs go uncounted in the official data, so that they do not improve the measured situations of the poor. This is a very large error. Of the over $500 billion given annually in government means-tested assistance (not including another quarter trillion or so dollars Medicare spends on the elderly), roughly three-quarters is now given in kind.

The official data further omits taxes, disguising the disproportionate burdens borne by higher-income families. It also hides the impact of the Earned Income Tax Credit. Even though the EITC is refundable, putting dollars directly into recipients' pockets, it is ignored as a "negative tax," making its $40 billion plus in annual transfers to lower-income families disappear from view.

Income studies also fail to incorporate nonsalary benefits and payments to workers, which have increased most among those not at the top of income measures. Mark Warshawsky of the Social Security Advisory Board found that recent expansions in measured earnings inequality were almost completely attributable to rising benefits costs.

The official Census survey also ignores substantial underreporting of income (e.g., people working "off the books" to maintain greater eligibility for various benefit programs) in the Census survey. For example, the more accurate measures of the Survey of Income and Program Participation have routinely found poverty rates 25 percent below official Census estimates. The underreporting by lower-income households is also reflected in the dramatically smaller inequalities in measures of consumption — far better indicators of well-being — than of current income.

Just as the official data dramatically underestimates the condition of those at the lower end of the current income distribution, it overestimates the incomes of those at the higher end. For example, the recent Congressional Budget Office study of inequality, the most common current "proof text" of increasingly unjustifiable disparities, is based on individual taxable income reported to the IRS. However, many forms of income not formerly reported as individual income now are, due to changing incentives, sharply biasing upward measures of the share of income going to higher-income earners. Many people have shifted from filing as businesses under the corporate tax to filing as individuals as a result of decreasing individual tax rates, dramatically exaggerating increases in their incomes. Top managers have also moved from receiving income as stock options taxed as capital gains to nonqualified stock options, making them countable as taxable personal income. The late 1980s cut in income tax rates also saw greater income reporting, raising measures of income inequality.

Inequality complaints also commonly overlook other important determinants of market outcomes, including far more workers and hours worked by members of higher-income families, family size (positively correlated with income), and the far-higher cost of living in large urban areas, where larger incomes tend to be earned. Official household-income measures also ignore that households have become substantially smaller than in the past, thus substantially underestimating the growth in income (e.g., real per-household income rose only 6 percent between 1969 and 1996, while real per capita income rose 51 percent). Further, our aging population has increased the proportion of those retired, increasing apparent income inequality.

Income data is so flawed that many policies and programs that increase recipients' well-being actually make them look poorer.

While official data ignores massive in-kind aid to those near the bottom of the income distribution, such programs reduce benefits as market incomes rise (e.g., the 30¢ reduction in food-stamp benefits for each dollar of net income) or terminate eligibility if incomes exceed a certain level (e.g., Medicaid). Most EITC recipients are also in the phase-out range of incomes, where they lose 21¢ in benefits (as well as paying other taxes) for every added dollar earned, sharply increasing their effective tax rates. Such disincentives lead many to earn less, reflected in the measured data, making the recipients of huge transfers from others actually appear poorer.

Market responses to redistribution also make inequality look worse. Income redistribution compresses after-tax wage differentials between current high- and low-income earners. But by reducing the after-tax payoff to the necessary investment and sacrifice, it reduces the supply of high-income workers over time, raising their pretax earnings. Conversely, it increases the supply of low-income workers, with the opposite effect. Because income data counts only the changed market earnings, measured incomes grow more unequal.

Beyond such massive mismeasurement, which means that the data used to promote increasing redistribution do not come anywhere near meeting Lord Kelvin's standard of knowing what you are talking about, there is another major problem with the interpretation of changing income shares.

Even if, properly measured, certain groups increased their share of financial wealth or current income, that does not imply that their increase in wealth came at the expense of others, so that the government must intervene to "fix" it. Such a view fundamentally misunderstands the nature of markets. Whatever level of wealth one starts at, the way to get wealthier in a market economy is not to make other people poorer but to make them better off.

This follows from the voluntary exchanges of the marketplace — you and I won't agree to trade unless we both feel we get more in value than we give up. Increasing your wealth in a market economy therefore depends on providing goods or services that others value more highly than what it costs you to provide them: a win-win situation. If the wealthy are getting wealthier in the marketplace, this means that they are employing their wealth to improve, not harm, the well-being of others. But the improved options, products, and services — which are increases in real wealth — that buyers receive in exchange for payments that make some suppliers rich are ignored in standard measures of wealth.

While increased wealth in a voluntary-exchange economy comes from creating wealth for others, there are other ways to increase wealth — ways that make others poorer. They have a common denominator: government and its ability to coerce people. Examples include tariffs, quotas, restrictions on entry and competitors, price controls, licensing rules and requirements, and subsidies. All create wealth for some (typically well-organized and informed special interests) by taking it away from others (typically the poorly informed and unorganized general population). Such policies do leverage government power to increase some people's wealth at others' even-greater expense, and can thereby be properly condemned, but one need not know what happened to the distribution of income to do so.

Disparities in Americans' officially measured financial wealth or current income do not justify abandoning the well-established principle that wealth creation in a market economy benefits others. To the extent that such differences arise from the voluntary exchanges of the market, everybody benefits, whether incomplete data reflects it or not, and there is no problem to fix. Added government interference would then simply reduce people's incentives to make others better off. To the extent that some increase their wealth by using government power to harm others, the problem is the abuse of government power; and decreased government involvement, not increased government intervention, is the only real solution.

Political support for a plethora of redistribution policies has long been maintained by twisting Lord Kelvin's dictum — treating "meager and unsatisfactory" data that dramatically mismeasures wealth, poverty, and inequality in America as if it were accurate. That abuse reflects the huge payoff for those groups who use it to win redistribution in their favor, but it does not even remotely reflect reality. And since reality is the necessary basis for effective judgments, the result is to undermine accurate understanding, and therefore the potential for effective policy — particularly "take your hands off" as the most effective government policy.