GET NEWS AND ARTICLES IN YOUR INBOXPrint
A
A
Home | Mises Library | Misesian Praxeology: An Illustration from the Field of Sociology of Delinquency

Misesian Praxeology: An Illustration from the Field of Sociology of Delinquency 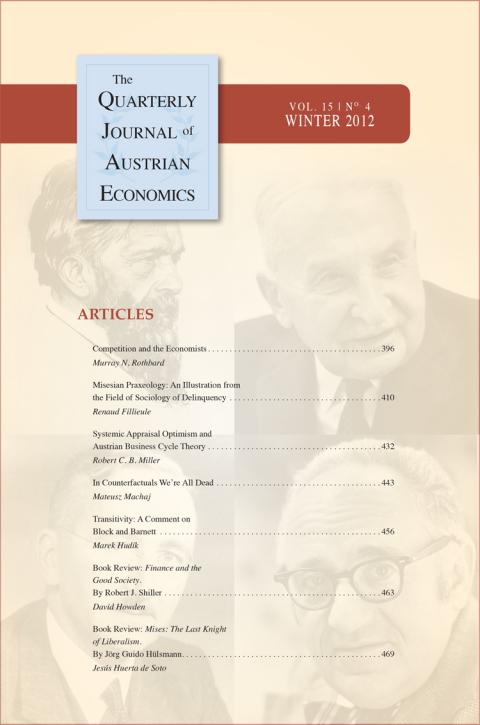 The two main principles of the praxeological system elaborated by Mises are his concept of action and his epistemological apriorism. This paper illustrates these principles in the field of the sociology of delinquency. It first shows that the Misesian concept of action is very helpful in order to (1) understand why a praxeological turn occurred in the 1950s with the critique of the culturalist approach to criminality, and (2) analyze some of the main theoretical developments that took place afterwards, such as the social control theory, the low self-control theory, and the routine activity theory. The paper then shows that, behind their positivist façade these sociological theories illustrate rather than contradict the aprioristic character of the theoretical sciences of human action.

Fillieule, Renaud. "Misesian Praxeology: An Illustration from the Field of Sociology of Delinquency." The Quarterly Journal of Austrian Economics 15, No. 4 (Winter 2012): 410-31.

The Macroeconomic Models of the Austrian School: A History and Comparative Analysis

Three Austrian macroeconomic models—those of Böhm-Bawerk, Hayek, and Garrison, are reviewed and compared. At a...

Symposium on the Centennial of 'The Theory of Money and Credit'. Recorded March 9, 2012, at the Ludwig von Mises...