GET NEWS AND ARTICLES IN YOUR INBOXPrint
A
A
Home | Mises Library | The Military Gravy Train: Full Speed Ahead 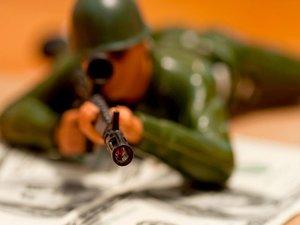 There’s something very odd about the United States military that makes many of the most budget-hawkish fiscal conservatives turn into starry-eyed, big government welfare pushers. The hypocrisy is breathtaking; at the same time as many conservatives are talking about “America’s descent into socialism” they are pushing their own brand of military socialism to ever more absurd lengths.

At a whopping $581 billion per year, the United States already spends more than the rest of the world combined on its military. However, even that number doesn’t represent the entire picture. As Robert Higgs has shown, when everything is included (from the Department of Veterans Affairs to the nuclear weapons expenditures in the State Department to the net interest on past debt-financed defense outlays, etc.) that sum is actually over one trillion dollars. Despite this, every Republican presidential candidate is pushing to increase the military budget. Even Rand Paul proposes adding $76.5 billion to the defense budget — which by itself is more than the military budgets of all but two other countries in the world (China and Saudi Arabia).

Fiscal conservatives love to pass around examples of government waste such as the $615,000 grant that was given the University of California at Santa Cruz to digitize photos, t-shirts, and concert tickets for The Grateful Dead or the $175,587 spent “to determine if cocaine makes Japanese quail engage in sexually risky behavior.” Yet, many of the best examples of such mind-numbingly insane expenditures come from the woefully bloated military of the United States.

For example, in 2007 the Pentagon spent $998,798 to ship two 19-cent washers and the Department of Defense spends over $10 million dollars each year to maintain hundreds of golf courses it owns, presumably an effort to keep America safe. But the worst boondoggles may be the F-22 fighter. Or perhaps it’s the F-35? It’s hard to decide.

According to The Washington Post, the F-22 “… has recently required more than 30 hours of maintenance for every hour in the skies, pushing its hourly cost of flying to more than $44,000 …” Oh, and it can’t fly in the rain either. On the other hand, the F-35 has brought with it a modest price tag of only $400 billion dollars, 70 percent over its initial cost estimate. And it can’t even defeat the fighter jet it is supposed to replace in a dogfight. These massive taxpayer rip-offs join many other projects costing hundreds of billions of dollars, for weapons the military often doesn’t even want.

Indeed, the “military-industrial complex” as Dwight Eisenhower called it, is one of the biggest, if not the biggest, examples of corporate welfare and corporate/government malfeasance around. Lockheed Martin and other military contractors use a variety of unsavory means to ensure ever bigger contracts for ever more unnecessary military contraptions to be paid for at the taxpayer’s expense.

One method is spreading the work around. Basically, these companies will contract and subcontract the work for any given project to as many congressional districts as possible to ensure wide support among congressmen who don’t want to see their district lose jobs. (It should be noted that Eisenhower originally wanted to call it the military-industrial-congressional complex.) For example, the F-35 mentioned above had 1,300 suppliers in forty-five states.

Another tactic is using the “cost plus” approach, which basically has the government pay the contractor’s cost, plus a certain agreed upon profit. Unfortunately, as is probably apparent, this provides the extremely perverse incentive for the company to let the project become as expensive as possible in order to make as big a profit as possible. And with examples such as the F-35, it’s hard to believe these companies haven’t taken advantage of this incentive.

Just as welfare degrades people’s work ethic and resourcefulness, when looking at the sheer waste of these military contracts, it appears corporate welfare degrades a company’s dynamism. As Tom Woods notes in his book Rollback, the amount the United States has spent on its military is absolutely staggering,

… during the period from 1947 through 1987 [the Pentagon] used (in 1982 dollars) $7.62 trillion in capital resources. In 1985, the Department of Commerce estimated the value of the nation’s plants, equipment, and infrastructure (capital stock), at just over $7.29 trillion. In other words, the amount spent over that period could have doubled the American capital stock or modernized and replaced the existing stock.

And what has all of this gotten us? Tom Woods again,

… after all this spending, the end result has actually been a smaller military with older equipment. Since the attacks of September 11, 2001, more than $2 trillion has been added to the 1999 baseline Pentagon budget. Roughly half went to the wars in Iraq and Afghanistan, while the other trillion went to non-war military spending. What did Americans get for that trillion bucks? A smaller Navy and Air Force, and a trivial increase in the size of the army.

Add to this that the Pentagon is the only federal department exempt from audit (well, aside from the Federal Reserve if you consider that a department). And this makes perfect sense as its books are in complete disarray. Back in 2001, Donald Rumsfeld admitted that “According to some estimates we cannot track $2.3 trillion in transactions.” And as Reuters reports, the Pentagon “doctored ledgers [to] conceal epic waste” such as when “the Army lost track of $5.8 billion of supplies between 2003 and 2011 as it shuffled equipment between reserve and regular units.”

Is this the kind of “small government” these fiscal conservatives are looking for?

Perhaps it is. As conservative Mark Steyn noted in his book After America, specifically with regard to the bloated welfare systems in Europe and the United States, as well as the demographic decline of the West,

Faced with a choice between unsustainable entitlements and maintaining armed forces of global reach, the United States, as Europe did, will abandon military capability and toss the savings into the great sucking maw of social spending. That, in turn, will make for not only a more dangerous world but a more vulnerable America that, to modify President Bush, will wind up having to fight them over here because we no longer have the capacity to fight them over there.

Perhaps Steyn should have rephrased it as the “great sucking maw of military spending would be transferred to the great sucking maw of social spending.” And what exactly the Iraq War, for example, did to make the world less dangerous or America less vulnerable is — for good reason — left unstated.

And of course the biggest question is left altogether undiscussed; why does the United States need either a bloated welfare state or a bloated warfare state?

And this boils down to the heart of it; the two parties have little more than two slightly different versions of big government they want to foist on the American people and use to line the pockets of their favored interests. Only slightly of course, because it’s not like the Republicans reduce welfare spending or the Democrats reduce military spending.

In the end, it’s not very complicated; a small government with a massive military is an oxymoron. It’s about time that fiscal conservatives figured this out.