Menger Explains the Origins of Money 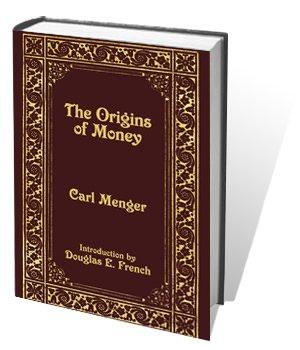 The public's understanding of what money is and its origins has devolved to the point where the government monetary authorities can now inflate with impunity, with the ultimate result to be the destruction of the division of labor undoing all of mankind's progress to date. The average Joe and Jane must trust the wise men and women working secretly in central banks around the world with what passes for money — paper and digits on a computer screen. These banks are the largest employers of academically trained economists. But under the guidance of the Keynesian-schooled, the central banks engage in monetary operations that fulfill the funding needs demanded by politicians for political ends.

The hopes, dreams, and living standards of millions are affected daily by these faceless bureaucrats who supposedly know exactly which monetary buttons to push and levers to pull to insure our prosperity. However, history shows that central bankers have but one strategy to cure all things, especially their past mistakes: printing more money — with their plans for stabilization resulting in just the opposite.

If only everyone could read and understand the essay you hold in your hands, described by 2009 Schlarbaum Award winner Jesús Huerta de Soto, in his Money, Bank Credit, and Economic Cycles, as "the best and perhaps the most brilliant synopsis of Menger's theory on the evolutionary origin of money."

Written in the same year that he testified before the Currency Commission in Austria-Hungary, Carl Menger explains that it is not government edicts that create money but instead the marketplace. Individuals decide what the most marketable good is for use as a medium of exchange. "Man himself is the beginning and the end of every economy," Menger wrote, and so it is with deciding what is to be traded as money.

It was Menger who developed a complete theory of social institutions arising from interactions among humans, each with his own subjective knowledge and experiences. It is the spontaneous evolution of these human actions that create institutions whereby individuals discover certain patterns of behavior that aid each person in attaining his goals more efficiently. Nothing is more central to this evolution than the development of money, making the division of labor possible and satisfaction of wants attainable.

In his testimony for the Currency Commission in 1892, Menger urged a return to sound money and provided specific recommendations to achieve that goal, but Menger was, in the words of Hans F. Sennholz,

always skeptical about the knowledge and wisdom of the political authorities that were conducting the reform. But he had an abiding faith in the principles and laws of the market that spring from the subjective choices of men. 1

And while economists outside of the Austrian School leave the actions of individuals out in formulating their theories and arguments, Menger's contribution to economics starts at that very place. Menger's work provided the foundation for all of the Austrian School and the bedrock for monetary theory, laying the groundwork for Mises, Hayek, and Rothbard.

Sadly, the world's economies continue to gyrate between continuous booms and busts while money is in the hands of the world's central bankers. And while the free market is being blamed for the recent financial meltdowns, there can be no free market if money is controlled and debauched by the state. Menger provided the answer more than a century ago: a sound money, and in turn a sound economy, can only be a product of the market.

There is a phenomenon which has from of old, and in a peculiar degree, attracted the attention of social philosophers and practical economists, the fact of certain commodities (these being in advanced civilizations coined pieces of gold and silver, together subsequently with documents representing those coins) becoming universally acceptable media of exchange. It is obvious even to the most ordinary intelligence, that a commodity should be given up by its owner in exchange for another more useful to him. But that every economic unit in a nation should be ready to exchange his goods for little metal disks apparently useless as such, or for documents representing the latter, is a procedure so opposed to the ordinary course of things, that we cannot well wonder if even a distinguished thinker like Savigny finds it downright "mysterious."

It must not be supposed that the form of coin, or document, employed as current-money, constitutes the enigma in this phenomenon. We may look away from these forms and go back to earlier stages of economic development, or indeed to what still obtains in countries here and there, where we find the precious metals in an uncoined state serving as the medium of exchange, and even certain other commodities, cattle, skins, cubes of tea, slabs of salt, cowrie-shells, etc.; still we are confronted by this phenomenon, still we have to explain why it is that the economic man is ready to accept a certain kind of commodity, even if he does not need it, or if his need of it is already supplied, in exchange for all the goods he has brought to market, while it is nonetheless what he needs that he consults in the first instance, with respect to the goods he intends to acquire in the course of his transactions.

"Menger's work provided the foundation for all of the Austrian School and the bedrock for monetary theory, laying the groundwork for Mises, Hayek, and Rothbard."

And hence there runs, from the first essays of reflective contemplation of a social phenomenon down to our own times, an uninterrupted chain of disquisitions upon the nature and specific qualities of money in its relation to all that constitutes traffic. Philosophers, jurists, and historians, as well as economists, and even naturalists and mathematicians, have dealt with this notable problem, and there is no civilized people that has not furnished its quota to the abundant literature thereon. What is the nature of those little disks or documents, which in themselves seem to serve no useful purpose, and which nevertheless, in contradiction to the rest of experience, pass from one hand to another in exchange for the most useful commodities, nay, for which everyone is so eagerly bent on surrendering his wares? Is money an organic member in the world of commodities, or is it an economic anomaly? Are we to refer its commercial currency and its value in trade to the same causes conditioning those of other goods, or are they the distinct product of convention and authority?

Carl Menger founded the Austrian School of economics. Menger, along with Jevons and Walras, published a work in 1871 which revolutionized the way economists viewed value and price theory by introducing innovations in the theory of marginal utility. His work was profoundly influential in Europe, where it inspired the work of Ludwig von Mises and Friedrich Hayek.