The Mayo Clinic and the Free Market 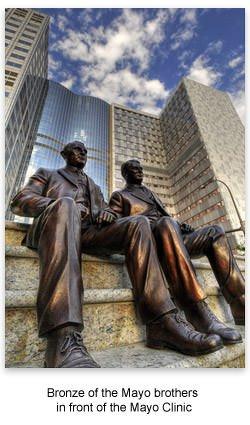 Neoclassical economists such as Kenneth Arrow and Joseph Stiglitz tell us that the healthcare market is imperfect (or "Pareto inefficient"), meaning that the allocation of services is not optimal from the standpoint of social welfare. They point to information asymmetry as an important cause of this imperfection: patients cannot distinguish on their own the physician from the charlatan, the surgeon from the butcher, the remedy from the snake oil, the hospital from the coop. This may lead to moral hazard where the party with the most knowledge can provide inferior service with impunity.

To provide the necessary counterbalance for this "knowledge gap," experts must be in charge of social institutions that tell patients where to go, whom to see, how to be treated, and how much it should cost. This has been a principal and virtually unchallenged argument underpinning healthcare legislation for the last 100 years. In a famous paper he wrote on the subject in 1963, Arrow declared, "It is the general social consensus, clearly, that the laissez-faire solution for medicine is intolerable."

But for those who wonder how firmly established the "general social consensus" or how intolerable the "laissez-faire solution" really is, a short booklet published in 1926 may prove instructive. The Sketch of the History of Mayo Clinic and Mayo Foundation is an account produced by Mayo "merely to record in chronological order the principal facts concerning the two institutions."

One fact that stands out is the professional career of William W. Mayo, the clinic's founder. Mayo started practicing in Minnesota in 1855 and, for a time, was surgeon with a band of settlers frequently occupied by guerrilla warfare with the Sioux Indians. Mrs. Mayo herself, it appears, did not hesitate to swing around the pitchfork to deter Native American warriors from attacking their village. When the fighting subsided, the Mayos moved to Rochester where William Mayo established his private practice. Mayo had previously studied chemistry in Manchester under the famous John Dalton, but after moving to the United States, his medical training had consisted of a two-year apprenticeship in Indiana and a four-year formal medical education at the University of Missouri.

Mayo was keen on applying the latest discoveries in medical science. He was the first physician in the West to adopt the microscope for clinical work. In 1871 he took a graduate course at Bellevue Medical College in New York and became a pioneer in abdominal surgery. He was an avid reader and contributed frequently to the medical literature on a variety of topics. Remarkably, however, the patron of the famous clinic did not have a medical license.

A singular aspect of American medicine in the second half of the 19th century is its nearly complete lack of regulation. While modest licensing standards had been adopted by most states of the Union after the revolution, these weak requirements eventually disappeared during the westward expansion of the country. In his book Medical Licensing in America, historian Richard Shryock attributed this "deterioration" in part to Jacksonian "anti-intellectualism" and lamented that

By the 1850s, when German authorities were establishing uniform standards and when the British government was taking the first steps toward national control, the situation in the United States seemed to be approaching its nadir.

Indeed, hardly more than a few months of apprenticeship were needed to furnish anyone with the credibility necessary to hang a shingle and start practicing. What's more, the 19th century saw the rise of a variety of alternative schools of medicine such as homeopathy, Grahamism, vegetarianism, eclecticism, and so forth, whose practitioners would claim a therapeutic status equal to those trained in the "regular" schools. This doc-eat-doc chaos was truly unique in the history of Western medicine, for everywhere else in the developed world the output of physicians had always been more rigidly controlled either by the state or the church.

The Mayo family experienced firsthand the challenges of this highly competitive market. The clinic saw its beginnings after a cyclone devastated the town of Rochester. The Protestant Dr. Mayo partnered with Catholic nuns from the convent of the Sisters of St. Francis to build St. Mary's hospital, which would later become the nucleus of the institution. At the time of its opening in 1889, however, the hospital had to contend with rising tensions between Protestants and Catholics, and a few years later the Mayos were confronted with the erection of a rival homeopathic hospital, which had the endorsement of the town's establishment and press.

As the authors of the Sketch noted,

In 1893, at about the time the first addition to St Mary's was completed and opened to patients, the American Protective Association propaganda again swept over the Northwest. Several Protestant ministers and their congregations in Rochester entered into the campaign. St Mary's Hospital was anathematized as a Catholic agency and patients were advised not to go there for treatment. The homeopathic physicians of the town, who had made themselves conspicuous as advocates of the propaganda, started a hospital known as the Riverside Hospital. The local papers were full of news concerning the new hospital, its committee, staff, and personnel. In the midst of the excitement the attention of the public reverted to the Doctors Mayo, who had refused to become associated with the new hospital or to operate on patients who insisted on going there. As was to be expected, this called down an avalanche of abuse on their heads.

But despite the "avalanche of abuse," the Mayos and the nuns continued to plow along, serving the community to the best of their ability. Because it was the business policy of William W. Mayo's that "each patient should pay according to his means," 30 percent of the clinic's patients were treated free of charge, and another 25 percent "barely at cost."1 With indefatigable energy, knowledge applied from the emerging sciences, and genuine care for fellow human beings, the Mayos built an institution whose reputation grew at an astonishing pace, while the rival hospital gradually went out of business. By the turn of the century the Mayo Clinic had become a leading medical center to which patients would flock from around the state and the country.

By what miracle did farming communities in backwater Minnesota find a way to bridge the knowledge gap without the help of medical boards, state licensures, safety regulations, certifying agencies, quality mandates, or multicultural activism? The phenomenon is inexplicable according to welfare economics, which overlook that it is precisely in the arena of laissez-faire that skill, innovation, and charity stand the best chance against greed, prejudice, and incompetence. But for those invested in the theory and practice of social engineering, this optimistic perspective may be too much to bear.