GET NEWS AND ARTICLES IN YOUR INBOXPrint
A
A
Home | Mises Library | A Matter of Degree: The New York Subway

A Matter of Degree: The New York Subway 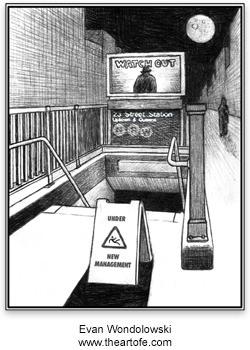 [From chapter 14 of The Rise and Fall of Society by Frank Chodorov.]

The small State can do to Society everything the large State can do, but not so much of it. The tyranny and terrorism of modern communistic overlords is of a kind with the practices of ancient Sparta, and twenty-five centuries before Mr. Roosevelt launched the New Deal, Pericles had something closely resembling it. Sparta and Athens were small aggregations, compared to their modern counterparts, and so there were fewer people to ride herd on; also, because they were less productive, there was less for the bureaucrats to lay their hands on. But the pattern of intervention and confiscation was the same. A State is a State, now as in the past, regardless of the size of its victim, and regardless of ideology affected by its management. It is always at war with Society.

The history of our own political subdivisions — states and cities — is well splattered with instances of "corruption." Our newspaper headlines and our campaign oratory periodically bear witness to the persistence of predatory practices by political management, even in our smaller communities. "Throw the rascals out" is the standard battle cry in our contests for political preferment, indicating that rascality is the regular order. But, when we dig down to the bottom of the rascality, we find some interventionary law that was ushered in with yards of moral fustian. It is the law itself that stimulates the cupidity of the official and his private accomplice. The policeman would not help himself to a banana from the peddler's pushcart if there were no law regulating the pushcart business, and schemes to evade taxes, including bribery, are the inevitable consequence of taxation. Interventionism is the stock in trade of every political establishment, and "corruption" is its corollary.

As an illustrative instance, on a rather grandiose scale, there is the case of the New York City subway system. Originally this railroad was built by entrepreneurs under a franchise granted by the "city fathers." As a condition of the grant, the fare was fixed at five cents. For a while all went well; the company rendered adequate service and paid its bills, including interest on its bonded indebtedness. As the city pulled into its orbit more and more surrounding communities, the company extended its mileage, as required, and in due time the nickel fare did not meet operational costs. The company asked for permission to increase its fare. The people-loving politicians refused the request and the "nickel fare" became a potent campaign issue. From the very beginning there were those who clamored for public ownership and operation, terming the franchise a "giveaway," but they were shouted down as socialists, the bondholders and management being most vociferous in this denunciation. But, when the company defaulted on its interest payments, and the bonds consequently shrank in value, it was the bondholders who asked the city to buy them out; they had no objection to socialism if a profit were involved. Eventually, a "reform" administration, headed by a mayor of pronounced socialistic persuasion, arranged for the purchase of the bonds at a price far beyond the open market quotation. The taxpayers, as usual, paid the bill. Shortly thereafter the subway was "taken out of politics," meaning that the fare was raised to ten and then to fifteen cents, and deficits are now the regular order. The subway system is now a city-owned monopoly, run by bureaucrats, whose prime interest is the perpetuation of their jobs, not railroading.

There was no obvious "corruption" in this operation, but it is known that speculators took a keen interest in the bonds when the prices declined to less than the physical valuation of the property, and that they sold them to the city at a handsome profit; even if no officials were involved in this piece of business (which is assuming that officials are more than human), the fact is that this venture in public railroading compelled the citizens to finance the acquisition, and continues to compel them to meet the operational losses. It was done by a city, not a national, establishment. Indeed, the City of New York has set a pattern for the nationalizing of the railroads of the country: a regulatory body, with power to fix rates and compel unprofitable operation, squeezes the business into bankruptcy, so that the owners are quite willing to sell their property to the taxpayers, and bureaucracy improves its position.

Frank Chodorov was an advocate of the free market, individualism, and peace. He began as a supporter of Henry George and edited the Georgist paper the Freeman before founding his own journal, which became the influential Human Events. He later founded another version of the Freeman for the Foundation for Economic Education and lectured at the Freedom School in Colorado.