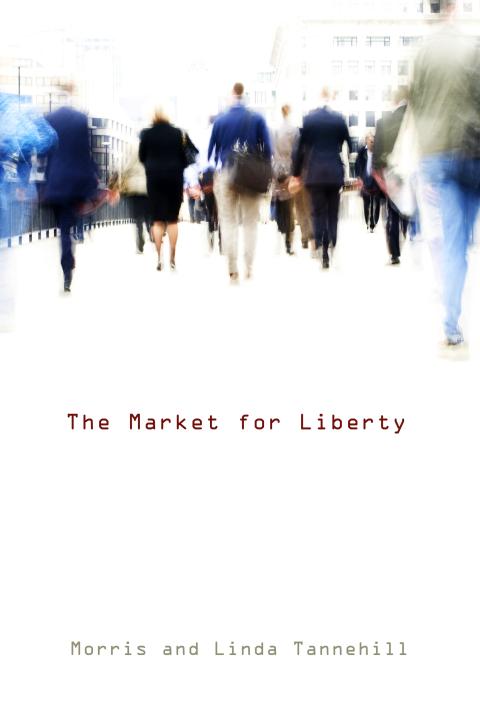 Some great books are the product of a lifetime of research, reflection, and labored discipline. But other classics are written in a white heat during the moment of discovery, with prose that shines forth like the sun pouring into the window of a time when a new understanding brings in the world into focus for the first time.

The Market for Liberty is that second type of classic, and what a treasure it is. Written by two authors—Morris and Linda Tannehill—just following a period of intense study of the writings of both Ayn Rand and Murray Rothbard, it has the pace, energy, and rigor you would expect from an evening's discussion with either of these two giants.

More than that, these authors put pen to paper at precisely the right time in their intellectual development, that period rhapsodic freshness when a great truth had been revealed, and they had to share it with the world. Clearly, the authors fell in love with liberty and the free market, and wrote an engaging, book-length sonnet to these ideas.

This book is very radical in the true sense of that term: it gets to the root of the problem of government and provides a rethinking of the whole organization of society. They start at the beginning with the idea of the individual and his rights, work their way through exchange and the market, expose government as the great enemy of mankind, and then—and here is the great surprise—they offer a dramatic expansion of market logic into areas of security and defense provision.

Their discussion of this controversial topic is integrated into their libertarian theoretical apparatus. It deals with private arbitration agencies in managing with disputes and criminality, the role of insurers in providing profitable incentives for security, and private agencies in their capacity as protection services. It is for this reason that Hans Hoppe calls this book an "outstanding yet much neglected analysis of the operation of competing security producers."

The section on war and the state is particularly poignant. "The more government 'defends' its citizens, the more it provokes tensions and wars, as unnecessary armies wallow carelessly about in distant lands and government functionaries, from the highest to the lowest, throw their weight around in endless, provocating power grabs. The war machine established by government is dangerous to both foreigners and its own citizens, and this machine can operate indefinitely without any effective check other than the attack of a foreign nation."

Also overlooked is the Tannehill's challenging plan for desocialization or transition to a full free society. They argue against privatization as it is usually understood, on grounds that government is not the owner of public property and so it cannot sell it. Public property should be seized or homesteaded by the workers or by people with the strongest interest it in, and then put on the open market. If that sounds crazy or chaotic, you might change your mind after reading their case.

What's remarkable is how this book actually predates Rothbard's For A New Liberty. In fact, Rothbard chose it as one of the top 20 libertarian books of all time, to be printed in his series for Arno Press. It had a huge impact when it came out in 1970, especially among the generation that was debating the question of whether the state needed to provide "night watchman" functions or be eliminated all together.

The authors were drawn to Rand's ethical outlook but Rothbard's economics and politics. But, clearly, they were surrounded by classics of all ages when they wrote. So this fiery little treatise connected with the burgeoning movement at the time, providing just the type of integration that many were seeking.

Since the 1980s, however, the book has languished in obscurity. If the authors are still around, no one seems to have heard from them, a fact which seems only to add to the mystery of this never-to-be-repeated book.

Who should read this book? It makes a bracing read for a person who has never been introduced to these ideas. No reader could be left unchanged by it. For the person who has an appreciation of free enterprise, this book completes the picture, pushing the limits of market logic as far as it can go. For those who have been drawn to the argument concerning insurance agencies in the free market, this explanation is still the most extended in print.

Morris and Linda Tannehill were two libertarian activists and thinkers who, in the early 1970s, made surprisingly profound advances in the theory of the stateless society. Their free-market manifesto, The Market for Liberty, was written just following a period of intense study of the writings of both Ayn Rand and Murray Rothbard; it has the pace, energy, and rigor you would expect from an evening's discussion with either of these two giants.

Morris and Linda Tannehill were two libertarian activists and thinkers who, in the early 1970s,...

Some great books are the product of a lifetime of research, reflection, and labored discipline. But other classics...

This book is very radical in the true sense of that term: it gets to the root of the problem of government and...