The Many Collapses of Keynesianism 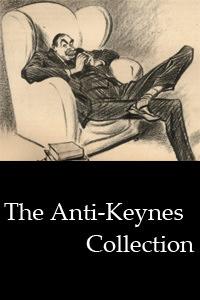 It should be obvious to everyone but the most dedicated adherent of Keynesianism that the stimulus did not accomplish its end. The combination of outright spending by Congress, the desperate schemes to reflate the housing market, the attempt to transfuse bleeding firms with other people's money, and the creation of trillions in artificial money, has not done a thing to lift the US economy.

Actually, the reverse has been true. All these efforts have prevented the adjustment of economic forces to the postboom world. And all the resources that the stimulus consumed were extracted from the private sector, for we must always remember that government has no resources of its own. Everything it does must come from the hides of private producers and the citizenry in general, in the future if not immediately.

It's tedious that we had to learn this lesson yet again, for it was only 38 years ago that we experienced yet another collapse of the Keynesian paradigm. The color of the theory was a bit different in those days. The fine-tuning operations of the government were supposed to operate according to a fixed model in which there was a tradeoff between inflation and recessionary unemployment. If unemployment got too high due to slow economic growth, their solution was said to be simple: reflate and deal with the costs. If unemployment then became too low in recovery — leading to an "overheating," as the parlance of the time put it, the answer was to deflate.

The point of this simple trade-off was to boil down the opaque notions of Lord Keynes to their central-planning essence, and to avoid the endless legislative tangles that plagued the New Deal years. The Keynesians had claimed that FDR's experiment in countercyclical policy was not well planned and not scientifically administered, which is why it didn't go as planned. Thanks to the postwar clarity of the new, simple model, Keynesians would get it right this time.

They certainly got their way in terms of policy. In 1971, Richard Nixon had abolished the last vestiges of the gold standard, finally untying the dollar from any relationship to physical gold and setting it loose to float like a kite on a string — or maybe without the string. It was supposed to be the Keynesian ideal. No more fetters. No more of the barbarous relic. No more limitations on what the scientific planners in government could or could not do. Now they could act to bring about the socially optimal combination of inflation and unemployment. Nirvana!

Now keep in mind, here, that this was a testable proposition. If there was a trade-off at work here that the government could manage, what we would not see would be, for example, unemployment increasing at the same time as inflation. Mostly we had not seen this in the past, it is true. During the Great Depression, prices kept falling (and thank goodness for that, for this was the only saving grace of the entire period). There was a slight uptick of inflation in the mid-1950s but it wasn't enough to set off alarm bells.

Then came 1973–1974. Unemployment was high and rising from 4 to 6 percent from the recession lows — and, yes, that was considered high in those days. At the very same time, inflation rocketed upward into the double digits. Thus was born the inflationary recession. This was an animal that was not supposed to exist, according to the model as understood at the time.

The answer, of course, was that government and its policymakers could do no such thing. This was when panic set in, and every cockamamie theory known to man was employed to reduce unemployment and inflation at once. But there was a problem. The policy makers are always and everywhere loath to admit fault for anything. Surely it is not monetary policy that is to blame, they said. Instead, it was the greed of businessmen, the voraciousness of the consumer class, the panic of the general population — anything and everything was at fault except the government itself.

So while the Keynesian paradigm had obviously failed, who in government was willing to take responsibility for this failure? No one. Therefore matters only became worse, and the inflationary recession became a way of life for Americans, all the way to the outrages of the late 1970s that finally swept Ronald Reagan into office.

Reagan campaigned on an anti-Keynesian platform. He even talked about reinstituting a gold standard. He said he would cut taxes and let the economy work. Those promises amounted to nothing, but there did seem to be some consciousness at the time that government was not capable of forever leaning against the market winds. The real credit, of course, goes to Carter-appointee Paul Volcker. As head of the Fed, he engineered an actual reduction in the money supply, and broke the back of the crisis. Think of him as the anti-Greenspan or the anti-Bernanke.

Greenspanism-Bernankeism reigns today, and that is the true tragedy of our times. The Fed, the Treasury, the president, the regulators, and the Congress have done everything possible to reflate, stimulate, stabilize, and counter market forces. As expected, they have lost the battle. Unemployment is still outrageously high, and inflation is working its way up yet again. But there is an even more serious problem. In the course of stimulating the economy, the Fed has created incredible amounts of fake money that it has stuffed in the vaults of its best friends in the banking industry. And those phony reserves seem now to be leaking out to cause horrific waves of price inflation.

Those who blame Obama for this might consider whether any Republican but Ron Paul would not have done exactly the same thing. The Obama prescription for economic recovery was actually started under George Bush — in exactly the same way that Hoover was the first New Dealer. The problem is the man in the White House, to be sure, but he is not the only problem. The core issue is that (1) we have a monetary and banking system that is socialistic and therefore used by the power elite to enrich themselves at our expense, and (2) the policy elite clings to the Keynesian pretense that government is capable of waging a war against market forces. That, and the fact that Keynesianism empowers the elite, is why this pathetic and dangerous history keeps repeating itself.

In the market economy, there is a long-run tendency for errors to be corrected and replaced by different practices that uplift the people. In government, there is a long-run tendency to keep trying the same thing again and again, no matter how often or how badly it fails. Keynesianism is, after all, as Joseph Salerno points out, the "economics of state power." And that guides us to the foundational problem: the monopoly entity that rules and devastates society for its own benefit.