Malpractice on the Market It is widely contended by Republicans that the high price of medical malpractice insurance, in some areas higher than $200,000 annually, is a leading cause of rising prices for health services.

This contention is accurate, but the solution they offer — new, more stringent regulations on tort rulings — is far from adequate.

It is easy to see how high malpractice-insurance premiums increase the price of health services. From a doctor's point of view, malpractice premiums are a cost of operation, so if premiums increase, doctors will leave the market for certain medical services until the market price for them rises above costs. This makes both consumers and doctors worse off, as consumers pay higher prices for fewer services and doctors are pushed into less-productive professions.

From this simple analysis, it might seem to be best not to burden doctors with the need for malpractice insurance in the first place. If the only objective is to cut monetary costs, it seems prudent to completely outlaw the suing of doctors. This, however, ignores the important role that malpractice lawsuits and insurance play on the market.

Malpractice lawsuits, just as lawsuits against corporations, are an important mechanism for the maintenance of financial incentives in the market. While the specialized nature of both physicians and certain afflictions can sometimes limit choice and therefore competition, the threat of a malpractice lawsuit is sufficient to keep doctors from providing reckless care. In this way, the threat of malpractice suits spreads some of the risk of negative health outcomes to doctors. There is a trade-off to this redistribution of risk, however, as doctors who assume a larger portion of malpractice risk will charge higher prices for their services.

Consensual malpractice insurance contracting transfers the doctor's share of that risk to a third party attempting to profit from the pooling of individual doctors' class risk. Just as with any kind of insurance price, malpractice premiums vary according to class probability across different types of medical service, and doctors willing to take on more individual risk by agreeing to higher deductibles will be rewarded with lower premiums.

Now that we understand the functions of malpractice lawsuits and insurance, we are able to examine the causes of their failures in America. The symptoms are well-known: unpredictable malpractice rewards, often disproportionate to damages and sometimes even in the millions of dollars, make malpractice insurance unprofitable at low premium levels.

This perverse state of affairs is a result of a government monopoly on malpractice arbitration and the regulation of malpractice contracting between patients and doctors.

Because a judge in a monopoly public court system faces no financial incentives to be fair and judicious in his rulings, there is no economic force directing him to rulings whose rewards are commensurate to damages inflicted on the patient by the doctor. It should be no surprise, then, that malpractice awards are often wildly disproportionate and burdensome. In addition to this, the monopoly courts do not even allow patients to waive their right to malpractice lawsuits or to privately agree to malpractice rewards with their doctors before they submit to treatment.[1]

This arrogant refusal to acknowledge agreements between patient and doctor, when coupled with increasingly unjust and unpredictable rewards, effectively dumps the entire financial burden of malpractice risk on doctors. It simultaneously increases the monetary costs of that risk. It is no surprise, then, that insurance premiums are high enough to stifle the market. Also, as we discussed earlier, this legal dumping of all risk onto doctors increases prices for consumers.

A sharp-witted opponent of this Austrian position might note that this outcome, while more expensive in terms of dollars, makes doctors more risk averse and therefore more careful in their provision of services.

This argument is both true and irrelevant. It is praxeologically true that, when forced to assume a higher share of uncertainty costs, doctors will become more risk averse and therefore will likely take extra precautions when providing their services. However, another corollary of the same a priori truth is that increasingly risk-averse doctors will perform fewer health services, and will discontinue most heavily those services that carry the highest risks. This is precisely why so many doctors are leaving the high-risk fields of obstetrics and gynecology in favor of other areas of practice.

It is worth noting that with higher prices, poor consumers will not have the financial means to acquire these risky services. These consumers, hoping to maximize their access to health services, are the most likely to waive their right to a malpractice lawsuit and instead agree to lower-damages rewards.[2] Just as with emergency care, we can see that government regulation, which purportedly protects citizens from the dangers of a free market, forces the most needy patients out of that market. "Underserved areas" in the medical-care market are visible and tragic government failures.

Still, attempting to reach more-efficient market outcomes with caps on rewards is just as destructive as allowing "jackpot justice" and risk-dumping to continue. To set maximum rewards while retaining the public-court monopoly still entails mandating the division of risk between patients and doctors. There is no universal level of risk tolerance either for doctors or for their patients, so the division of uncertainty must be left to private negotiation between both parties to reach the optimal balance between risk and price.

Private negotiation of prices must also be allowed and respected, for at a constant price no doctor will accept a greater share of the procedure's risk. Therefore, what is pejoratively called price discrimination will and should occur on a free market for risk-bearing medical services. With customizable combinations of risk and price, high-income and risk-averse consumers will be able to pay higher prices to be guaranteed large rewards in the case of malpractice, while lower-income consumers will finally achieve greater access to risky procedures, which they're deprived of by the current legal structure.

Yet even ordering the existing public courts to respect private contracts is not sufficient to efficiently allocate risk between patients, doctors, and insurers while also maintaining market-clearing prices for medical services. To achieve these two broad goals, the public monopoly on arbitration must be lifted, and private arbitration firms must be allowed to enter the market. 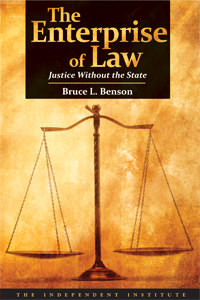 While respect for private negotiation would eliminate many of the destructive losses associated with current malpractice law, disputes may still arise in any contractual exchange, and private courts are much better suited to handle such disputes. Private malpractice courts are subject to strong incentives to reach rulings that are proportionate to damages and consistent with prior contracts, because arbitration firms with a reputation for being unfair to either doctors or patients would lose business. Neither patients nor doctors would agree to handle their disputes in a free-market court which they believe is biased against them, but unfortunately today's doctors and their insurers are all too often bullied by monopoly courts, a situation which costs consumers in the long run.

While medical malpractice has long driven up prices for health services, no superficial package of regulations will suffice to repair this fractured system. Allowing free entry to the arbitration market would allow firms to compete over the right to interpret and enforce contracts between doctors, patients, and insurers. This situation of dynamic competition will lead to a more efficient allocation of risk burden and make healthcare more accessible and valuable for all consumers.