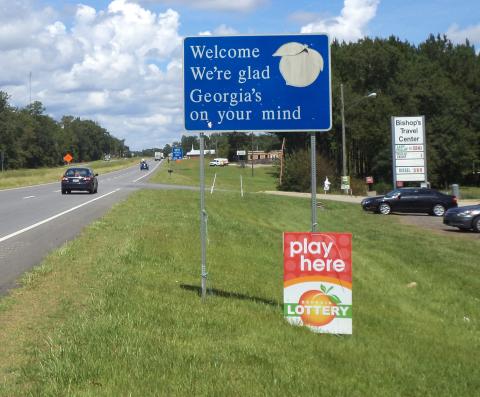 After an in-depth study of all the evidence on the lottery, I cannot find one positive thing to say about the lottery. The state lottery is a Sheriff of Nottingham policy because, like the character in Robin Hood, it steals from the poor in order to give to the bureaucrats, politicians and the rich.

The state lottery is a tax, which is to say it is forced wealth redistribution. The state takes 35 cents out of every dollar bet on the lottery. It is not a voluntary tax; in fact, there is no such thing. You don’t volunteer to pay this tax anymore than you volunteer to pay the tax on bread, beer, or your wages. The government doesn't give you a choice and the only way you can avoid the tax on bread is to not buy bread or the flour used to make bread.

The lottery tax is regressive. It takes a higher percentage of a poor man’s wages than a rich man's. Every study has shown this to be the case and there has not been one published study that contradicts this finding. But that is not all: the lottery is also played more often by poor people and is therefore a highly regressive tax. Rich people can gamble at much better odds in Las Vegas or over the Internet where the payback is 90% rather than the state lottery’s 50%.

Poor people pay the bulk of the lottery tax.

If there are any beneficiaries of the state lottery besides bureaucrats, it is the middle and upper-income classes. The "education" lottery provides scholarships for mediocre high school graduates; however, almost all of this money goes to upper-income families. The program requires all students to apply for federal aid and scholarship programs, so the poor and minorities are funded not by the lottery but by our federal taxes.

The highly touted Georgia lottery is just a bunch of hot political air. Over the first several years of the lottery, the population of the state increased by over 12%, but the college student population increased by only 1% and most kids loose their scholarships after one year. The big beneficiaries have been the college bureaucracies where salaries and payrolls have been pumped upwards with lottery money.

The "success" of the Georgia lottery is due to several factors. First, lotteries always do better in the beginning, but revenue growth fades as the lottery (and its customers) mature. Second, the economy has been growing at a rapid rate, which has pushed up ticket sales.

Third and most importantly, Georgia is surrounded by non-lottery states such as Alabama, South Carolina and Tennessee. Customers from these states have dumped hundreds of millions of dollars into the Georgia lottery and have greatly improved its profit margin.

Georgia’s gloating has inspired legislatures in Alabama and South Carolina to actively pursue a lottery; Tennessee is also considering lottery legislation. If all three states adopt the lottery tax, revenues and profits will fall in Georgia at a time when more Georgians will be sick and tired of the lottery tax.

Lottery taxes are also known to be the most unstable source of government revenues so if the Georgia economy were to go into recession at the same time, gloat could turn into goat; the house could come tumbling down.

But has the lottery helped education? The answer is clearly no. The biggest impact of the lottery has been grade inflation in both high school and college. When asked about having nothing but B+ students, one Georgia professor quipped that "B" must stand for being there because the quality of students has actually decreased not increased.

Kids are more likely to take easier coursework in high school to get the scholarship and easier majors and electives in college in order to keep their scholarship. The lottery scholarships have also led to charges of provincialism because most Georgia college students stay in Georgia and out-of-state students are being kept out of Georgia schools to make room for local students. The real quality of education in Georgia has fallen as a result.

The lottery is a rip-off. It fleeces its customers of their money. The odds of winning the lottery are incredibly bad. If the Emperor Tiberius started playing the lotto-lottery when he was born in 42BC and he played every week the odds are that he still would not have won. In fact, Tiberius would have to play another 267,198 years before he had a 1 to 1 chance of winning lotto.

Normally government would outlaw a business that offered such outrageously bad odds to its customers and it would tax away such "obscene profits" but in this case it advertises the lottery as a way that everyone can get rich. This is a good lesson about government for the many among us who feel that the government is suppose to protect us from such deceit and plundering.

Even winning the lottery is not as great as the government advertises. A one million-dollar prize is actually only $50,000 per year for twenty years. The government gets to collect the interest, not you. Plus you have to pay taxes on your winnings so you lose another big chunk each year.

Finally, government inflation over twenty years is going to reduce the purchasing power of your winnings--in twenty years your $50,000 payment will only put you near the poverty level. All things considered, a one million dollar prize is really only worth about $400,000. To top it off, studies have shown that most multimillion dollar winners claim that the prize has made their lives worse, not better.

Politicians and bureaucrats love the lottery tax, but it’s a sure losing bet for everyone else.