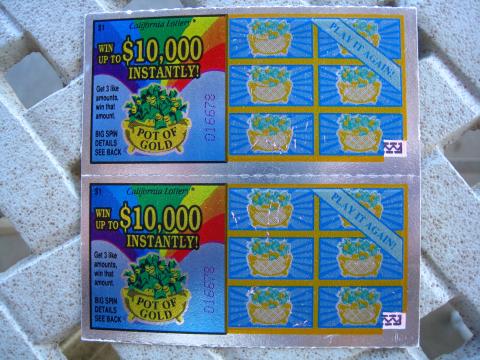 Tags Taxes and SpendingPhilosophy and Methodology

One's chance of winning a top prize in one of the rigged state lotteries is so close to zero as to be indistinguishable from zero. That's what Professor A. K. Dewdney wrote in his book 200% of Nothing.

He estimated the chance of winning a big prize in a state lottery as 1 in 13,983,816. California lottery commission officials apparently don't think those numbers are bad enough.

In their feverish drive to take more money from a citizenry that is already overtaxed, they are looking for an even better bet for the state. And thanks to their flim-flam methods of running their Three-Card Monte lottery games, they have been providing many of their lottery players with the proverbial snowball's chance in hell.

California lottery officials, according to published reports, now concede that, even though the top prizes that induce most people to play these games have been won, some of the games are still "active."

That's a bureaucratic way of saying that citizens keep paying through the nose and getting nothing in return. California Lottery Commission officials, in an internal analysis, conceded the problem goes back to 1996, but came up with some facile answers.

"The lottery in no way justifies this," the commission said in a statement. And, in defending themselves, California officials took an indirect shot at other state lotteries. They intimated that other states may also have problems with their lotteries. "We are actually taking more aggressive steps than our counterparts in other states, including Massachusetts," a spokeswoman for the California lottery games said.

Does this mean there is chicanery going on in the taxing Bay State also? Still, California lottery officials rationalized their problem, saying it had occurred in only 1 to 5 percent of the tickets.

"To the extent there was any perceived problem, it was very small," the commission said. A "perceived" problem?

This is bad enough. But in an interview with the Los Angeles Times, Lottery Commission spokesman Vince Montane said the state has done nothing wrong because people understand that the $100,000 grand prizes may be gone by the time they buy the tickets.

They do? Yes, they do, said our friend in Sacramento. "It's just part of the way the game is structured," Montane said.

(So if I am a California resident and I am caught cheating on my income tax, can I then use as a defense that, "I couldn't help myself. That's just the way my brain is structured.")

Maybe the state attorney general of California is outraged by this practice, which allows lottery games to be sold for sometimes as long as four weeks after the top prize has been awarded. No, the attorney general appears to be in the same pirate ship with Brother Montane, the Ron Ziegler of the California Lottery Commission.

To further complicate the issue, even top state officials can't agree on the law. Herschel Elkins, head of the consumer division of the same state attorney general's office, doesn't agree with the "we-are-above-the-law" school. He says if one conducted a raffle using the same method of the California State Lottery Commission, that would be a violation of state laws against deceptive business practices.

Apparently, these practices are never deceptive when the money--or some of it--goes for state education. So the scratching goes on and on in state after state. The con game goes on.