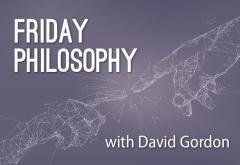 Richard Arneson has been a major figure in political philosophy for the last few decades, and in this week’s article, I’d like to look at some points he raises in his article “Liberal Egalitarian Critiques,” his contribution to The Routledge Companion to Libertarianism, pp. 564–78. In the article, Arneson distinguishes between “hard” libertarianism, which accepts self-ownership and Lockean acquisition of resources, viewing these as rights that are taken as “side constraints” that cannot be violated; and “soft libertarianism,” which accepts these rights but doesn’t take them to be absolute.

Arneson directs most of his attention to the “soft” variety of libertarianism, evidently viewing “hard” libertarianism as absurd. He writes from an “egalitarian liberal” perspective, which holds that libertarians do not give sufficient weight to equality. Egalitarian liberals ground this claim on distributional or relational considerations. According to the distributional position, “there is a fair distributive pattern to which the quality of people’s lives or resource holdings should conform. If Tom or Sally by bad fortune of genetic inheritance or similar bad luck falls through the cracks of market competition, justice puts special priority on improving their condition” (p. 569). The relational egalitarian view is rather different, holding that “what matters for justice is that people relate as equals, as befits their equal dignity as rational agents, able to avoid relations in which some have unreciprocal power over others, de facto authority to command, and hierarchical standing or rank” (p.  570). I think Arneson’s own position inclines more toward the relational view, though he is favorable to the distributional view as well.

Before looking at some of Arneson’s arguments, I should note that in fairness to him (though noting this isn’t required by respect for his libertarian rights), he doesn’t claim to have set forward a full defense of libertarian egalitarianism: “This chapter states liberal egalitarian objections to libertarianism. Arguing conclusively for these objections would be a further matter. At this point there seems to be little recourse except through the long march through reflective equilibrium or coherentist methods—which set of moral views taken as a whole matches our considered convictions after sustained argument?” (p. 577).

One of the “soft” libertarians Arneson discusses is John Tomasi, who holds that although libertarian property rights aren’t absolute, people do have the right to engage in productive economic enterprise, as well as to own personal property as “basic liberties.” Arneson disagrees (or at least represents the liberal egalitarian as disagreeing). He thinks that Robert Nozick, whom he admires, was correct that “liberty upsets patterns,” but Arneson takes this point in a different direction: if the pattern the egalitarian favors requires interference with liberty, so be it. He is not even prepared to grant that people have the right to own homes and books.

In order to be able to carry out any of many wonderful plans of life, one will need some secure control over certain material objects for extended periods of time…. To enjoy a secure home, extended control over some shelter is needed, but this need not involve private ownership of houses. To read books, one needs secure access to particular books, but a public library can satisfy this aim, as can access to books downloadable from the internet onto rented computers…. Consistently with securing for all the wherewithal to pursue any of an indefinitely wide array of worthwhile life plans, a society can choose ownership and property arrangements on instrumental grounds, with a view to promoting a range of justice values. This point is quite compatible with its being the case that private ownership has attractive instrumental properties in some ways, in some contexts. (p. 572)

John Rawls thinks that you cannot be compelled to work in a certain job, but Arneson is ready to challenge this too.

The freedom to seek employment from an array of job opportunities is formal. That liberty might leave unskilled Dick with no employment options except in relevant respects identical options of getting work for bad pay. Alternative arrangements that include elements of a command economy could in some circumstances make everyone better off and should not be ruled out of court a priori as violations of inviolable basic liberty. (p. 573)

In other words, because Dick doesn’t earn high pay, “alternative arrangements” in which the state compels Tom and Jerry to accept certain jobs are fine, so long as everyone is “better off.” It is a bit of a puzzle why, if they are among those better off, Tom and Jerry must be compelled to accept the jobs.

Arneson considers an objection many libertarians raise to egalitarianism. Isn’t what matters to you, or what should matter, how well you are doing, not whether you are equal to others in your society? So long as you have what is sufficient for a good life, why do egalitarian considerations enter the scene at all? If you think they do, you are open to the leveling down objection. “We could achieve equality in wealth and income across persons by destroying resources so that better-off persons drop down to the level of the current worse-off individual” (p. 576).

One response to this argument Arneson offers appeals to a point raised by Derek Parfit, who argues that the benefit you get from something may depend on how much you’d lose if you didn’t get the benefit. (A corresponding rule holds for harms.) It might turn out that poor people would gain more from certain sorts of benefits than a rich person, so we would have grounds for egalitarian redistribution that do not appeal directly to equality as a value.

This argument appears to be a variation of the familiar claim that, because of the diminishing marginal utility of money, a dollar is worth less to a rich person than to a poor one; Arneson mentions “Pigou-Dalton … components of prioritarianism (p. 577n2). Readers will be no doubt be familiar with the Austrian point that interpersonal utility comparisons are invalid, so I will instead say something else. So long as people are doing reasonably well, it is doubtful whether prioritarian considerations would mandate redistribution. Even if you allowed interpersonal utility comparisons, a dollar might not be worth more to a reasonably well-off person than to a rich one.

I’ve concentrated on Arneson’s criticisms of “soft” libertarianism, but he makes one comment that would apply to Rothbardians, whom he doesn’t mention, that astonished me. He says, “Consider the natural duty to promote justice or bring about rights-fulfillment. Since anarchy is a disaster, the natural duty to promote justice straightforwardly implies a duty to establish states, agencies that claim and effectively maintain a monopoly on the legitimate use of violence in a territory and that authoritatively and impartially enforce particular resolutions of them” (p. 568).So much for arguments that private protection agencies could supply protection and justice! Rothbard might never have written a line.