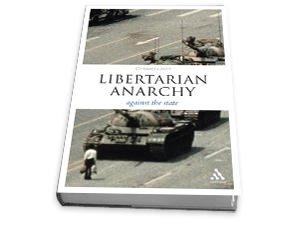 Libertarian Anarchy would have delighted Murray Rothbard. In this book, a distinguished Irish philosopher defends forcefully and eloquently Rothbardian anarchism. Like Rothbard, Casey considers the state a criminal organization, one that by its nature violates essential human rights. To those who say that whatever its failings, the state is nevertheless indispensable, Casey refuses to give ground. Anarchy would not, contrary to its detractors, land us in lawless chaos: law can and has evolved independently of the state.

Concerning Casey's attitude to the state, there is no room for doubt. He says,

States are criminal organizations. All states, not just the obviously totalitarian or repressive ones.… I intend this statement to be understood literally and not as some form of rhetorical exaggeration. The argument is simple. Theft, robbery, kidnapping and murder are all crimes. Those who engage in such activities, whether on their own behalf or on behalf of others are, by definition, criminals. In taxing the people of a country, the state engages in an activity that is morally equivalent to theft or robbery; in putting some people in prison, especially those who are convicted of so-called victimless crimes or when it drafts people into the armed services, the state is guilty of kidnapping or false imprisonment; in engaging in wars that are other than purely defensive, or, even if defensive, when the means of defence employed are disproportionate and indiscriminate, the state is guilty of manslaughter or murder. (p. 1)

Readers of the Mises Daily are likely to applaud; but, unfortunately, Casey's opinion of the state remains a minority view both among the public and among political philosophers. Why do people fail to recognize that calling a group of individuals "the state" confers on it no power to engage in activities normally deemed criminal? Casey answers that the education system bears much of the blame.

In order for the state to function, the mass of the people has to believe in its legitimacy. To that end, the state employs a class of professional apologists and controls the means of propaganda, often through dominance of the education system.… We are brought up to believe in the legitimacy of the state: our state-sponsored education confirms us in this belief and nothing appears to count against it. (p. 27)1

The state violates our rights; but exactly what rights do we have? Here again Casey walks down a Rothbardian path. Self-ownership seems difficult to deny, and a Lockean view of property acquisition goes appropriately with it.

There is something startlingly obvious about the non-aggression principle … we are taught as children not to hit other children and not to take what belongs to them … we do not perhaps normally think of ourselves as something that can be owned but the libertarian self-ownership claim is, at the very least, a rejection of the idea that anyone else owns us. (p. 41)

Casey, in a careful discussion of property rights, holds that natural resources ought to be taken as initially unowned rather than owned by the entire community. If so, why cannot an individual acquire a resource by using it? Locke's theory of property is in essence correct, though it needs to be supplemented by reciprocal recognition of claims to property by the members of the community in which these claims occur.

Casey's analysis strikes me as almost entirely right. In one place, though, I think he goes too far.

If natural resources are initially unowned then while they may be acquired by Andrew they cannot, as a matter of logic, be acquired unjustly. For injustice to enter into the transaction, the acquisition of the resources would have to involve some transgression against some other person, let us say, Barbara. What could this transgression possibly be if not the violation of Barbara's right to those resources which implies that Barbara must have owned these resources before Andrew acquired them from her. The upshot of all this is that if the acquisition is to be unjust it cannot be initial — the resources must already be owned. For any acquisition to be initial the resources acquired have to be unowned. (p. 67, footnote number omitted)

Though I hesitate to disagree with so formidable as logician as Casey, the argument just given seems to me wrong. One problem with it arises with the second sentence in the quotation just given. It need not be the case, as Casey's wording suggests, that the unjust acquisition of property violates the rights of some particular person ("Barbara") to the property that is acquired. Suppose, e.g., that one thinks that no one ought to possess in excess of 25 percent more property than anyone else. Then, Andrew's acquisition of property might be unjust, although it does not violate the rights of one person to the resource acquired as against others whose rights are not violated. I hasten to add that I do not favor such a rule. The point, rather, is that it logically possible, so Casey cannot make good his claim as a matter of logic.

The third sentence of the quotation also seems to me mistaken. Barbara's right to the property that Andrew initially acquires need not be an ownership right, if that is taken to mean a right that excludes someone else. Barbara might have the right to use an unowned resource but not to prevent others from using the resource as well. If so, a challenge by her to Andrew's claim does not imply that she owns the resource. Again, I do not accept the right to use just mentioned: my point is again that this cannot be ruled out as a matter of logic. (To anticipate a rejoinder, the suggestion is not that people start out with "easements" over property.)

Casey has abundantly shown how the state violates rights, but what if it is nevertheless necessary? Must we put up with violations of rights in order to stave off the inevitable chaos that would ensue were a state absent?2 Casey has a very effective answer. Society without a state need not be chaotic: law has by no means been dependent in its evolution on direction by a central authority.

Casey, himself a lawyer, has been influenced here by his teacher, Garrett Barden, and also by the American legal philosopher John Hasnas.3 He sums up his views in this way:

My contention is that in the real world the fundamental cultural institutions of human society — language, law, logic, and morals, are all of them the outcome of a spontaneous evolutionary process which is the creation of no one or no group's design but which is nonetheless rational. (p. 93)

Even if Casey is right, is his contention merely a theorist's fancy, incapable of working in the actual world? To the contrary, Casey points out, anarchic or near-anarchic societies have existed for extended periods; and he discusses the Eskimos, early Irish society, and the Somalis as examples. (He mentions Iceland also but does not discuss it at length.)

Casey presents a strong case for libertarian anarchism; but, again in a way that would have pleased Rothbard, he stresses that libertarianism deals with only one part of morality.

It cannot be too heavily emphasized that the limited, although potent, scope of libertarianism is not intended to deny the importance of love, community, discipline, order, learning or any of the other values that are essential to human flourishing. Libertarians can cherish these values as much as anyone else but, however much they cherish them, they reject any and all attempts to produce them by force, coercion or intimidation. (p. 54)

Casey, as his friends will expect, sometimes uses humor to devastating effect. Writing of Edmund Burke's notion of a transcendent, primeval social contract, he writes,

The passage [from Burke] just considered is not a page from a novel nor yet a stanza of a poem nor a leader in The Daily Telegraph but is, one presumes, a serious and rational attempt to reject mundane contractarianism as the root of the legitimacy of the political order. Shorn of its rhetoric, however, it appears to be … entirely devoid of argument, amounting to a bare assertion that there is a great primeval eternal contract (in Burke's very special sense of that term) that demands our obedience. (pp. 142–43)

Libertarian Anarchy is an outstanding book that confirms Casey's place in the front rank of libertarian political philosophers.