Less Than Zero: The Case for a Falling Price Level in a Growing Economy | Mises Institute
Skip to main content

GET NEWS AND ARTICLES IN YOUR INBOXPrint
A
A
Home | Mises Library | Less Than Zero: The Case for a Falling Price Level in a Growing Economy

Less Than Zero: The Case for a Falling Price Level in a Growing Economy 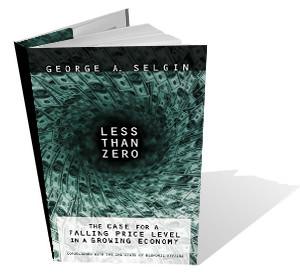 Not long ago, many economists were convinced that monetary policy should aim at achieving "full employment." Those who looked upon monetary expansion as a way to eradicate almost all unemployment failed to appreciate that persistent unemployment is a nonmonetary or "natural" economic condition which no amount of monetary medicine can cure.

Today most of us know better: both theory and experience have taught us that trying to hold unemployment below its "natural rate" through monetary expansion is like trying to relieve a hangover by having another drink: in both cases, the prescribed cure eventually makes the patient worse off.

Heeding this "natural rate" perspective, several governments — including those of Great Britain, the US, Canada, Australia, and New Zealand — have taken or are considering steps to relieve their central banks of responsibility for creating jobs, allowing them to focus instead on something central banks can do: limiting movements in the general level of output prices.

This new trend in monetary policy raises a question of fundamental importance to both economists and policy makers: how should we want the price level to behave?

Many if not most economists today view a constant output price level or "zero inflation" as both a theoretical and a practical ideal. Even some of the more determined critics of a zero inflation policy seem prepared to admit its theoretical merits, opposing it solely on the grounds that getting to zero would be excessively costly.

I believe that zero inflationists are wrong for reasons having nothing to do with transition costs. I am inclined to agree with zero inflationists' claim that the long-run benefits from any credible zero inflation policy, considered as a substitute for today's creeping inflation, would probably exceed that policy's short-run costs. Nonetheless I submit that a constant price level, even once in place, would be far from ideal.

Instead, the price level should be allowed to vary to reflect changes in goods' unit costs of production. I call a pattern of general price level adjustments corresponding to such a rule for individual price changes a "productivity norm."

But one fact at least is beyond dispute: throughout modern history, improvements in aggregate productivity have overshadowed occasional setbacks.

This has been especially true during the last half-century. According to one widely-used estimate, from 1948 to 1976, total factor productivity in the US grew by an average annual rate of two percent. Had a (total factor) productivity norm been in effect during this time, US consumer prices in 1976 would on average have been roughly half as high as they were just after the Second World War. Instead, the US price level nearly tripled, obscuring the reality of falling real unit production costs.

"Even zero inflation would have involved some failure of money price signals to reflect transparently and accurately the true state and progress of real production possibilities."

Other industrialized nations, including the UK, experienced both higher rates of inflation and more rapid productivity growth than the US, so for them the discrepancy between the progress of economic efficiency and that of money prices was even more severe. A policy of "zero inflation" would partially have avoided this odd result.

But only partially: even zero inflation would have involved some failure of money price signals to reflect transparently and accurately the true state and progress of real production possibilities.

Most of the arguments for a productivity norm are far from new. Many can be traced to economic writings of the early 19th century, and were a staple of both classical and neoclassical economic analysis. Prominent economists who made these arguments included David Davidson, Evan Durbin, Francis Edgeworth, Robert Giffen, Gottfried Haberler, Ralph Hawtrey, Friedrich Hayek, Eric Lindahl, Alfred Marshall, Gunnar Myrdal, Dennis Robertson, and Arthur Pigou.

Indeed, as late as the early 1930s, there was at least as much support among well-known economists for some kind of productivity norm as for the alternative of zero inflation.

Even Keynes himself flirted with the idea (which, he noted, was more consistent with stability of money wages), only to reach a verdict favoring zero inflation.

Regrettably, the case for a productivity norm was all but forgotten in the aftermath of the "Keynesian" revolution, which made price-level policy secondary to the goal of achieving "full" employment.

When monetarists once again made control of the price level a primary object of monetary policy, they did so by rehabilitating old arguments for a constant price level, leaving the productivity-norm alternative buried in obscurity.

Today's proponents of zero inflation seldom grapple with the productivity-norm alternative. Usually they just overlook it, as in treatments that pretend to argue for a constant price level when in fact merely arguing against secular inflation.

Typical is The Economist's statement that zero inflation is best "because anything higher interferes with the … ability [of prices] to provide information about relative scarcities."

The alternative of anything lower than zero, such as a price level typically falling (but also occasionally rising) in response to changing productivity, is simply neglected.

Zero inflationists' neglect of the alternative of secular deflation, along with their failure to consider the implications of productivity changes, has led them to embrace a faulty monetary policy ideal.

In model economies where productivity does not change, it is relatively easy to make the case that zero inflation (that is, a constant price level) is consistent with keeping real economic activity on or close to its efficient and "natural" path.

But in reality productivity is constantly changing, generally for the better. In the real world, a little secular deflation, along with upward movements in the price level mirroring adverse supply shocks, would be better than zero inflation.

This article is excerpted from the introduction to Less than Zero, pp. 9–13.