The Left, The Right, and The State | Mises Institute
Skip to main content

GET NEWS AND ARTICLES IN YOUR INBOXPrint
A
A
Home | Mises Library | The Left, The Right, and The State

The Left, The Right, and The State 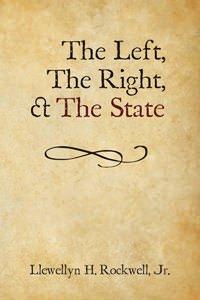 [This is the introduction to The Left, the Right, and the State.]

In American political culture, and world political culture too, the divide concerns in what way the state's power should be expanded. The Left has a laundry list and the Right does too. Both represent a grave threat to the only political position that is truly beneficial to the world and its inhabitants: liberty. What is the state? It is the group within society that claims for itself the exclusive right to rule everyone under a special set of laws that permit it to do to others what everyone else is rightly prohibited from doing, namely aggressing against person and property.

Why would any society permit such a gang to enjoy an unchallenged legal privilege? Here is where ideology comes into play. The reality of the state is that it is a looting and killing machine. So why do so many people cheer for its expansion? Indeed, why do we tolerate its existence at all? The very idea of the state is so implausible on its face that the state must wear an ideological garb as means of compelling popular support. Ancient states had one or two: they would protect you from enemies and/or they were ordained by the gods. To greater and lesser extents, all modern states still employ these rationales, but the democratic state in the developed world is more complex. It uses a huge range of ideological rationales — parsed out between Left and Right — that reflect social and cultural priorities of niche groups, even when many of these rationales are contradictory.

The Left wants the state to distribute wealth, to bring about equality, to rein in businesses, to give workers a boost, to provide for the poor, to protect the environment. I address many of these rationales in this book, with an eye toward particular topics in the news.

The Right, on the other hand, wants the state to punish evildoers, to boost the family, to subsidize upright ways of living, to create security against foreign enemies, to make the culture cohere, and to go to war to give ourselves a sense of national identity. I also address these rationales.

So how are these competing interests resolved? They logroll and call it democracy. The Left and Right agree to let each other have their way, provided nothing is done to injure the interests of one or the other. The trick is to keep the balance. Who is in power is really about which way the log is rolling. And there you have the modern state in a nutshell. Although it has ancestors in such regimes as Lincoln's and Wilson's, the genesis of the modern state is in the interwar period, when the idea of the laissez-faire society fell into disrepute — the result of the mistaken view that the free market brought us economic depression. So we had the New Deal, which was a democratic hybrid of socialism and fascism. The old liberals were nearly extinct.

The United States then fought a war against the totalitarian state, allied to a totalitarian state, and the winner was leviathan itself. Our leviathan doesn't always have a chief executive who struts around in a military costume, but he enjoys powers that caesars of old would have envied. The total state today is more soothing and slick than it was in its interwar infancy, but it is no less opposed to the ideals advanced in these pages. How much further would the state have advanced had Mises and Rothbard and many others not dedicated their lives to freedom? We must become the intellectual dissidents of our time, rejecting the demands for statism that come from the Left and Right. And we must advance a positive program of liberty, which is as radical, fresh, and true as it ever was.