The Left Gets Capitalism Wrong. Yet Again | Mises Institute
Skip to main content

GET NEWS AND ARTICLES IN YOUR INBOXPrint
A
A
Home | Mises Library | The Left Gets Capitalism Wrong. Yet Again

The Left Gets Capitalism Wrong. Yet Again 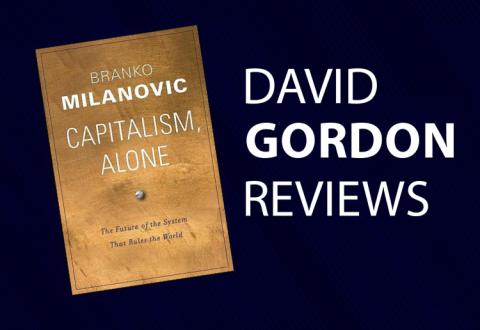 Capitalism Alone: The Future of the System That Rules the World
By Branko Milanovic
Harvard University Press, 2019
287 pages

At first, one might be tempted to toss this book aside. Milanovic, who used to be lead economist at the World Bank’s research department, is a specialist in global inequality. He esteems the work of Thomas Piketty. He spends a great deal of time on proposals to make “liberal meritocratic capitalism,” his name for the economic system we live in, more egalitarian. If you care more about doing well than about whether people are “equal,” why bother with Capitalism, Alone?

In answer, the book has some good insights, along with bad but instructive arguments. The book’s main thesis can be summarized quickly. The choice the world faces is between two varieties of capitalism, liberal meritocratic and political. America is the foremost example of the first of these, and China of the second. The Chinese system features much more government control.

Why does he think this is the choice the world faces? Why not socialism? His answer is that capitalism is immensely more productive, and that the system pushes people to support the values that sustain it.

The fact that the entire globe now operates according to the same economic principles—production organized for profit using legally free wage labor and mostly privately owned capital, with decentralized coordination—is without historical precedent….None but capitalism remains today, except in very marginal areas with no influence on global development….The uncontested dominion of the capitalist mode of production has its counterpart in the similarly uncontested ideological view that money-making not only is respectable but is the most important objective in people’s lives, an incentive understood by people from all parts of the world and all classes….We live in a world where everybody follows the same rules and understands the same language of profit-making.

Here Milanovic falls for an old fallacy. People wouldn’t try to make more money unless the capitalism pushes them into it:

When money becomes established as the sole criterion by which success is judged (as is the case in hypercommercialized societies) other hierarchical markers vanish (which in general is a good thing), but the society also sends a message that “being rich is glorious,” and that the means used to achieve glory are largely immaterial—as long as one is not caught doing something illegal.

This pressure to make more money cannot be easily escaped:

We thus reach the conclusion again that the only way to defy the commercialized world is by withdrawing from it altogether, either through personal exile in a secluded community, or, in the case of larger groups like nations, by embracing autarky.

Of course this is nonsense. People want a wide variety of goods and services, and making money enables you to obtain those that can be bought. Most people don’t have an irrational craving for money, but they do value prosperity. What is wrong with that? Oddly enough, Milanovic recognizes this himself. In the course of an excellent criticism of the view that robots will cause mass unemployment, he says:

Milanovic launches another criticism of capitalism. If the free market is the best conceivable social system, how do you explain World War I?

Why did fascism and communism become powerful if humanity—and certainly the advanced liberal capitalist countries—was on the right path in 1914? We encounter here a fundamental problem that the liberal capitalist view of history faces: explaining the outbreak of the most destructive war in history (up to that point) within a system that, from a liberal point of view was fully consonant with the highest, most developed and peaceful way of organizing human society.

This argument rests on a misunderstanding. Promoting international trade and peaceful relations was indeed in the interest of the great majority of people in 1914. But it does not follow from this that people judge their interests correctly. The governments of the major European powers in 1914 were dominated by militaristic ideas inimical to peace and prosperity. Given this fact, the outbreak of war is not at all hard to understand. Readers who want further details might with profit consult the classic work of Sidney Bradshaw Fay, The Origins of the World War. Milanovic wrongly takes support for the free market to entail a theory of history that makes the triumph of the market unstoppable once it has arrived.

Milanovic has an answer to this, but it leads him to another fallacy, this one especially instructive. He thinks that imperialist rivalries led inevitably to world war.

World War I did not just come out of the blue: its seeds were contained in conditions prevailing before the war….Lots of income in the hands of the rich…caused a disproportion between the (high) amount of savings and the availability of profitable domestic investments….Several major states all sought to expand their reach in this way at the same time, and imperialist competition ensued. The situation, when translated into European politics, produced the war.

Readers acquainted with Austrian capital theory as found in the works of Mises, Hayek, and Rothbard need no instruction from me on the Keynesian errors in the “oversavings” argument just given. I wish instead to call attention to another fallacy. This is the assumption that a “structural” or “systemic” explanation of a historical event is automatically better than one that stresses individual human decisions. Milanovic takes for granted that this is so but gives no reason for it. He mocks the view, “least convincing of all,” that the outbreak of war stemmed from “the idiosyncrasies of individual actors, mistakes, and accidents (A.J. P. Taylor).” You will find the same undefended position that a “structural” explanation is better than an individualist one in the work of the great contemporary Marxist panjandrum Perry Anderson. It’s a pet peeve of mine.

As I mentioned before, not everything in this book is bad. I’ve already quoted Milanovic’s excellent comment about robots and new technology, and he makes other insightful comments. He mentions.

The fallacy of the lump of labor doctrine, which holds that the total number of jobs is fixed and that as the new machines take over jobs they will cause many workers permanent unemployment….We know that similar fears have always existed and have never been realized. New technologies ended up creating enough new jobs, and actually more and better jobs than those that were lost.

He strikes a decisive blow at a key mistake of the “sustainable growth” movement.

The third “lump” fallacy is the “lump of raw materials and energy” fallacy, the idea of the so-called carrying capacity of the earth. There are of course ultimate geological limits to the supply of raw materials, simply because the earth is finite. (Note however that the cosmos, at least from our small, human perspective is indeed unlimited.) But experience teaches us that the terrestrial limits are much wider than we generally think at any one time because our knowledge of what the earth contains, and how it can be used for our needs, is itself limited by our current level of technology. The better our technology, the more reserves of everything we discover, and the more efficient we are in using them.

These days a universal basic income (UBI) is popular on the left and the right, but Milanovic has no use for it. He finds in it a basic problem:

Society might become very polarized, with, say, some 20 percent of the working-age population choosing not to work at all…while the middle class would. Would such a society, where work is not treated as something intrinsically good and desirable…be considered a good society?

Thus, there are some valuable points in Capitalism, Alone. But they are few and far between. You wouldn’t miss that much if you did toss the book aside.