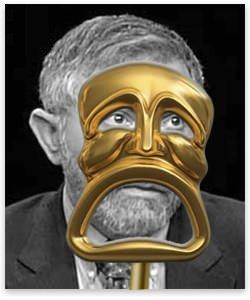 Tags The FedFinancial MarketsMoney and BankingOther Schools of Thought

08/18/2009Robert P. Murphy
In a recent New York Times column, Paul Krugman lamented our society's lavish rewards for bad actors. No, he wasn't criticizing the original cast of Star Trek. Rather, Krugman was bemoaning the hefty earnings that accrue to financial executives. Unfortunately, Krugman's critique is riddled with irrelevant paper citations and internal contradictions. The shocking abuses in today's financial markets would end immediately, if only the government would get out of the sector entirely.

Has Krugman Been Paying Attention?

Krugman opens his piece with some fightin' words:

First the financial industry plunged us into economic crisis, then it was bailed out at taxpayer expense. And now, with the economy still deeply depressed, the industry is paying itself gigantic bonuses. If you aren't outraged, you haven't been paying attention.

Krugman conveniently ignores the role played by the Federal Reserve and the federal government in these shenanigans. Whether or not he endorsed the idea, Krugman was certainly aware that the Fed could engineer a housing bubble; is he now claiming that the Fed had nothing to do with it?

And yes, it is outrageous that reckless Wall Street firms have gotten hundreds of billions (and possibly trillions, if there are defaults on the loans guaranteed by the government) from the taxpayers. But for that to occur, the politicians in DC had to publicly sign off on it; the shareholders of Goldman couldn't simply back the truck up to Treasury. At the time, some of us Austrian economists were kicking and screaming, going so far as to call the Paulson Plan a bank robbery.

Now what was Krugman's view, at the time when he might have been able to spare the public from the giant bailout, which he is now calling outrageous? At first he was skeptical of the Paulson Plan, but only because he favored taxpayer-financed injections of new capital. After Paulson completely changed what he planned to do with the $700 billion that Congress awarded him, Krugman got on board.

I am sure that if Paul Krugman were to read my article, he would go through the roof at this implication. "Hey," he would object, "just because I favored government recapitalization of the banks, doesn't mean I approved of the big bonuses they funded with taxpayer money! If I had been the bank czar, this wouldn't have happened."

Yes that may be true. But is it really so surprising that the politicians and regulators allowed their billionaire buddies to steal from the taxpayers? Krugman is a bit like a college dean explaining to outraged parents, "Yes, I approved the fraternity's plan to have an unchaperoned sleepover at the Kappa Kappa Gamma house, but I made it quite clear at the outset that the line would be drawn at hand-holding. Your concerns have been duly noted, and I will make sure to punish the boys responsible."

Krugman's public lashing of Wall Street isn't over, though. In his recent article he goes on to write,

But crashing the economy and fleecing the taxpayer aren't Wall Street's only sins. Even before the crisis and the bailouts, many financial-industry high-fliers made fortunes through activities that were worthless if not destructive from a social point of view.

Some institutions, including Goldman Sachs, have been using superfast computers to get the jump on other investors, buying or selling stocks a tiny fraction of a second before anyone else can react. Profits from high-frequency trading are one reason Goldman is earning record profits and likely to pay record bonuses.

So why is Krugman upset at Goldman's high-frequency trading? Is it violating a contract they signed with the New York Stock Exchange, perhaps?

Of course not; Krugman doesn't care about property rights per se. He recommends violating them all the time, so long as his model says that's what's best for us all. No, Krugman's objection to high-frequency trading is that, apparently, smart economists have known for decades that it is suboptimal from a social point of view:

But suppose we grant that … Goldman … [is] very good at what they do, and might have earned huge profits even without all that [government] aid. Even so, what they do is bad for America.

Just to be clear: financial speculation can serve a useful purpose. It's good, for example, that futures markets provide an incentive to stockpile heating oil before the weather gets cold and stockpile gasoline ahead of the summer driving season.

But speculation based on information not available to the public at large is a very different matter. As the U.C.L.A. economist Jack Hirshleifer showed back in 1971, such speculation often combines "private profitability" with "social uselessness."

It's hard to imagine a better illustration than high-frequency trading. The stock market is supposed to allocate capital to its most productive uses, for example by helping companies with good ideas raise money. But it's hard to see how traders who place their orders one-thirtieth of a second faster than anyone else do anything to improve that social function.

Just to warn the innocent reader, when Paul Krugman casually cites a famous academic paper to back up his op-ed claims, you really need to go to the actual paper and see if it says what he claims that it says. After all, for years mainstream economists confidently stated that Mises and Hayek had decisively lost the socialist calculation debate, even though, in retrospect, Lange's discussion of how to approximate solutions to a system of equations wasn't all it was cracked up to be.

In the case of Hirshleifer's 1971 paper — the one that Krugman says provides damning arguments against high-frequency trading — here is a paragraph from the introduction:

There is nothing wrong with these simplifying assumptions; you have to start somewhere if you want to build a formal, mathematical model of the economy. But needless to say, a more Austrian approach to understanding the social benefits of stock speculation, would first of all observe that in the real world, the market price does not instantly and automatically adjust to any new information, but instead relies on profit-seeking speculators to move it in the correct direction. Hirshleifer's model, whatever its merits, assumes away the real-world problems that Austrians think entrepreneurial speculators solve.

Ironically, even on its own terms, Hirshleifer's paper doesn't reach the conclusion that Krugman attributes to it. Hirshleifer first deals with a scenario of a "pure exchange economy," in which there is no production, nor even the ability to carry the gifts of nature from time t forward to time t+1. In such a world, it's true, Hirshleifer's model shows that any resources devoted to predicting the future are socially wasteful, because in the aggregate, people can only consume whatever nature chooses to endow them with.

But in the more realistic case, where people can change their plans based on their foreknowledge of future economic conditions, Hirshleifer concludes that speculation may or may not be socially useful. It's an empirical question (in his model), because we have to trade off the resources devoted to private forecasting, against the gain to society from investing resources more appropriately in light of future conditions. It may be that Hirshleifer shares Krugman's conviction on real-world stock speculation, but the 1971 paper yields no such results.1

Krugman Is Against Taxes (Very Briefly)

One of the most amazing passages in Krugman's article demonstrates his supply-side bona fides:

High-frequency trading probably degrades the stock market's function, because it's a kind of tax on investors who lack access to those superfast computers — which means that the money Goldman spends on those computers has a negative effect on national wealth.

Wow! Here we have Krugman admitting that taxes (1) degrade the stock market's function, and (2) have a negative effect on national wealth. When I first read the above, I grinned and thought, "I'll need to save this article, so that the next time Krugman advocates a big tax hike, I can bust him for his hypocrisy!"

Fortunately, I didn't have to wait too long; a mere eight sentences later, Krugman writes, "But [the House rules on pay packages] really should be accompanied by much broader regulation of financial practices — and, I would argue, by higher tax rates on supersized incomes."

If high-frequency trading occurred in a genuinely free stock market, it would presumably be serving some purpose. After all, the belief in "efficient markets" relies on expert traders to quickly move prices after the discovery of new information. However, experience has shown that if Goldman Sachs is making money by doing Activity X, then that is prima facie evidence that Activity X is bad.

Wall Street — especially since this financial crisis began — has been anything but a bastion of laissez-faire capitalism. My guess is that Goldman is indeed ripping people off with its practices. But if you want to understand the difference between good and bad stock market behavior, you shouldn't bother reading Paul Krugman.