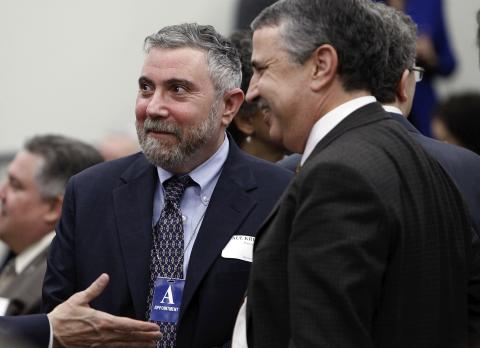 In a recent New York Times op-ed piece called "The Austerity Debacle," columnist Paul Krugman notes how policies in Britain have failed to bring about an economic recovery. In doing so, he contends that the British government's decision to "slash spending" has led to a slower economic recovery as measured by real GDP growth than during the Great Depression. However, as will be shown, the present British government has implemented insignificant spending reductions and continues to run large budget deficits while the British government of the Great Depression followed "austerity" measures much more closely than the present government. Therefore, so far as unrelated historical events provide any evidence, the historical evidence in Britain supports the view that spending cuts bring about larger economic recoveries than deficit spending does.

For Krugman, austerity measures represent the source of serious economic problems in Britain. As a consequence, Krugman remarks,

It turns out that by one important measure — changes in real GDP since the recession began — Britain is doing worse this time than it did during the Great Depression. Four years into the Depression, British GDP had regained its previous peak; four years after the Great Recession began, Britain is nowhere close to regaining its lost ground.… Yes, there are some caveats and complications. But this nonetheless represents a stunning failure of policy. And it's a failure, in particular, of the austerity doctrine that has dominated elite policy discussion both in Europe and, to a large extent, in the United States for the past two years.

Based on a combination of economic problems in Britain and an assertion that austerity caused or exacerbated these problems, Krugman believes he has empirical support for his view that, during recessions, deficit spending promotes economic growth and cutting spending exacerbates economic downturns.

Interestingly, Krugman neglects to provide any data on British government actions. In particular, although he asserts that British policies have simply been to "slash spending," he neglects that Britain ignored the advice of free-market supporters by increasing tax rates significantly, such as raising the top marginal income-tax rate to 50 percent, the capital-gains-tax rate to 28 percent, and the value-added-tax rate to 20 percent. More damaging to his view, as can be seen on tables 25 and 27 of this Organisation for Economic Co-operation and Development (OECD) document, British spending has experienced no significant cuts and still represents a sharp increase compared to prerecession levels.

Although British spending as a percent of GDP fell mildly from 51.1 percent in 2009 to 49.8 percent in 2011, this level still signifies a massive increase in spending from 2007 levels of 43.9 percent of GDP. Similarly, although the British deficit as a percent of GDP fell from 11 percent in 2009 to 9.4 percent in 2011, this deficit still amounts to a huge surge compared to the 2007 level of only 2.8 percent and, with the exception of this recession, exceeds all other deficits in Britain since World War II. Though certainly Keynesians can look at these minor cuts in the scope of government spending as compatible with their theories of how reducing deficits affects the economy, they should emphasize for the sake of honesty that they believe a government that represents half of all the spending in an economy with an essentially record post–World War II deficit of more than 9 percent of GDP is being "austere" so that people who haven't looked at the data can make their own judgments on the merits of the claim.

Although critics of spending cuts can legitimately interpret British data to fit their theories, they cannot gain further evidence through the historical comparison made by Krugman to the Great Depression. As stated above, Krugman believes that British austerity measures have caused the recovery in Britain to be slower than during the Great Depression. In making this claim, he fails to consider the actual fiscal policy of Britain during the Great Depression. After leaving the gold standard in 1931, the British government balanced its budget and reduced spending as a percent of GNP every year until 1935, reducing government spending from a high of 28.8 percent in 1931 to 24.4 percent in 1935.1 Although not ideal — because part of the reduction included tax increases — this policy succeeded in creating small budget surpluses every year from 1929 through 1936 (except for an irrelevant 0.2 percent deficit in 1932) — leading as Krugman mentioned to a faster recovery than the current British policy of a 9 percent-plus deficit as a percent of GDP.2

Comparing the real cuts in 1931 to the 2010 "cuts," which entailed an increase in spending in real terms, it's clear that a historical comparison would better support proponents of spending cuts than Keynesian deficit spending.3 It is truly a strange state of affairs when economists find it reasonable to use the word "austerity" to describe both Britain's balanced budgets and spending reductions in the 1930s and its extremely large deficits without any real spending cuts in 2010. It's also unfortunate that, in making this comparison, they neglect to mention that the balanced-budget economy experienced a stronger recovery.

In reflecting on British stagnation, Krugman laments that economic policy has failed to learn the lesson of the Great Depression. In particular, he states,

Surpassing the track record of the 1930s shouldn't be a tough challenge. Haven't we learned a lot about economic management over the last 80 years?… I'm sorry to say, many economists decided, largely for political reasons, to forget what they used to know. And millions of workers are paying the price for their willful amnesia.

Indeed, it is truly sad that many economists have advocated bad policies, and Britain and other governments have continued to raise taxes and run large budget deficits despite experience that cutting spending in Britain worked better. It's also truly sad that some economists in describing this history have experienced "willful amnesia." For instance, Krugman says that he has read Lionel Robbins's The Great Depression (1934), but he apparently forgot (or ignored) Robbins's contention that Britain balanced its budget in 1931 — that is, before the economic recovery.4

In ignoring the lessons from 80 years ago, the New York Times columnist advocates for less effective policies than those performed at the time, resulting in a slower recovery in the present. Although historical comparisons offer inconclusive evidence at best, Krugman chose to make this specific comparison to bolster his point when, in fact, the historical comparison between Britain during the Great Depression and contemporary Britain conflicts with Krugman's interpretation. Rather than advancing the Keynesian hypothesis, the comparison of British policies over time better supports the view that true spending cuts lead to more robust economic recoveries than the allegedly "austere" policies of Britain today.