Interwar Presidents and the Fantasies of Historians 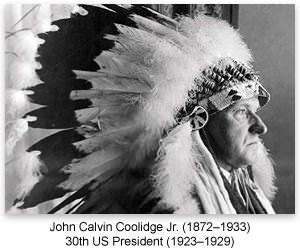 It is understandable, though still harmful, when economists completely mischaracterize the policies of the Herbert Hoover Administration. But in his recent Salon piece on Sarah Palin's new book, historian David Greenberg distorts the legacies of both Calvin Coolidge and his ill-fated successor, Hoover. To set the record straight, it's worth pointing out exactly where Greenberg goes wrong.

The Legend of Silent Cal

Greenberg discusses very little of Palin's book, but instead uses her compliments for Calvin Coolidge to analyze the political right's fascination with the men who presided over the Roaring Twenties. Greenberg is not only a professor of history at Rutgers but also the author of a book on Coolidge. This allows Greenberg to share the following famous — though perhaps apocryphal — anecdotes:

To most people today, Coolidge is little more than a cartoon. If he's remembered at all, he's the grim-faced "Silent Cal," the man said by Theodore Roosevelt's daughter Alice to have looked as though he had been weaned on a pickle. His taciturn style provoked no end of jokes and anecdotes. One hostess, aware of the president's laconic reputation, was said to beseech him at an event, "I made a bet today that I could get more than two words out of you." Not missing a beat, Coolidge replied, "You lose."

Greenberg later mentions that "despite his reputation for silence … Coolidge was a skilled speechmaker — a prizewinning orator as a student and the last president to write most of his own remarks." Although his delivery could be helped with modern teleprompter technology, Coolidge's first recorded presidential address (available on YouTube) is a wonderful critique of government taxes and spending, which at that time was the "stupendous sum" (his words) of $7.5 billion.

Coolidge versus the Progressives

After the fluffy prelude, Greenberg finally gets down to business:

Coolidge's vogue on the right goes beyond the conservative principles he extolled; it lies in his conception of the presidency. He took office at a time when Theodore Roosevelt and Woodrow Wilson had transformed the executive branch, actively using their powers to restrain big business and secure a measure of fairness in economic life. Coolidge, in contrast, believed in a small federal government, a passive executive and light regulation of business. "If the federal government were to go out of existence," he said, "the common run of people would not detect the difference." The main legislative battles of his presidency were to implement the tax cuts favored by his plutocratic Treasury Secretary Andrew W. Mellon. He even balanced the budget.

In the first place, it is always interesting that the historians who are ostensibly concerned about "the little guy" revere US presidents in almost exact proportion to how many people were killed by their subordinates. Beyond Teddy Roosevelt and Woodrow Wilson's wars, however, is their dismal record of economic interventionism.

It is a myth that antitrust legislation, "trust busting," was a vehicle to protect consumers and workers from rapacious big businessmen, as Tom DiLorenzo explains in this lecture. And Woodrow Wilson enjoys the dubious distinction of having ushered in both the Federal Reserve and the federal income tax. Adherents of the Austrian theory of the business cycle know that the Fed fueled the 1920s stock bubble (as well as the housing bubble in our own times), and so can hardly be seen as a promoter of "fairness." But even using empirical mainstream research, one can see that the Fed has been a source of economic instability — as Selgin et al. demonstrate in this article.

As far as federal income-tax rates, it's true that Coolidge took the advice of his Treasury Secretary, Andrew Mellon, to cut them. But that was because they had been raised to an absurd level during World War I. As this history shows, even the rate on the lowest bracket jumped from 1 percent in 1913 to 6 percent by 1918. Moreover, someone who made $20,000 in 1913 paid 1 percent in federal income taxes, but because the brackets were redefined, someone earning the same money income in 1918 paid a whopping 20 percent in federal tax. (Note too that from June 1913 to June 1918 the Consumer Price Index rose 50 percent, so that a given money income purchased far less in actual goods and services.)

In contrast to this onerous burden created under Woodrow Wilson, during the Coolidge years the bottom bracket's tax rate was brought down to 1.5 percent by 1926, while an upper-middle-class (though hardly "filthy rich") household earning $20,000 saw its tax rate slashed to 9 percent.

As far as fiscal responsibility, Coolidge was superlative, perhaps second only to Andrew Jackson, who literally paid off the national debt (as well as slew the central bank). Coolidge had a much more modest success, in that he ran budget surpluses every year he was in office.1

The Myth of the Do-Nothing Hoover

Although I have disagreed with Greenberg's remarks on Teddy Roosevelt, Wilson, and Coolidge, the disagreement largely stems from our differing views on economic theory. But when it comes to the Hoover record, Greenberg simply invents history:

There is another reason, of course, that Coolidge — and not Warren Harding or Herbert Hoover, the other conservative Republicans of the interwar years — has become a hero to the contemporary right. Harding, who was probably more conservative than Coolidge, was discredited by the Teapot Dome affair. … Hoover, who put the small-government philosophy into effect at an hour of crisis, saw it fail utterly. They do not appear in Sarah Palin's new book. (emphasis added)

This is demonstrably false; it would be akin to saying that George W. Bush sat back and did nothing in response to the collapse of Lehman Brothers. It's true, a die-hard interventionist could say Herbert Hoover didn't do enough, but it is simply not true to claim that he "put the small-government philosophy into effect."

Before looking at specifics, consider the broader picture. If it's really true that Herbert Hoover did nothing, and that's why the stock market Crash of 1929 devolved into the Great Depression, then what happened during all the previous crises in American capitalism? After all, there was no New Deal implemented during the panic of 1907, and yet the United States wasn't plunged into double-digit unemployment for a decade. And by many measures, the first year of the 1920–1921 depression was worse than the Great Depression; yet the economy bounced back quickly under the postwar budget slashing of Wilson and then Harding.

As I document in my book on the Depression, Hoover was in fact a big-government conservative. Perhaps his most fateful mistake was pressuring businesses to prop up wage rates after the stock-market crash. Coupled with the ensuing monetary and price deflation, this was a disastrous policy that raised the real wages of labor and contributed to the record levels of unemployment in the early 1930s. Yet here is Hoover's Secretary of Labor, James Davis, congratulating his boss's "accomplishment" in May 1930:

There never has been a crisis such as we have had as the stock market crash that threw … millions out of employment that there wasn't a wholesale reduction in wages. … If Hoover accomplishes nothing more in all of his service to the government, that one outstanding thing of his administration — no reduction in wages — will be a credit that will be forever remembered not by the working classes alone but by business men as well, because without money in the pay envelope business is the first to suffer.2

When recoiling against a leftist professor's praise for Theodore Roosevelt and Woodrow Wilson, there is a dangerous tendency to lavish hosannas on "right-wing" presidents. Although Calvin Coolidge was a fantastic president compared to his peers, he obviously was at least partially to blame for the massive stock bubble that developed in the final years of his administration.

Even so, David Greenberg, as a history professor and author of a book on this period in US history, should know better than to recycle the myth that Herbert Hoover was a laissez-faire ideologue. Even one of FDR's subordinates admitted — years after — that the New Deal had simply extended the pioneering interventions of the Hoover years.