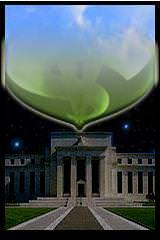 To Austrian economists, the so-called international credit market crisis is a prima facie case of the inherent destructive tendency of government-controlled paper money: it is the consequence of an excessive expansion of credit and money, which encourages uneconomic investment and leads to unsustainable debt burdens. The inflation-provoked cluster of errors (this time in the financial sphere) eventually triggers an economic and political disaster.

Once the inflation-fueled boom (the time span in which malinvestment occurs) is about to turn into bust (the period in which malinvestment is corrected), the government-sponsored central bank steps in and lowers the interest rate, in an effort to reverse the economic downswing into a boom. This is because a policy of pushing down the interest rate via expanding credit and money supply is typically seen as the solution for, rather than the very cause of, the crisis.

The wavelike movement affecting the economic system, the recurrence of periods of boom which are followed by periods of depression, is the unavoidable outcome of the attempts, repeated again and again, to lower the gross market rate of interest by means of credit expansion. There is no means of avoiding the final collapse of a boom brought about by credit expansion. The alternative is only whether the crisis should come sooner as the result of a voluntary abandonment of further credit expansion, or later as a final and total catastrophe of the currency system involved.1

Mises's analysis is not heeded by mainstream economists, who, in view of the credit crisis, argue for cutting central-bank interest rates. Cheaper borrowing costs, they believe, would make credit "easier," thereby stimulating the economy. Suppressed borrowing costs would also bolster asset prices, preventing financial institutions from valuation losses. This line of thinking may explain why the US Federal Reserve slashed interest rates from 5.25% in September 2007 to 3.0% on January 30, 2008.

The Fed's last 50-basis-point rate cuts were meant to "promote moderate growth over time and to mitigate the risks to economic activity," stemming from a troubled financial sector.2 Investors have started losing faith in credit and credit-related products and, as a result, the solidity of financial institutions. With banks in difficulties, the fear is that credit and money supply — after years of strong expansion — could contract and plunge the economy into recession or worse; the period 1929–1933 may come to mind (see graphs below).3

In contrast, Austrian economists, following Mises's work, identify the government-run money-supply monopoly as the very cause of the current debacle. They would actually see a further increase in credit and money supply as a recipe for disaster. What is more, the Austrians' political-economic analysis would suggest that the current credit crisis is most unlikely to end in deflation, but rather in high inflation, with all the bitter consequences for social cooperation and the ideal of the free society.

Where Credit and the Paper Money Supply Come From

It is easy to accelerate inflation in today's government-run fiat-money system. Here, commercial banks hold the state-granted privilege of increasing the money supply through extending loans to, or buying assets from, nonbanks. For doing so, however, banks are required to hold base money, over which the central bank wields monopoly power.

Fractional-reserve banking has become symptomatic for today's government-run fiat-money systems. Take, for instance, the consolidated balance sheet of the US commercial banking sector (as of December 2007). US banks' liabilities in the form of (transaction) deposits exceed banks' cash assets by quite a margin;4 the same holds true for banks' credit supply relative to banks' cash assets.

In what follows, we analyze in some detail the effects the credit crisis and government intervention have on the balance sheet of the banking sector, that is, credit and money supply. It should help to form a view about what the future may hold in store for the value of the currency. To this end, Fig. 1 shows a stylized balance sheet of the commercial banking sector under fractional-reserve banking.

Banks' base-money balances and credit extended to nonbanks (in the form of loans and bonds) are shown on the asset side. Sight and time deposits and long-term liabilities, along with equity capital, are recorded on the right-hand-side of the balance sheet. In our example, the minimum reserve ratio on demand and time deposit is 2%. Given that the stock of demand plus time deposit amounts to US$3000, minimum reserves amount to U$60.5

The lower part of Fig. 1 shows the balance sheet of the central bank. It records securities on the asset side (which represent collateral for extending a base money credit to banks). The liabilities of the central bank are banks' base-money balances. The central bank increases base-money supply when it either buys assets from banks or when it extends loans to nonbanks. Similarly, it decreases the supply when it either sells assets to banks or when it does not revolve outstanding loans to nonbanks.

Our example contains another important feature of the government-controlled money system. Government regulation requires banks to keep a certain ratio between risky assets (loans and bonds) and equity capital. In our example, the capital ratio is 8%.6 Economically speaking, the capital requirement implies a multiplier: with a given US dollar of equity capital, banks can create US$12.5 of credit.

The Effects of Credit Losses

Now we assume that, after years of a credit- and money-fueled boom, borrowers start defaulting. The book value of banks' holdings of loans and bonds needs to be written off by, say, US$65, respectively. As a result, loans are now recorded at US$3,435 and bonds at US$2,935, with banks' equity capital declining to US$390 (Fig. 2).

The write-offs make banks' equity capital ratio drop to 6.1%, which is lower than what banks are required to maintain. Banks would now basically have two options to stay in business: get rid of risky assets or issue new equity.7

For the sake of our example let us assume that banks succeed in selling bonds in the amount of US$1,495 to nonbanks (insurance companies, pension funds, etc.). This brings banks' equity capital ratio back to 8% (Fig. 3). What is more, demand deposits decline to US$5, as nonbanks exchange demand deposits for bonds, so that banks' liabilities in the form of demand deposits are destroyed. Also, banks' excess reserves increase, namely to US$29.90.

However, banks' limited equity capital wouldn't allow expanding credit and money supply any further, whatever the amount of excess reserves. Perhaps even more important, a contraction of the means of payment, accompanied by a sudden stagnation of credit supply, can be expected to exert downward pressure on money prices, production and employment.

In view of an approaching "credit crunch," public opinion would call for lower official interest rates via an increase in credit and money supply. Mises noted: "In the opinion of the public, more inflation and more credit expansion are the only remedy against the evils which inflation and credit expansion have brought about."8

The Government Attempt to Accelerate Inflation

There are basically three strategies the government can pursue to prevent a contraction of the credit and money supply caused by a breakdown of the banking sector.

The first strategy is to inject peoples' tax money into banks, thereby socializing (part of) the domestic banking industry. Under the second strategy, the government would simply buy banks' risky assets, thereby making available (what is left of) banks' equity capital for new lending.

However, it does not take much to see that both strategies might be highly unpopular. In particular, to finance capital injections and/or purchases of banks' risky assets, the government would have to take recourse to tax financing — using either current taxpayer money or, in the case in which the government issues bonds, future taxpayer money.

With remaining excess reserves of US$1,441.10, banks could decide to buy government bonds (for which banks do not have set-aside equity capital), thereby increasing the money supply.10 However, the societal damage of an accelerating inflation would not stop here if the system of fractional-reserve banking under the auspices of the government remains in place.

High Inflation Does Not Solve the Crisis

In fact, it would be naive to assume that a policy of increasing inflation could prevent the economy from collapsing under its debt burden. To show this, assume that the economy's total loan volume in t = 0 is US$100. With a nominal interest rate of, say, 5% p.a. (a real rate of 3% and inflation expectations of 2%), annual interest payments amount to US$5 (Fig. 6). Let us also assume that outstanding loans have a maturity of 5 years, so that 20% of the total loan volume matures every year and needs to be refinanced.

In t = 1, monetary policy surprises the market (or more to the point: cheats the people) by increasing inflation to 4%. With an unchanged real rate, the nominal interest rate rises to 7%. As a result, borrowers' interest costs in t = 1 rise to 5.4% in nominal terms, implying a real interest rate of 1.4%.

Over time, however, the outstanding stock of loans gets refinanced at elevated market interest rates of 7% p.a. In t = 5, the effective interest costs of loans have increased to a nominal rate of 7%, implying a real rate of 3% — the rate that prevailed in t = 0.

That said, surprise inflation can lower the real interest rate burden on outstanding loans only in the short term — at the expense of creditors. However, as long as the money system is based on a relentless increase in bank credit and money supply, it would take ongoing surprise inflation to lower the real debt burden, but such a monetary policy would ultimately lead to hyperinflation.

What is more, the experience of surprise inflation could make investors demand a higher risk premium, thereby increasing the real interest rate on loans. That said, if monetary policy is expected to pursue an inflation policy, the real interest costs on loans outstanding could actually rise — which could lead to even more borrower defaults.

Mises was aware that an inflation policy could not go on forever, but must break down sooner or later:

But then finally the masses wake up. They become suddenly aware of the fact that inflation is a deliberate policy and will go on endlessly. A breakdown occurs. The crack-up boom appears. Everybody is anxious to swap his money against "real" goods, no matter whether he needs them or not, no matter how much money he has to pay for them. Within a very short time, within a few weeks or even days, the things which were used as money are no longer used as media of exchange. They become scrap paper. Nobody wants to give away anything against them.

It was this that happened with the Continental currency in America in 1781, with the French mandats territoriaux in 1796, and with the German Mark in 1923. It will happen again whenever the same conditions appear. If a thing has to be used as a medium of exchange, public opinion must not believe that the quantity of this thing will increase beyond all bounds. Inflation is a policy that cannot last.11