How the NSA Made Your Legal Defense Illegal 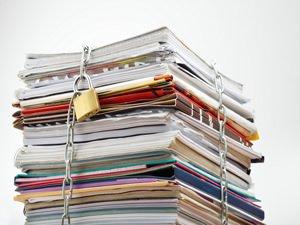 [This article is part of a series. See “Edward Snowden, the NSA, and the US Courts” and “FISA, the NSA, and America’s Secret Court System.”]

We have seen how the NSA’s phony court system has acted as a substitute for genuine judicial review, allowing the NSA to build up precedents purporting to assist its constitutional claims. We have also seen that the NSA is able to obtain surveillance authorization through misrepresentations to the court, without any genuine consequence to the agency, even when discovered. In this Part, we now examine how the NSA shields its activities from review by the public court system, through the control of secret information that could be used as evidence against them.

By virtue of having its system of secret courts, the NSA has been eager to prevent any of its activities coming under scrutiny in the wider public court system. It has accomplished this goal by appealing to the public courts to dismiss claims against them prior to any assessment of the merits of the claim. This has been done by claiming that litigants who seek to challenge its programs lack standing to sue, and that the matters involve “state secrets” which cannot be raised in public courts. The former technique has been particularly successful for the NSA — it has engaged in mass surveillance while simultaneously relying on the fact that no individual litigant can prove that they are affected by the surveillance!

Before turning to the exact details of this argumentative technique, we first consider the general rules of disclosure occurring in litigation. In most legal cases, there are general principles which require the parties to give full disclosure of relevant documentary evidence to the other parties and the courts, in order to make sure that the legal matters are able to be discussed adequately. Of course, one would expect that in matters of security and surveillance there would certainly be some expectation of secrecy, and these general rules would be subject to some competing considerations. However, even in cases where there are legitimate expectations of secrecy, such that parties are not required to give full disclosure of all this evidence, there is still a general principle of litigation that the party in control of a relevant piece of evidence is the one that is expected to put forward that evidence, or suffer an adverse inference from the court if they refrain from doing so.1 Courts have generally required that when a party refrains from putting forward relevant evidence under their own control, and without good reason, it is advisable for the court to draw an adverse inference from this — i.e., if they don’t want us to see it, it must not do them any good.

Legal scholar Stephen Odgers has noted that, “[u]nder the common law, adverse inferences may be drawn from the failure of a party to give or call particular evidence, where such evidence would reasonably have been expected.”2 This principle is manifested in several rules of evidence that have prevailed under common law. This includes the “Jones v. Dunkel rule” applicable in civil proceedings, saying that if one of the parties to a case is in control of some piece of evidence relevant to a disputed matter, then their failure to put forward that evidence may lead to an inference that this evidence would not have assisted their case.3

While some expectation of secrecy is legitimate in surveillance matters, in cases involving the NSA this principle has generally not been applied at all, and the NSA have been free to use their own undisclosed knowledge of the operations of their surveillance programs as a means to lock out critics from proving, or even arguing against the constitutional legitimacy of their surveillance programs. This has been most apparent in the many successful attempts by the NSA to preclude plaintiffs from challenging the constitutionality of their surveillance programs, by arguing that the challengers lack “legal standing” to sue. Briefly, courts require that a person cannot bring a legal case against a party without showing that they are somehow affected by the actions of that party — even if they can prove that the actions are unlawful, they must first show that they have “standing” to sue, in the sense of having been affected by the wrongful actions.

Until the recent whistleblowing against the NSA by Edward Snowden, the agency had created a wonderful legal Catch-22 around this doctrine, aided and abetted by delinquent US courts. In order for a plaintiff to challenge the constitutionality of the NSA’s illegal surveillance programs, the person first had to prove having been subjected to surveillance, in order to show that they have “standing” to bring the case. But of course, the very nature of the program is that it is kept secret, and all evidence which would prove that the plaintiff lies within the scope of the program is “classified.” To obtain this evidence, a plaintiff would have to access classified information, which would then lead them to legal dangers of another kind. Hence, a wonderfully absurd situation has prevailed. Every citizen in the US (and many outside the US) are subjected to this unlawful mass surveillance, but none, until Klayman, have been considered by the courts to have any standing to sue. Moreover, the reason that Klayman was successful in obtaining standing was because he was able to rely on documents leaked by Edward Snowden — leaks which the US government still regards as criminal espionage, punishable by death.

What this has meant, is that the public courts in the US have effectively ruled that to prove that secret mass-surveillance is unconstitutional, it first has to not be secret. This Kafkaesque legal approach has sunk several legal challenges to the NSA surveillance programs, including the high profile case of Clapper v Amnesty International.4 In that case the Supreme Court of the United States ruled that the plaintiffs lacked standing to challenge the constitutionality of the NSA programs, based on the allegedly speculative nature of their claim to have been targets of the surveillance. (Of course, it has since become indisputable that all plaintiffs were indeed within the scope of the surveillance programs.) The attorney for the ACLU described the disturbing trend of judgments that had led to the ruling:

They are supposed to be ensuring that the government’s national security policies are consistent with the Constitution. Instead what’s happening is many of these challenges are being thrown out at the threshold. Different — there are different reasons. Sometimes it’s standing. Sometimes it’s state secrets. Sometimes it’s immunity. But the common thread is that all of these cases are being thrown out even before the courts reach the merits. And that is a disturbing thing that ought to be of concern to everybody.5

In the Amnesty International case the majority of the Supreme Court relied on an assurance by the US government that NSA surveillance would be disclosed by prosecutors to criminal defendants, allowing them standing to challenge the program at a later time. Later prosecutions showed this to be false, and this effectively meant that the programs have been immune from judicial scrutiny.6

In the many cases that have fallen before this doctrine, the NSA has claimed to the court that the claims by the opposing litigants to be within the scope of NSA surveillance are “speculative,” all the while perfectly aware that such claims are in fact true. It has not even been necessary for any NSA witnesses to deny that surveillance of the plaintiff has occurred, which would at least have meant that they would face a choice between disclosure and perjury. Instead, the NSA has simply argued that plaintiffs cannot prove that they are being subjected to surveillance, and therefore they cannot challenge the legality of the actions of the NSA in court. In light of the Snowden leaks this has been a particularly salutary lesson — a demonstration of how the government is able to shield its unlawful actions from judicial review simply by cloaking its operations in secrecy.

Of course, if one were to apply the general common law (and common sense) principles of evidence to this kind of situation, the solution to this impasse would have been quite simple. Since the NSA is the agency with full control of the programs and full knowledge of their scope and operations, they are the ones who should be expected to testify that a plaintiff does not, in fact, fall within the scope of any of its programs. If they fail to do this then the court should draw an appropriate inference. To assert that the plaintiff lacks standing, while hiding the evidence that would disprove this, and criminalizing its disclosure, flies in the face of this evidentiary rule.

In addition to this undermining of the normal rules for putting forward evidence, the NSA and its partners in the “Five Eyes” have further compounded the destruction of traditional legal principles by spying on privileged attorney-client communications. During trade talks involving the US government, Australian intelligence agencies (partnered with the NSA under the “Five Eyes” program) spied on confidential communications between the Indonesian government and its US attorneys, and communicated this information to the NSA.7 This led to protests from the US Bar Association, in view of the erosion of attorney-client confidentiality.

Now that the activities of the NSA have come to light, constitutional scrutiny of the NSA programs is at last winding its way through the public court system. By virtue of the accommodating rulings of the US Supreme Court, the mass surveillance programs have enjoyed a decade-long vacation from constitutional scrutiny, under the de facto immunity imposed by the court. The Klayman case, which is the first to break through this wall, differed from the Amnesty International case in one key respect — the former was decided early in 2012, prior to the Snowden leaks, while the latter had a recent preliminary judgment which came after the Snowden leaks, and was able to rely on that material. This material showed unequivocally that the NSA does indeed engage in mass-surveillance, and that two of the plaintiffs fell within the scope of one of the metadata collection programs. Contrary to the Supreme Court’s suggestions in Clapper v Amnesty International, it was not any government disclosure that allowed standing — it was a disclosure made against the wishes of the government, and treated by them as an act of criminal espionage.