Homesteading for Fun and Survival 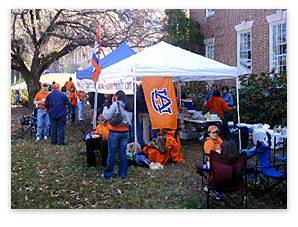 Angelo Mike noted a strange aspect of the Tiananmen Square protests of 1989: before being broken, the students had made an exceptionally organized life for themselves—a cell of ordered liberty on so-called public property in a totalitarian society. For a brief time, they lived and experienced the possibility of self-organized social order but failed to see the implications.

So it is whenever people are confronted with the need to make sense of government-owned space (public property).  Without formal law or title, they assume a kind of ownership of the space through a form of homesteading.

Think of annual parades, gatherings before sports or music events, or any other place where the property is common in name only. The same groups somehow manage to meet year after year in the same spot and hold it for themselves. In practice, the space—limited by the uses to which its temporary owners put it—is treated as if it were owned by the individuals who use it.

Why is this? What does this imply for economics and politics?

In the Lockeo-libertarian tradition, homesteading is a means to establish an initial claim to a scarce resource. It consists of the exercise of purposeful action over nature. The resource is usually land, but it can extend to bodies of water and also animals.

One of the rules of homesteading is that you have to mix your labor with the resource if you are going to claim to own it. This is perfectly reasonable and intuitively correct. Christopher Columbus can't show up to North America and declare that he owns it all anymore than the first settler in space can claim to own the galaxy. The resource must be put to specific use by the claimant.

Today, we rarely see real homesteading in action because much of the land we see already has a legitimate owner. But we do observe many types of informal homesteading, the practice of which underscores the universality of the idea of ownership.

Let us consider a common example: a day at the beach. When people head to the beach, they bring chairs, set up umbrellas and roll out towels. Once their things are in order they have effectively homesteaded that area of the beach for as long as they stay. The area under their tutelage extends beyond the perimeter of their initial space.

Given cultural and density constraints, groups do not usually set up their belongings right next to one another. Rather, some breathing space is left for personal comfort and to allow others to walk between groups.

So how much space is legitimate? Imagine you are standing at the check out lane at the grocery store and the person in front of you turns around and says, "By the way, I am holding 10 spaces behind me."

The response would be: The heck you do!

How about if you are searching for a seat at a theater and are told by one person that he is holding an entire row for some friends who are late? Or what if some guy wants to prevent people from parking in a lot because he says he is using every space when there are no cars there?

In each case, we instinctively recognize the absurdity of those claims. Homesteading stands on solid ground yet its practical application can often be a gray area.

The Case of Mardi Gras

The last weekend of Mardi Gras is well known for the influx of tourists. Some might travel there to drink heavily, others to observe or participate in the debauchery, and others to enjoy the parades and admire the floats.

Whatever their reason for traveling to the Big Easy one thing is certain: it is crowded. And since the parades roll down major avenues, the median (called "neutral ground" by the locals) gets packed with revelers and the problem of land scarcity is exacerbated. There are tens of thousands of people competing for a relatively small amount of space. To make things worse, many Mardi Gras enthusiasts, particularly the residents, often camp early and set aside space to watch the parades later, homesteading their spot.

Mardi Gras tradition has established that anyone who wants to reserve a space on a parade route must do so by setting down a useful and accepted carnival good. Generally, people use tarps, chairs, ladders, grills, or coolers.

Let's return to the hypothetical avaricious homesteader who wishes to claim large spaces for himself. Suppose that he rolls out a piece of tarp that is 100 feet long and 20 feet wide. Further, assume that he is alone.

Just as the farmer cannot simply claim he owns land that he himself has not used, our greedy parade watcher does not have a proper claim to the entire area under the large tarp. What happens with bogus claims? Other groups of people would (and do indeed) see through the farce and call him on it. They could very well order him to release most of the space he has falsely claimed as his own.

Other enforcement techniques could go further. Competing groups could disregard the egregious exaggeration and simply use the wasted space. It could very well come to the use of force. But this would be rare, unnecessary, and counterproductive: a rogue homesteader would have to continually battle with everyone else.

These norms did not occur due to legislation or special mandate. Over the years, people recognized the legitimacy of the first user, the homesteader. Today, the preoccupation is no longer about whether one can homestead a piece of land to watch parades. The worry is about getting there early to be the first one and enjoy the show.

The Case of Tailgating

Tailgating is the practice of gathering together with friends before a sports event to eat, drink, and talk until the game begins, and sometimes to watch the game on television if people find themselves too inebriated to walk to the sports' event.

They sometimes arrive a day in advance, driving their travel trailers and preparing for the long haul. Far from being a mere picnic, this is a huge institution with a tradition that dates far back. Vast sums are spent on food, special clothing, decorations, electronic contraptions, transportation, special grills and refrigeration equipment—all in the interest of tailgating.

The tailgaters gather at spots public and private. The private interests sell space to them for profit. The public authorities permit them to homestead the space because they are pressured to do so by public opinion.

But it is far from being a free for all. Tailgating groups constitute private clubs and they congregate in the same space week after week in the football season, and year after year, even for decades. The groups manage themselves as clubs, with rules letting people in or out of the group. Some are run like dictatorships and other like democracy, but, in each case, the members consent to the management structure.

The space they occupy is as large as necessary for the group, which usually consists of between five and thirty people. Each group claims a space by putting up a tent, parking a trailer, or setting up a large screen television with chairs in front. A claimant who insisted on possessing more than is necessary is quickly set straight by other would-be claimants of this scarce space.

There are enforcement mechanisms to keep people out. Interlopers are scolded, shunned, and sometimes blasted with exhaust fumes and horn blasts. In the culture of tailgating, people have a surprisingly certain sense of ownership, and even others are willing to assist in the enforcement of order lest their own homesteading assumptions come to be challenged.

Year after year, it comes to be known that certain allocations belong to certain tailgating groups. Here is the Jones group. There is the Smith group. There is the Jefferson group. Surprisingly, these homesteading rights are even transferable. If one group falls apart or fails to come together one year, another would-be claimant is notified and given permission to use the space.

This pattern of ownership repeats itself over many acres and even miles of property, with lots of various sizes and shapes honeycombing all available space. To watch a town be transformed in a matter of hours, from unoccupied to completely occupied, and do so in an orderly fashion, without any titles to property being issued, and conflict kept to a minimum, is a thing of enormous beauty, a testament to the capacity of people to organize themselves in the absence of central planner, formalized rules, formal title, or even the opportunity to trade their property at a profit.

So the Lockean rule about mixing one's labor should conjure up no great controversy. It is a principle that is practiced on a regular basis. When public property is truly in demand, it is effectively privatized by the actions of individuals who understand that ownership precedes order. And their claims, however temporary or intertemporally elaborate, are reasonable and enforced by widely accepted norms: what Rothbard called the Relevant Technological Unit, the size of which depends on the type of good or resource in question.

The reality of informal homesteading also illustrates that the concept of ownership is not something that must be imposed by the state or even law. It is built into the very fabric of human action in a world of scarce resources, and it requires massive force to undo. Conjure up visions of equality and collective sharing if you must but in the real world, property and ownership are part of the way we think, act, and get along in the world.