Healthcare and Insurance on a Desert Island 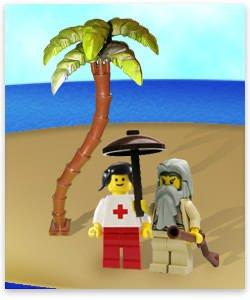 The US healthcare system appears to many people as broken beyond repair. While there is debate on whether government intervention in healthcare and in insurance for healthcare has been helpful or harmful, there is no debate that such intervention has occurred. Similarly, whether one considers the effects of redistributive policies to be helpful or harmful, one can surely agree that something must already exist for it to be redistributed. I would like to consider what healthcare would look like on an idyllic island in order to see how best to fix the US healthcare system.

Consider an idyllic island where there is more food and water available than what is needed by the inhabitants for sustenance. Consider, also, that there is no contact with the outside world, so this island is a closed system. For simplicity, the food source will be fish in the surrounding ocean and the water source is a lake sustained by rainfall.

The initial activities of the inhabitants will be divided into fishing, gathering water, and leisure. Some people will work in spurts and gather surpluses to sustain them during their vacation periods. Some people will do only enough fishing and water gathering each day to maintain them that day.

While the inhabitants can provide for their needs, there are uncertainties to face. Fishing will be affected by the weather. There will be seasonal variations.

An incentive exists for people to accumulate savings of fish and water to sustain them during bad days or bad seasons. Once these savings have been accumulated, however, the gathering activity will return to that needed for sustenance.

These risks are shared equally by everyone, so there is no reason to pool risk. The risk of a rainy day is not insurable other than by self-insurance.

There are a number of hazards on the island. One might cut feet or hands on sharp rocks. There may be predators in the fishing ground. One might sprain an ankle or break a bone climbing a tree or mountain. Thus, a need exists for people to have additional savings to sustain them during illness or injury.

These risks, unlike the risks of bad weather, are not equal. Bad luck and bad habits determine who gets ill and who does not. For now, we will ignore bad habits and look only at bad luck.

A shark bite will be an uncommon event but one that everyone is familiar with. Everyone will see the need for savings to sustain themselves during recovery in case of being bitten. One possibility is that everyone will self-insure and maintain their own savings.

Somebody will notice, however, that shark bites are rare events and that everyone need not have their own savings for a shark bite, but that the group need only take a little from everyone to have a pool of savings to sustain a shark-bite victim.

The insurance premium required from each person will be a lot smaller than what is needed to sustain a shark-bite victim. In fact, the premium would be the savings required to sustain the recovery from a shark bite divided by the number of people, and multiplied by the average prevalence of shark bites.

How might healthcare be distributed? Each person might divert leisure time as needed to deal with his or her own healthcare problems. Like all human activity, however, some people are more skilled in treating shark bites than others.

"Some illnesses are not insurable without destroying the insurance system."

It is quite possible, however, that the time required for treating shark bites would exceed the available leisure time of the most skilled at treating shark bites. In that event, the "doctor" would have to charge fish for his efforts. The remaining inhabitants would have to divert some of their leisure time to catch more fish in order to pay the doctor.

As discussed above, the inhabitants could pool their risk for shark bites and contribute fish premiums to a fund that would pay the doctor to treat shark bites. Presumably the doctor adds value and the recovery time from a shark bite under his care is shorter (and requires less fish) than would otherwise be the case.

I ignored bad habits in the previous discussion. Some people are better at avoiding sharks than others. Over time, everyone will be aware that some people are bitten more often than others. Those who are not bitten very often may not agree to pool their risk with a person who gets bitten as soon as they have recovered from their previous bite.

Prior to making an agreement, some people may not want to insure an individual who has already been bitten badly and who may never recover. Any effort to compel people to accept those less fortunate may result in the individuals with the lowest risk from dropping out of the insurance pool altogether.

It is not possible to fake a shark bite. What about a headache? Suppose an individual demands payment from the insurance pool for disability due to a headache? If one tried to insure against headaches, one might see an epidemic of them, especially during the worst weather. Some illnesses are not insurable without destroying the insurance system.

"Whether insured or not, there are limits to how much healthcare can be demanded."

It is not possible for everyone on the island to become a doctor. In that case everyone would starve.

The only way to support more doctors (or more of any other activity) is for fishing productivity to be high enough that the remaining fishermen can sustain everyone and still have enough leisure time. The group in aggregate must value the other activities more than or equal to additional leisure time.

A common complaint is that healthcare is too expensive. What would happen on the island if the most skilled at treating shark bites demanded all the fish? Either the inhabitants would recover from shark bites without aid or the next most medically skilled would make a more reasonable offer.

The United States has a system where the government guarantees payment for some people (Medicare). Any healthcare provider can choose between leisure time and providing for more people. One can easily see why providers will divert leisure for someone covered by Blue Cross but refuse to do so for someone without means of payment. Government payment therefore determines how healthcare providers will spend their time and effort.

Another common complaint is about preexisting conditions. On our island prior to any insurance agreement, a man with the misfortune of having his leg bitten off would be in no position to demand anything. If he were liked by the other inhabitants, they might very well provide him fish out of kindness.

His chance of continuing to receive kindness would likely depend on whether he managed to contribute anything useful despite his disability. Any attempt to demand that the other inhabitants give him insurance would be laughed at. Note the distinction that the leg was bitten off before the insurance agreement. If the leg had been bitten off after the agreement, the shark victim would be entitled to his support. 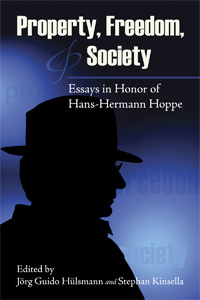 My greatest concern about the US Healthcare system is whether we have reached a point that we cannot catch enough fish to sustain the doctors (or will not divert more leisure to catch the fish required to do so). The Medicare system seems to have been borrowed against future fish.

Professor Hoppe put forward a simple proposal to solve healthcare. His four suggestions appear draconian, but when one considers our island it becomes clear that Hoppe's methods are the only ones that will work.