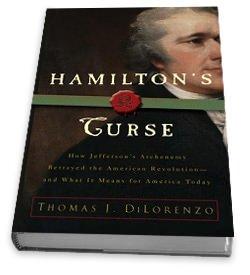 [Hamiltons Curse: How Jefferson's Archenemy Betrayed the American Revolution — and What It Means for Americans Today • By Thomas DiLorenzo • Three Rivers, 2009 • 256 pages. This review originally appeared in the Freeman, February 24, 2010. An MP3 audio file of this article, narrated by Keith Hocker, is available for download.]

The more historical research I read and the more I contrast what economists write with what noneconomists write, the more I am convinced that the bulk of history and biography should be redone. Thomas DiLorenzo, an economics professor at Loyola College in Maryland, explains why:

Most historians are not educated in the field of economics, and political biographers in particular tend to interpret a politician's actions in terms of his stated motives.

What DiLorenzo offers is not a biography of Hamilton but instead a critical examination of his ideas and a historical exploration of how they have shaped American history. DiLorenzo contrasts the statist, mercantilist, and nationalist philosophy of Hamilton with the strict constitutionalism of Jefferson. He portrays Hamilton as a schemer, quoting contemporaries who felt that he was intentionally confusing in his economic proposals as a means of hoodwinking the uninitiated. Above all, DiLorenzo shows how Hamilton's interventionist ideas have had disastrous consequences for America up to the present.

Hamilton's vision for the nation included a strong sense of nationalism, zealous protectionism, enthusiasm for central banking, and methods of constitutional interpretation like the doctrine of "implied powers" that essentially stripped away the Constitution's restraints on the central government. DiLorenzo depicts Hamilton and his intellectual followers as technocrats who view society as a lump of clay for them to fashion with their expert hands. They couldn't grasp the spontaneous order of the free market.

To borrow a phrase from Adam Smith, Hamilton was the quintessential "man of system." In his ideal society he and others who were blessed with inside knowledge of "the common good" would arrange things just so, thereby creating the ideal society. DiLorenzo points out explicit parallels between Hamilton's thinking and Rousseau's idea of "the general will," under which government officials would "force people to be free." Individual liberty holds no importance for such people.

DiLorenzo employs Austrian and public-choice insights to expose the lasting harm we have suffered owing to Hamilton's assortment of big-government ideas. Those ideas later metastasized into the "American System" of Henry Clay (the term was Hamilton's) and the wide-ranging interventionism of Abraham Lincoln. They reached their nadir in the disastrous year 1913, with the adoption of the 17th Amendment (providing for direct election of US senators), passage of the federal income tax, and the establishment of the Federal Reserve. DiLorenzo sees that terrible trio as destroying what was left of Jeffersonianism and shackling the nation, perhaps permanently, with Hamilton's ruinous vision.

The book makes a persuasive case about the harm we endure because of "the curse," but DiLorenzo left me wondering about the relative fragility and robustness of different institutional arrangements. He discusses how constitutional words and phrases like "necessary" and "general welfare" were either grossly misinterpreted or used to usher in all sorts of state interventions, and he refers to the Confederate States of America's attempts to remedy some of these problems in their own Constitution. But the kind of restraint that would have satisfied Jeffersonian strict construction begs to be explored in greater detail.

Only a few years elapsed between the ratification of the Constitution and the violent suppression of Pennsylvania tax rebels (which Hamilton himself led), and not too many years later the United States were (yes, the plural was once used) experimenting with central banking. How did we get so far from Jefferson's vision so quickly? 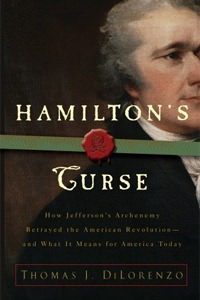 DiLorenzo blames "Hamilton's Disciple," Chief Justice John Marshall, for misreading the Constitution, but I have to wonder if his famous decisions were so obviously a misreading and misapplication. Some libertarians like to believe the Jeffersonian minimalist interpretation is the "real" Constitution while the expansive Hamiltonian view is indefensible, and DiLorenzo seems to accept that view without questioning it.

The exact, intended meaning of the Constitution — if that can even be discerned — is not the focus of DiLorenzo's book, however. Hamilton's Curse explores the intellectual history of some of the ideas that helped transform the United States from a country where the government mostly left people alone into one where the government interferes in their affairs constantly. DiLorenzo reminds us of Richard Weaver's famous quotation that "ideas have consequences" and proceeds to show the terrible consequences of Hamilton's ideas.

This review originally appeared in the Freeman, February 24, 2010.