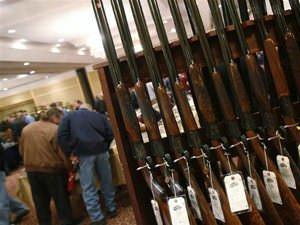 Much has been written about the economics of gun control, including Kjar and Robinson’s 2009 article that noted the lack of basic economic application to the issue, and that there are ample substitutes available to individuals intent on killing people. Although gun violence “dropped dramatically nationwide” over the past two decades, the majority of homicides are still committed with a firearm. Moreover, the FBI has reported that the murder rate in the U.S. has steadily declined for the majority of the past 20 years as gun ownership has surged to an all time high. Unfortunately, mass shootings have not followed that trend. Data shows the incidence of mass shootings is relatively unchanged over the past two decades. News reports certainly make it seem more common but in reality, mass shootings are still extremely rare. Nevertheless, we can easily recall recent shootings such as the Newtown, Connecticut shooting, and more recently, the Naval Yard shooting. In fact, a simple Google search of “mass shootings in 2012 and 2013” produces an overwhelming number of results, with the first being “Mass Shootings in America: A history, 1999 through 2013.” The article notes that since Columbine, there have been 29 additional mass shootings in the U.S. through the Sandy Hook tragedy in Newtown. We’ve had more shootings since then.

Mass shootings continue despite new laws enacted following Sandy Hook. In fact, calls for increased regulation of the gun industry and its proponents is nothing new — it crops up every time there is a tragedy. As noted recently in the Washington Times, attempts to enact “meaningful” legislation on gun control have been going on for 20 years.

Is there a correlation between the incidence of mass shootings and the attempts by lawmakers to outlaw large capacity magazines and certain types of semi-automatic rifles; discussions of new gun laws; and new laws requiring the fingerprinting of gun buyers and creation of a gun owner “registry”? Are Obama’s repeated pleas for more regulation of the gun industry contributing to a relatively inelastic demand for guns and complementary gun accessories? Evidence suggests that might be precisely the case.

No president in contemporary history has been as insistent on passing gun-control legislation as President Obama who signed 23 executive orders related to gun control following Sandy Hook, and continues to lobby for more “action” after every mass shooting. No president in contemporary history has had the number of mass shootings that President Obama has had, either.

Since Sandy Hook, new laws have passed in many states, including Colorado, where two senators in favor of gun control recently lost their seats in a recall vote. Gun manufacturers and manufacturers of complementary products (Magpul Industries, manufacturer of high capacity magazines, for example) operating in such states have looked into and are planning relocations of their businesses to more gun-industry friendly states. The economic impact of losing the gun industry in some of these states will devastate the local community as well as creating a significant loss in tax revenues. These facts seem to be irrelevant in the larger battle on gun control.

Combined with these state and local gun control efforts, President Obama’s repeated calls for increased regulation in effect create a supply shock in the industry. Every time President Obama speaks about outlawing “assault-style” rifles (more accurately known as semi-automatic rifles or modern sporting rifles), gun stores get busy, prices rise, firearm sales spike, and ammunition flies off the shelves faster than one can reload. Higher prices have not slowed sales at all, signaling a relatively inelastic demand, at least in the short run, following a shooting incident and the now predictable call for increased regulation.

Walmart continues to restrict ammunition sales to not more than three boxes per person per day — that is, if you can find anything on the shelf. After Sandy Hook, Walmart sold out of semi-automatic rifles in at least five states, and the price of AR-15s as well as high capacity magazines skyrocketed to nearly double the MSRP at many local gun shops and online gun sellers. Still, buyers found empty shelves for months.

Could it be that the more discussion the nation has about gun control, and the higher the perceived threat of impending legislation that reduces one’s right to bear arms, the greater the likelihood that consumers will seek to buy more guns and more ammunition? Clearly, such public discourse, at a minimum, promotes more gun sales in the short run.

Witness the record purchasing of guns in Maryland the past few weeks before new gun laws went into effect. The Baltimore Sun reports a seven-fold increase in year-over-year sales figures for gun buying, with sales in excess of 1,000 guns per day. Further, The Wall Street Journal and Bloomberg have both noted the “Obama effect” on gun sales. A review of background check statistics kept by the FBI since November 1998 shows a significant increase in year-over-year firearm background checks beginning in 2010 through August 2013, with the current year showing nearly 2.5 million more background checks through August than for all of 2012. 2012 had the largest number of firearm background checks recorded at just over 19.5 million, over 3 million more than the year before.

President Obama might find he can gain a better track record with reducing the incidence of mass shootings by backing away from his repeated cries for more regulation of the gun industry, thereby lessening the supply shocks that are selling guns, high capacity magazines, and ammunition in record numbers, and producing record profits for the industry. This is yet another case where government interference in the market produces a very unintended result. In this case, however, the stakes could be much higher than just supply and demand.

Audrey D. Kline is associate professor of economics at the University of Louisville College of Business.