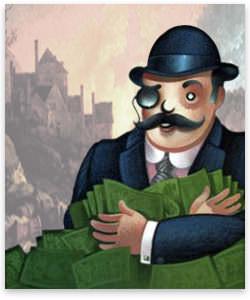 If your landlord or apartment manager hasn't gotten around to fixing your garbage disposal for weeks, how carefully do you think about why? If you are like many people, you simply blame your landlord or manager, rather than inquiring further.

This is an example of greedy-bastard economics: rather than tracing their understanding of something they dislike back to its ultimate source, people only trace it back until they get to someone they can demonize as a greedy bastard. That is, scapegoats become what Frederic Bastiat called "what is seen," while the real cause remains "what is unseen." Unfortunately, that real cause is frequently the coercive hand of government, moving control of resources to itself, and the blame for the resulting consequences to others.

In the case of rental housing, rent control rather than the "greedy-bastard" landlord may be the real cause. Rent control undermines landlords' incentives to provide the services tenants want, because it denies landlords the ability to receive adequate compensation to make their efforts worthwhile. What landlords are blamed for is in fact one of many predictable, adverse consequences of rent control, including housing shortages, increased discrimination, increased uses of subterfuges to evade the controls (like tying willingness to rent to astronomical key deposits or the simultaneous rental of furniture, parking or other goods), reduced construction, and deterioration of the housing stock.

All these predictable effects follow without landlords being any greedier than anyone else (although rent control might attract greedier people, who are more willing to do what it takes to get around the regulations), which should properly places the blame at the feet of the government body that imposed the controls. But instead, government gets to control resources without paying for them, while "greedy-bastard" landlords who would otherwise look for ways to cooperate with renters get the blame.

Rent control is not the only example of the adverse effects of price controls. All price ceilings reduce the quantities traded, wiping out the wealth that would otherwise be created by mutually agreed-upon arrangements. They also increase discrimination (and evasion efforts) by lowering the cost of saying "none for you." And people blame the greedy bastards they deal with directly rather than the greedy bastards in government who are the actual cause and who impose the cost of doing their will on others without compensation.

Price floors such as minimum wage laws, Davis-Bacon "prevailing wage" requirements (which far exceed prevailing wages), and agricultural price supports push allowed prices up instead of down. However, they also increase discrimination (by buyers rather than sellers), and reduce the quantity of mutually agreed arrangements and the wealth they would have created (by making buyers willing to buy less).

All of them increase the costs borne by producers, and therefore by consumers and taxpayers, but place blame on producers rather than the policy makers responsible. And as with all price controls, they make prices, which are the signals of relative scarcity by which social cooperation is maintained, misleading indicators. Market prices are messengers of the effects of government restrictions, but they are not themselves to blame.

Hidden taxes are another mainstay of greedy-bastard economics. They give the government resources and control, but give the blame to those whom people deal with directly. The employer half of Social Security and Medicare is a prime example. Employers must pay 7.65 percent directly to the government, on top of the wages they pay employees.

"Market prices are messengers of the effects of government restrictions, but they are not themselves to blame."

But since employers know they must bear those costs, they offer less pay for a given level of employee productivity. The consequence is anger at employers for not paying employees what they are worth, when any such effect is actually the result of compensation being siphoned off by government.

Similar effects are triggered by employer-paid unemployment, worker's compensation insurance, and other non-wage forms of compensation. The resulting government rake-off from employees' total compensation leaves them less to take home, triggering resentment at employers. But government claims credit for all the benefits those dollars finance.

Corporate taxes, which economists particularly object to for the large distortions and costs to society they cause, are another major example of greedy-bastard economics. To the extent that those higher costs result in higher prices, the corporations are demonized for greed, but government gets the resources. Similarly, to the extent these costs lead to reduced wages, workers blame employers, but government gets the resources. In addition, these taxes reduce the after-tax rate of return on corporate investments, reducing the level of those investments, slowing the growth of worker productivity and the income it would generate.

Similarly, taxes imposed on "not me" are ways for government to claim credit for the resulting spending without the blame for the tax burden. America's highly disproportionate, "soak-the-rich" income-tax burdens are the largest and most obvious example. These income taxes not only finance the largest fraction of government spending, but also allow almost two in five households to have negative income taxes, largely because of the refundable Earned Income Tax Credit.

In addition, taking away a great deal of the after-tax incentive for high-skill individuals to bear the risk and put in the effort to find ways to benefit others reduces the value of output supplied. Thus, it acts as a tax on others when the reduced supply of productive services raises prices.

"Not me" taxes include hotel room taxes, which are largely imposed on people from out of state to finance benefits for residents. They also include import tariffs and quotas, dumping restrictions, and other barriers to international trade. By the time the goods reach consumers, their burdens are already included in the price (as with value-added taxes in other countries), and sellers can once again be blamed for the revenues government receives.

Government mandates and regulations, whose estimated burdens exceed $1 trillion a year, also take advantage of greedy-bastard economics. The web of restrictions is vast, running the gamut from Sarbanes-Oxley burdens to low-income housing set aside to qualify for permission to build, yet buyers are only dimly aware of the burdens these rules impose on producers.

But whatever they are called, those regulations give government added control over resources. And, since they act like taxes (an employer doesn't care whether a $100,000 burden of dealing with government is called a tax or a regulation), they raise costs and prices to others, for which suppliers will largely be blamed.

Similarly, government barriers to entry, like licensing regulations, restrict supply and competition, but focus complaints about prices and shoddy performance on those in the industry. Antitrust laws, which often restrict competition in the name of protecting it, are used to demonize efficient firms and practices. Such laws let the government claim credit for consumer protection even as they undermine the competitive process that is the real protection.

Inflation is another page from the same playbook. While it is caused by government expansion in the money supply, those in government can always point fingers at some greedy bastards other than themselves, whether it is businessmen raising prices or workers demanding higher wages in response.

Greedy-bastard economics is also used to separate responsibility from blame for financial bubbles. For instance, the housing and bad-loan bubble was widely blamed (especially by those overseeing government regulations) on greedy loan originators and unregulated markets. This blame was used to promote increased government intervention as a cure.

"Greedy-bastard economics is also used to separate responsibility from blame for financial bubbles."

But government's hand was everywhere you looked in any serious attempt to understand the alleged "market failure." The Fed's maintenance of interest rates far below what the level of savings would actually sustain made housing falsely profitable. Allegations of redlining led to implicit government requirements that banks lend to borrowers who didn't meet conventional financial standards, and whom banks knew often couldn't repay their debts.

Under pressure for financial malfeasance and other failings, Fannie Mae and Freddie Mac made it clear that they were in the market for "bad" loans in a big way (well over $1 trillion). Given that their hidden subsidies (particularly implicit government guarantees worth over $2 billion a year and lower capital requirements than the rest of the financial system) had made Fannie and Freddie by far the dominant players in mortgage lending, this declaration told others that bad loans were far safer than they really were. No matter how bad the loans, Fannie and Freddie would take them off your hands. When that implicit guarantee suddenly dissolved, market participants (worldwide, not just in the United States) were suddenly faced with the real risks and far-lower values of these assets.

Even the latest healthcare "reform" reflects greedy-bastard economics. Pundits blame insurance companies for rising healthcare costs, yet ignore the plethora of government mandates and restrictions, not to mention subsidies to subgroups of citizens (e.g., the elderly or poor), which raise the costs to everyone else. Similarly, insurance companies are blamed for excessive administrative costs, even though these are directed largely at dealing with fraud, government impositions, and the supposedly obvious waste of profits.

Having tarred insurance companies with the blame, government now proposes more greedy-bastard economics as the solution. Such policies will further increase costs that can be blamed on insurance companies: Companies won't be able to deny coverage for preexisting conditions, which means they must pool higher cost customers in with lower cost customers, thus requiring higher premiums. They will not be able to control risk by putting annual or lifetime caps on coverage, similarly raising costs that must be borne by all policy holders. They will be required to include certain preventative care with no extra charge, and to limit out-of-pocket costs, which also may maim the private markets for catastrophic coverage.

"Government has no power to eliminate scarcity."

In reality, scarcity is the cause of many of the difficult choices individuals face. However, governments prefer to find "greedy-bastard" bogeymen to blame. This allows governments to play as saviors rather than as the parasites causing the problems in order to benefit favored constituencies at others' expense. But government has no power to eliminate scarcity.

Government, beyond its role of defending voluntary arrangements against force and fraud, only makes the effects of scarcity worse. It substitutes decisions by people with worse information and incentives, backed by the power of coercion, for decisions by people with better information and incentives. That is why it is actually government "solutions" that increase the influence of greedy bastards in society. After all, "greedy bastard" is an excellent description of someone who demands power over others without cost or their willing consent; and falsely blames others to gain it.