GET NEWS AND ARTICLES IN YOUR INBOXPrint
A
A
Home | Mises Library | The Great Centralizer: Lincoln and the Growth of Statism in America

The Great Centralizer: Lincoln and the Growth of Statism in America 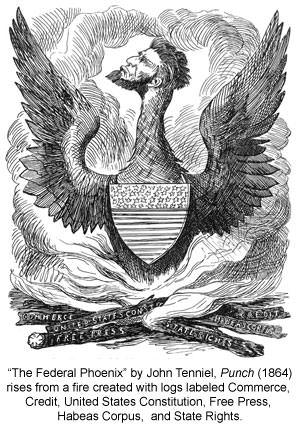 In his 1962 book, Patriotic Gore, Edmund Wilson wrote that "if we would grasp the significance of the Civil War in relation to the history of our time" it is important to realize that the "impulse" for centralized governmental power was very strong in the 19th century, all around the world. Wilson wrote that it was Lincoln, Lenin, and Bismarck who were more responsible than anyone in their respective countries for introducing the plague of centralized governmental bureaucracy. Lincoln became "an uncompromising dictator," and expanded and centralized governmental power in such a way that "all the bad potentialities of the policies he had initiated were realized … in the most undesirable ways."

The Lincoln regime destroyed the system of federalism, or states' rights, that was established by the founding fathers. After the war, the union was no longer voluntary, and all states, North and South, became mere appendages of Washington, DC. Lincoln illegally suspended the writ of habeas corpus and imprisoned tens of thousands of political dissenters without due process; waged total war with the bombing, plundering, and mass murder of some 50,000 of his own citizens; signed ten tariff-raising bills; imposed heavy "sin taxes" on alcohol and tobacco; introduced the first federal income-tax and military-conscription laws; introduced an internal-revenue bureaucracy for the first time; executed thousands of accused deserters from the army; shut down hundreds of opposition newspapers in the Northern states; went off the gold standard and nationalized the money supply; introduced massive corporate-welfare schemes; deported an opposition member of Congress; and exploded the public debt, among other sins. By "targeting and butchering [Southern] civilians," Murray Rothbard wrote in his essay, "America's Two Just Wars: 1775 and 1861" (in John Denson, ed., The Costs of War), "Lincoln and Grant and Sherman paved the way for all the genocidal horrors of the monstrous 20th century." They "opened the Pandora's Box of genocide and the extermination of civilians …"

Commenting on the evils of such centralized governmental power in his book, Omnipotent Government, Ludwig von Mises wrote that, as new powers accrued to governments during the 19th and early 20th centuries, the powers

All of this must be forgotten, Pulitzer prize-winning novelist Robert Penn Warren wrote in his 1961 book, The Legacy of the Civil War. It must be forgotten so that the federal government can perpetuate the lie that it possessed a "treasury of virtue" at the end of the Civil War. All of this virtue supposedly exists to this day, even if it is expressed as "American exceptionalism." With all this "virtue," anything the American state does, no matter how heinous, is said to be virtuous, by definition.

It also "must be forgotten," Warren wrote, that "the Republican platform of 1860 pledged protection to the institution of slavery … and the Republicans were ready, in 1861, to guarantee slavery in the South." It must be forgotten that "in July, 1861, both houses of Congress, by an almost unanimous vote, affirmed that the war was waged not to interfere with the institutions of any state [i.e., slavery] but only to maintain the Union." It must be forgotten, also, that the Emancipation Proclamation was "limited and provisional" in that "slavery was to be abolished only in the seceded states [where the government had no power to free anyone] and only if they did not return to the Union."

"The Lincoln myth is the cornerstone of the ideology of American statism."

It must also be forgotten, I would add, that Great Britain, Spain, France, Denmark, Sweden, the Dutch, and every other country where slavery existed in the 19th century ended slavery peacefully (as the New England states had also done).

We must also forget that most Northern states like New York, where slavery had existed for more than 200 years, "refused to adopt Negro suffrage," Warren wrote, and that Lincoln was as much a white supremacist as any man of his time, announcing in his 1858 Charlestown, Illinois, debate with Stephen Douglas, "I am not, nor ever have been, in favor of bringing about in any way the social and political equality of the white and black races."

The effect of all this forgetfulness about history is that "the man of righteousness tends to be so sure of his own motives that he does not need to inspect consequences" (emphasis added). A further effect of "the conviction of virtue is to make us lie automatically … and then in trying to justify the lie into a kind of superior truth."

This last sentence is a perfect description of modern "Lincoln scholarship" in America. It is mostly a bundle of lies, half-truths, and excuse making, the purpose of which is to portray lies as truth and immoral acts as moral ones. That sentence is also the motivation for my new online Mises Academy course, beginning in January: The Great Centralizer: Lincoln and the Growth of Statism.

The Lincoln myth is the cornerstone of the ideology of American statism. Lincoln was the most-hated president of all time during his own lifetime, as Larry Tagg documents in his book, The Unpopular Mr. Lincoln: The Story of America's Most Reviled President. The fact that he is now the most revered of all American presidents is a result of the work of generations of court historians and statist apologists who have literally rewritten American history in the same manner that the Soviets rewrote Russian history to consolidate their political power. The deification of Abe Lincoln eventually led to the deification of all presidents, and to the American state in general, as Professor Clyde Wilson has written, effectively resurrecting a version of the medieval notion of the divine right of kings. The divine right of kings is now called "American exceptionalism."

The purpose of the course will be to apply the tools of Austrian economics, Austrian political economy, and libertarianism to demystify the Great Centralizer and to seek to learn the truth about the real nature of the American state and its economic interventions. We will not twist and "reinterpret" Lincoln's own speeches to make him, and the state he presided over, look saintly, as is done by all "Lincoln scholars." (The typical method of Lincoln "scholarship" is called "hagiography," which is a religious term that was originally meant to describe studies of the lives of the saints).

Among the topics to be discussed in this six-week online course are Lincoln's real views on race, including his lifelong infatuation with "colonization" or the deportation of all black people from America; his long history as a forceful proponent of Hamiltonian mercantilism in economic policy; the myth of secession as treason and of the union as "perpetual" and "divine"; the abolition of civil liberties in the North during the war; the introduction of total war, including the mass murder of some 50,000 Southern civilians; the economic consequences of the war, including the adoption of the entire Whig/Hamiltonian agenda of protectionism, nationalized banking, corporate welfare, large public debt, and an internal-revenue bureaucracy; and the politics of the Lincoln cult. Students will be asked to read only one publication, my book The Real Lincoln, along with several online articles that will be assigned each week.