Give Us More Tax Revenue, Or Else | Mises Institute
Skip to main content

GET NEWS AND ARTICLES IN YOUR INBOXPrint
A
A
Home | Mises Library | Give Us More Tax Revenue, Or Else 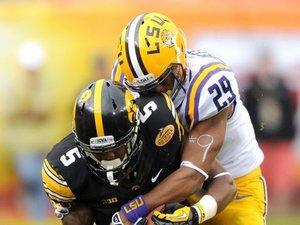 Tags Media and CultureTaxes and Spending

The budget crisis in Louisiana is so bad that it apparently threatens the upcoming college football season. This is according to the state’s new Democratic governor John Bel Edwards. The current yearly budget deficit has reached $940 million. The situation is so dire that higher education in the state faces the realistic possibility of running out of money and taking college sports with it.

Even though all Louisiana state funded colleges are faced with this harsh reality, the focal point of much of the public’s scorn is directed at the possibility of no LSU football this coming season. Much of the old south is Southeastern Conference (SEC) country and college football commands more attention there than even professional sports. Thus, the emotion that comes with the threat of not having LSU football looms much larger in the minds of many Louisianans than the threat of cancellation of other school’s athletics or even the possibility of academic shutdown on campuses. In the land of the SEC, college football will grab headlines over most other issues. This is especially true when its very existence is being threatened.

Upon closer inspection of Louisiana’s state budget, one can see that a major culprit for the deficit has been corporate giveaways. Under former governor Bobby Jindal’s predecessor, money given to the six largest recipients of government subsidies totaled $200 million. But under Jindal, that amount grew to $1 billion. Combine this with the state’s 400 other handouts, plus the raiding of rainy day funds to cover shortfalls and you have a recipe for a budget disaster.

So in order to put Louisiana’s fiscal house back in order, Governor Edwards has proposed one of the largest tax increases in state history. Taxes on cigarettes, alcohol, rental cars and other items are due to be increased as a part of the governor’s proposal. But given that Edwards is facing a legislature controlled by Republicans, many of these tax increases appear unlikely. A bipartisan compromise will probably be reached combining some tax hikes with some spending cuts.

But of all the things to threaten to shut down, why did Edwards target higher education and college sports? The answer lies in an old political trick called Washington Monument Syndrome (or sometimes Mount Rushmore Syndrome). This is a phenomenon where a government facing some sort of revenue shortfall or budget crisis will cut government funds which cause the most visible pain. Once the public witnesses this pain, opinion shifts in a direction that the government desires it to go. In this case, the state’s governor wants to pass certain tax increases. If he doesn’t get what he wants, college football could be cancelled statewide. In the state of Louisiana, few actions would cause more pain and public outcry than the cancellation of a college football season. Thus, a public official will use this to threaten the people he supposedly serves in order to pass his desired legislation.

The peculiar thing about LSU specifically is that they are one of only seven Division One programs which don’t accept state subsidies (the others being Texas, Ohio State, Oklahoma, Penn State, Nebraska, and Purdue). In fact, LSU’s athletic program generated so much revenue last year that it transferred over $10 million to the school’s academic program. Clearly LSU football can survive without taxpayer money, since they do so already. Again, cancelling of the state’s biggest college football program is simply a scare tactic used to further a political agenda. After the aforementioned compromise is most assuredly reached between Edwards and the legislature, politicians from both parties will probably point to LSU’s football team taking the field in the fall as some great political achievement even though the school’s athletic department didn’t need or spend their money in the first place.

As for the rest of the state of Louisiana’s higher education system, this sad state of affairs is an unfortunate lesson in what can happen when government assumes control of an institution. The competency of that institution will be subject to the whims of those who control that government. Any budgetary failings of public officials who dole out this money will inevitably affect those that are so reliant on it. If colleges were independent of government, then the influx of money would not be based on an appropriation from a government but the ability to provide a service (education in this case) to the public. After all, there is no imminent crisis in Louisiana regarding the sale and purchase of food, electronics, or automobiles. This is because people generally spend their own money on these things without intervention from the government. If education were treated like any of these things, then it would be independent of government failings and different educational institutions would be sinking or swimming based on their own merits. But sadly, these colleges and universities will likely not learn their lesson and continue to look for funding from the very organization that is causing their current laundry list of problems.

Matt Doarnberger operates the website libertariansportsfan.com/wp. He is a graduate of Salisbury University and currently...

Whenever government wants to raise taxes, it immediately threatens to cut the most popular government programs first...

Eager to focus on what they're best at, college athletes often gravitate toward the easiest majors and classes. But...