The Ghost That Haunts Brazil 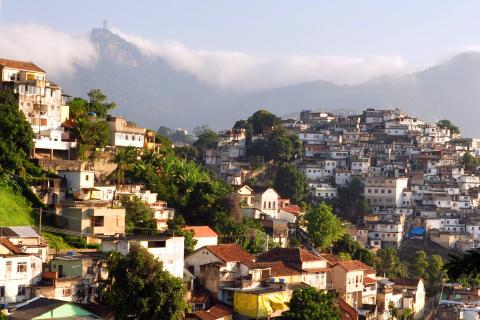 "Ordem e Progresso"--Order and Progress--has been the motto on the Brazilian flag since the country became a republic in 1889. The words are taken directly from the writings of . The ideas of  were adapted in the 19th century by the military and political elites in large parts of  and in  in particular. 1 Since then, the ghost of  has been haunting the subcontinent, and the practical consequences of this ideology have been disastrous.

's positivism is best described as an ideology of social engineering.  (1798-1857) believed that after the theological and the metaphysical stage, mankind would enter the prime stage of "positivism," which to him meant that the society as a whole must be organized according to scientific knowledge.

believed that all science must be modeled after the ideal of physics, and that a new science of social physics would emerge at the top of the intellectual hierarchy. This discipline would discover the social laws that then could be applied by an elite to reform society as a whole. Like medicine, which eradicates disease, social physics would have to be applied in order to remove the social evils.

's ideal was a new "religion of humanity." In his view, people need to be tricked into feeling as authentic what will be instigated by the rulers and their helpers, who thereby serve the higher ideals of humanity. Reviewing Auguste Comte's ideas, John Stuart Mill wrote that this political philosophy aims at establishing ". . . a despotism of society over the individual, surpassing anything contemplated in the political ideal of the most rigid disciplinarian among the ancient philosophers," 2 while Ludwig von Mises remarked: "Comte can be exculpated, as he was insane in the full sense which pathology attaches to this term. But what about his followers?" 3

The rationalist mysticism which befell Comte as a mentally ill person later in his life called for the creation of a "positivist church," in which, imitating the rituals of the Catholic Church, the "cult of humanity" could be practiced. Toward the end of the 19th century, "positivist societies" began to spread in  and a real church building was erected in  as the place where the adoration of the ideal of humanity could be practiced like a religion. 4

Up to the present days, 's system of higher education still bears the marks of 's positivism, and stronger still is the influence of the positivist political philosophy within the higher ranks of the military and among the technocrats. Positivism says that scientism is the trademark of modernity and that in order to accomplish progress, a special technocratic or military class of people is needed who are cognizant of the laws of society and who establish order and promote this progress.

The prevalent ideology of a large part of the ruling elite stands in sharp contrast to the traditions held by the common people. As in most parts of , 's popular culture is deeply marked by the Catholic-scholastic tradition, with its skepticism toward modernity and progress and its more spiritual-religious orientation, which rejects the linear concept of time as a progressive movement in favor of a circular eternal vision of life. 5

's ideas have shown their greatest impact in economic policy. Given the facts that members of the military have played a central role in 's political life and that positivism had become the leading philosophical paradigm at the military schools, economic policy in  has been marked by an interventionist frenzy that affects all aspects of public life.

The spirit of planning for modernity has turned  into a hotbed of economic interventionism, with each new government promising the great leap forward. Instead of doing away with the obstacles that confront emerging private enterprises and guarantee reliable property rights, governments presume that it is their task to develop the country by conceding privileges to a small group of established firms.

Since becoming a republic, there has been not one government in  that did not come up with a new comprehensive plan or a conglomerate of plans aimed at desenvolvimento. Following the positivist agenda, conceiving plans of a seemingly scientific nature and applying them by the force of the state has become the trademark of Brazilian economic policy. Frequently first elaborated in one of the few university centers, these plans form the agenda of the new government, which usually brings in a team of young technocrats for its implementation.

Particularly grandiose when military governments were in charge--such as in the 1930s and 1940s and from 1964 to1984--the invention and implementation of great plans has continued up to the present day. Irrespective of which party coalition or power group is at the helm, the spirit of positivism has been shared by all of them up to the current government, which apparently is practicing a so-called "neo-liberal" economic policy.

Even by counting only the more important plans, the series that has been going on and on for almost a century is quite amazing: After following the model of industrialization through import substitution under the semi-fascist Estado Novo of the 1930s and 1940s, Brazil in the 1950s saw the Plano de Metas and, later on, the Plano Trienal of economic and social development. In the 1970s came the series of National Development Plans. The 1980s brought the Plano Cruzado, the Plano Bresser, and the Plano Verão. In the early 1990s, the  Collor 1 was initiated, to be followed by the  Collor 2 and, later on, by the Plano de Ação Imediata and, in 1994, the Plano Real.

Measured by their declared goals, all of these plans failed. During the past six decades,  has had eight different currencies, each time with a new name and an inflation rate which implies that the current currency would have a rate of exchange of one trillion in terms of the Cruzeiro currency of 1942.6 Under the cover of apparent modernity and science, the established clientilistic network of the "lords of power"7 continues to rule the country. In due course, this class has achieved a level of privileges similar to those that were enjoyed by the nomenclature in the Soviet Union compared to the rest of the population, who have resorted to their peculiar ways--called jeitinho, a kind of chutzpah--as their own method of survival.

Within the positivist system, scientism and interventionism go hand in hand. The presumed rationality of interventionism rests on the premise of knowing the specific outcome of an economic policy measure in advance. Consequently, when things turn out other than expected--and they always do--more intervention and control is warranted. The result is governments that are overwhelmed by their pretense and humiliated by their failures.

, which is so blessed by nature and by an entrepreneurial population with one of the highest rates of self-employment in the world, has been kept down by a misleading ideology. Up to the present days, 's governments have been absorbing the resources of the country in order to pursue chimaeras of modernity and progress as they have defined them and blocking the spontaneous creativity inherent to free markets.

The space for  could be wide open if the ghost that has plagued this country were cast away in favor of an order in the true meaning of the word, i.e., a system of reliable rules based on the principles of property rights, accountability, and free markets.