GET NEWS AND ARTICLES IN YOUR INBOXPrint
A
A
Home | Mises Library | The Fundamental Obstacles to Economic Recovery: Marxism and Keynesianism

The Fundamental Obstacles to Economic Recovery: Marxism and Keynesianism 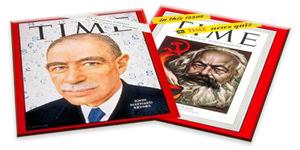 Despite the fact that the freedom of prices and wages to fall is the simple and obvious way to achieve economic recovery, two fundamental obstacles stand in the way. One is the exploitation theory of Karl Marx. The other is the doctrine of unemployment equilibrium, which was propounded by Lord Keynes.

According to Marxism, any freedom of wages to fall is a freedom for capitalists to intensify the exploitation of labor and to drive wages to or even below the level of minimum subsistence. This dire outcome can allegedly be prevented only by government interference in the form of minimum-wage and pro-union legislation. Such legislation, of course, makes reductions in wages simply illegal in all those instances in which the legal minimum wage would have to be breached. It also makes reductions in wages illegal in all those cases in which carrying them out depends on the ability to replace union workers with non-union workers in defiance of existing laws or government regulations. The influence of labor unions on wages pervades the economic system, with government protection of labor unions serving to prevent wages from falling even in companies and industries in which there are no unions. This is because non-union employers must pay wages fairly close to what union workers receive lest their workers too decide to unionize. In that case, the firms would be faced not only with having to pay union wages but also with all of the inefficiencies caused by union work rules.

The Keynesian unemployment equilibrium doctrine claims that it would make no difference even if wages and prices were totally free to fall. In that case, say the Keynesians, all that would happen is that total spending in the economic system would fall in proportion to the fall in wages and prices.

Thus, say the Keynesians, if, in response to an economy-wide fall in total spending of, say, 10 percent, wages and prices also fell by 10 percent, then instead of 90 percent of the original total spending now buying as much as did the original spending, total spending would fall by a further 10 percent. As a result, say the Keynesians, no additional goods or services whatever would be bought; all that would allegedly be accomplished is to make the deflation worse than before, as sales revenues and incomes throughout the economic system fell still further.

In sum, while the influence of Marxism stands directly in the path of a fall in wage rates and prices, by blocking its way with laws and threats, Keynesianism aims to prevent any attempt to overcome these obstacles by allegedly demonstrating the futility and harm of doing so.

Both doctrines are fundamental obstacles in the way of economic recovery and must be deprived of influence over public opinion in order for economic recovery to take place. The prerequisite of this necessary change in public opinion is the existence of a powerful, demonstration of the utter fallaciousness of these doctrines that at the same time proves that a free market is the foundation both of full employment and of progressively rising real wages.

Happily, this demonstration already exists, in full detail. It can be found in my book Capitalism: A Treatise on Economics, in the 269 pages that comprise Chapters 11, 13–15, and 18, which are respectively titled "The Division of Labor and the Concept of Productive Activity," "Productionism, Say's Law, and Unemployment," "The Productivity Theory of Wages," "Aggregate Production, Aggregate Spending, and the Role of Saving in Spending," and "Keynesianism: a Critique."