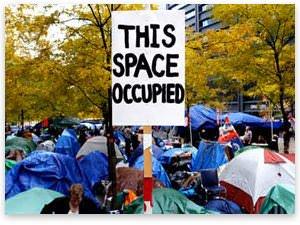 The Occupy Wall Street protesters were allowed to remain in New York's Zuccotti Park for two months, against the will of its private owners. They were clearly trespassers, indeed, much worse than garden variety trespassers, who almost always quickly leave. They were there prepared to stay indefinitely. In effect, they were literally attempting to steal the park from its lawful owners.

Nevertheless, they were allowed to remain, in the belief that to eject them would somehow constitute a violation of their freedom of speech. They had seized the park in order to denounce capitalism. Ejecting them, would have ended their use of the park for that purpose and thus, according to virtually everyone with a public voice, from New York's Mayor to the lowliest media reporter, would have violated their freedom of speech.

A major lesson to be learned from the occupation is that hardly anyone nowadays understands the meaning of freedom of speech. Contrary to the prevailing view, freedom of speech is not the ability to say anything, anywhere, at any time. Actual freedom of speech is consistent with respect for property rights. It presupposes that the speaker has the consent of the owners of any property he uses in speaking, such as the land, sound system, or lecture hall or radio or television studio that he uses.

Of course, the prevailing view is totally incorrect. Actual freedom of speech, based on respect for property owners' rights to use their own property as they see fit, is the guarantor of rational communication. If the property rights of the owners of parks, lecture halls, and radio and television stations are respected, the disrupters will be ejected and very soon will no longer even bother to appear. Rational communication will then proceed without incident.