Free Gas and The Economics of Charity 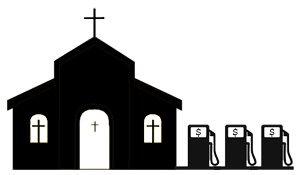 Hurricanes Katrina, Rita, Gustav, and Ike are gone but their legacies will live on. We can learn from disasters and disaster recovery: natural disasters are "teachable moments" because they show how well-intentioned government interventions and even private aid can have unintended negative consequences. Shortages, complaints of "price gouging," and the other usual suspects fill newspaper headlines while economists spit into the Category 5 winds.

People refer to economics as "the dismal science" for a lot of reasons. One reason that has some merit is the difficulty of charity. Recently, Bishop Larry Brandon and his Praise Temple Full Gospel Baptist Cathedral in Shreveport wanted to "offer some relief to citizens in the community from high gas prices due to recent shifts in our economy." Relief came via $25 of free gasoline per car, distributed at five local Murphy USA (Wal-Mart) gas stations, up to a total of $10,000. An area newspaper reported that "Shreveport and Bossier City police will assist with traffic" during the giveaway.

We certainly can't fault the bishop and his congregation for their motives, which are commendable. Indeed, we hope it inspires many others to similar endeavors. Many in his congregation and around the country are affected by high gas prices. For us, it has meant spending about $15 extra per fortnightly fill-up. The church's efforts are a praiseworthy step in the right direction. Since many churches embark on similar endeavors, offering free food during the holidays or free school supplies when school starts, we can use simple economics to analyze the plan and make recommendations for improvements that will help us squeeze even more good out of our charitable dollars.

People blame "recent shifts in our economy" for troubles as if a static market is to be preferred. If there were no shifts, no citizens would need relief. On a macro scale, the legacy of Keynesianism is that the battle against "shifts" is bought at the price of overall prosperity. For the entrepreneur, a "shift" is an opportunity waiting to be explored. For the economist, a "shift" will (or should) ultimately result in a more efficient allocation of scarce resources to their highest valued use.

In the face of Gustav, gasoline demand spiked as southern Louisianans were forced to evacuate. In a free market, the resulting high prices would both encourage more gasoline production and discourage frivolous gasoline consumption, causing any temporary shortage to subside.

Free Wal-Mart gas from Praise Temple achieves the opposite. Is there any guarantee that $10,000 of gasoline will be directed toward its most highly-valued use when it is given away at a zero price? Those fleeing a hurricane would likely pay the higher price that is warranted, but the gas giveaway meant many gallons were given to those out of harm's way, who ultimately consumed several gallons waiting in the long lines for their free $25 fill-up. Programs like these have hidden costs, as well. A further misallocation of our scarce resources occurs when police officers are used to corral bargain shoppers instead of fighting actual crimes.

It is our experience that students intuitively know the importance of prices in equilibrating the quantities supplied and demanded. Parking on our campus lots is free and hence the lots are pretty crowded, much to the dismay of some of our well-off but tardy students. Charging a price of zero, whether for parking or gasoline (or health care), will always result in excess demand, overuse, shortages, and poor quality.

We agree that charity is a virtue, but sometimes well-intentioned plans have undesirable consequences or fail to live up to their potential because they change people's incentives. In the future, let's hope that religious leaders better appreciate the economic realities of our world, and let's hope that economists don't hide their teachings under a bushel basket. If not, there will be many more stranded motorists the next time a hurricane shows up.

Tim Shaughnessy is an associate professor of economics and finance in the College of Business at Louisiana State University in Shreveport. He received his PhD in Economics at Florida State University in 2003. His research generally focuses on public-choice issues, with a recent interest in the spatial effects on voting.