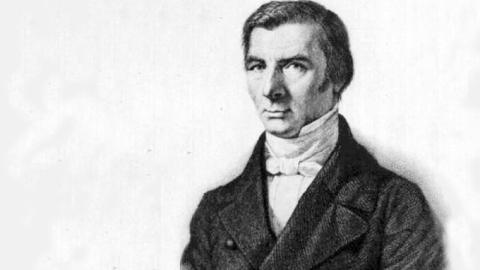 This year marks the bicentennial of the birth of one of history's most ardent defenders of liberty: Frederic Bastiat. Writing just before and immediately after the French Revolution of February 1848, as France was rapidly moving toward socialism, he used logic and satire to expose the fallacies of socialist arguments in several works, including The Law, Economic Sophisms, and That Which Is Seen and That Which Is Not Seen.

His reasoning remains as relevant today as it was then. In fact, his 1848 essay, Government, may be the most insightful critique of America's government available today. To honor him, consider an abbreviated version of that essay (ellipses removed):

I should be glad if you had really discovered a beneficent and inexhaustible being, calling itself the Government, which has bread for all mouths, balm for all sufferings, which can provide for all our wants, correct all our errors, repair all our faults, and exempt us henceforth from the necessity for foresight, prudence, judgment, sagacity, experience, order, economy, temperance, and activity.

Nothing could be more convenient than that we should all of us have within our reach an inexhaustible source of wealth and enlightenment--a universal physician, an unlimited treasure, and an infallible counselor, such as you describe Government to be.

Man recoils from trouble, yet he is condemned by nature to the suffering of privation, if he does not take the trouble to work. What means can he adopt to avoid both? Only one way, which is to enjoy the labor of others. But our disposition to defend our property prevents direct and open plunder from being easy.

The oppressor no longer acts directly and with his own powers upon his victim. The Tyrant is still present, but there is an intermediate person between them, which is the Government. We all therefore, put in our claim, under some pretext or other, and apply to Government. We say to it "I should like to take a part of the possessions of others. But this would be dangerous. Could you not facilitate the thing for me? By this means shall I gain my end with an easy conscience, for the law will have acted for me, and I shall have all the advantages of plunder, without its risk or its disgrace."

We are all making some similar request to the Government; but Government cannot satisfy one party without adding to the labor of the others. Government is the great fiction through which everybody endeavors to live at the expense of everybody else. Every one is, more or less, for profiting by the labors of others. No one would dare to express such a sentiment; he even hides it from himself. A medium is thought of; Government is applied to, and every class in its turn comes and says, "You, who can take justifiably and honestly, take from the public, and we will partake."

Alas, Government is only too much disposed to follow this diabolical advice. Government is not slow to perceive the advantages it may derive from the part which is entrusted to it by the public. It is glad to be the judge and the master of the destinies of all. But the most remarkable part of it is the astonishing blindness of the public through it all. What are we to think of a people who never seem to suspect that reciprocal plunder is no less plunder because it is reciprocal; that it is no less criminal because it is executed legally and with order?

But the thing that never will be seen or conceived is that Government can restore more to the public than it has taken from it. It is radically impossible for it to confer a particular benefit upon any one without inflicting a greater injury upon the community as a whole. Our requisitions, therefore, place it in a dilemma. If it refuses to grant the requests made to it, it is accused of weakness, ill-will, and incapacity. If it endeavors to grant them, it is obliged to load the people with fresh taxes-to do more harm than good.

Thus the public has two hopes, and Government makes two promises--many benefits and no taxes. Hopes and promises, which, being contradictory, can never be realized. The contradiction is forever starting up before it; if it would be philanthropic, it must attend to its exchequer; if it neglects its exchequer, it must abstain from being philanthropic.

In all times, two political systems have been in existence. According to one of them, Government ought to do much, but then it ought to take much. According to the other, this two-fold activity ought to be little felt. We have to choose between these two systems, but exacting everything from Government, without giving it anything, is chimerical, absurd, childish, contradictory, and dangerous.

For ourselves, we consider that Government is and ought to be nothing but the united power of the people, organized, not to be an instrument of oppression and mutual plunder among citizens, but, on the contrary, to secure to every one his own, and to cause justice and security to reign.

Frederic Bastiat even cited an example of a government that accorded well with its legitimate role of protecting its citizen's rights and liberties-the United States. He noted that then, following our Constitution, "there is no chimerical creation, no abstraction, from which the citizens may demand everything. They expect nothing except from themselves and their own energy."

Unfortunately, however, America's current redistributionist state has in many ways moved far closer to the socialism of mid-19th century France than to our Constitution. But the underlying fallacies reflected in today's policies are still those Bastiat refuted long ago. So his arguments remain some of the most powerful and essential ammunition, if we are to ever move back toward the terms of our founding compact.