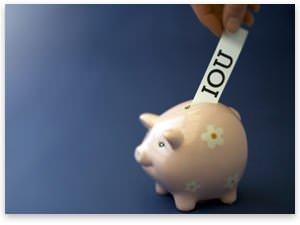 Austrian economics is superior to Marxism in every respect, and this includes internal, sectarian squabbles. When we Austrians feel the time is ripe for another bloodletting — it keeps us strong by thinning the herd once in a while — we argue over fractional-reserve banking.

If you have never had the pleasure of watching such fireworks, I point you to Joe Salerno's recent blog post; it has enough links to bring you up to speed. In the present article, I want to walk through a simple example to make sure everyone understands exactly why some of us think fractional-reserve banking is just plain weird.

Of course, weirdness is not proof of dubiousness, let alone fraud, but bankers who engage in fractional-reserve banking really do "create money out of thin air" in a sense that I think many commentators don't fully appreciate. I offer this article to at least clarify what the ostensible problem is.

Suppose a teenager, Bill, is rummaging in the attic and finds $1,000 in physical currency in an old chest. Bill is ecstatic and runs to the local bank, where he opens a checking account and deposits the green pieces of paper.

Under a 100-percent-reserve banking system, this would be the end of the story. In the act of making the deposit, Bill's currency holdings would fall by $1,000, while his checkbook balance would rise by $1,000. Putting the money in the bank wouldn't affect the total amount of money in the economy.

However, in our current system, Bill's bank would see a new profit opportunity. After the bank put the $1,000 of paper currency into its vault, its reserves would be that much higher, while its outstanding deposit liabilities would have risen by $1,000 as well (in the form of Bill's new checking account). But since banks in the United States are subject only to a reserve requirement of (approximately) 10 percent, the bank would have new excess reserves of $900. If it found a suitable borrower, the bank would have the legal ability to grant a new loan for this amount.

Suppose the bank found such a borrower, Sally, and charged her 5-percent interest for a 12-month loan. Assuming she paid off the loan in a timely manner, here is what the bank's balance sheet would look like at various stages in the process:

As our hypothetical example1 makes clear, with the power of fractional-reserve banking, bankers can apparently earn income out of nothing! So long as Billy leaves his money in the bank, and so long as Sally is able to earn enough revenues from her business to avoid defaulting on her loan, the bank's shareholders end up with $45 of the community's cash, free and clear.

Now, the bank didn't stick a gun in anyone's belly, and the original owners of that $45 voluntarily traded them to Sally in exchange for whatever goods or services her business produced. Still, something seems a bit fishy in that the bank created $900 in new money, earned $45 in "old" money held by the outside community, and then destroyed the $900 when Sally paid back her loan.

Incidentally, it is because of these strange machinations that many critics of our current financial system describe it as "debt-based money." In a very real sense, if people stopped taking out new loans (from banks) and paid off their outstanding loans, the total quantity of money would shrink drastically. In my opinion this would be a good thing — especially if the politicians and the Fed sat back and let it happen — but it is nonetheless a very strange feature of our current system.

Creating Money Out of Thin Air?

Some people deny that commercial banks "create money out of thin air." They agree that the Fed does so when it buys assets by writing a check on itself. However, in our example above, it seems that the commercial bank at worst is taking $900 of "Bill's money" and handing it over to Sally. Sure, that might be dubious, but it's not as blatant as when the Fed literally writes checks drawn on thin air, right?

Actually, I think this standard textbook description — in which each new bank in the sequence creates new loans equal to 90 percent of the new deposit — is a bit misleading. There is nothing in the legal reserve requirement to prevent banks from making new loans that are large multiples of a new deposit. Instead, it is prudence on the part of the banks that enforces this restraint.

To see this, let's repeat the above story but have the bank make a much larger business loan to Sally:

Let's stop at this point and consider what has happened. The bank's balance sheet still checks out — $10,000 in assets and $10,000 in liabilities. So the accountant's head won't explode on account of the large loan to Sally.

But perhaps the bank in our updated scenario is running afoul of the 10-percent reserve requirement enforced by the Fed? Again, no — as of the moment of the new loan to Sally, the bank's total customer checking account balances are $10,000, and the bank has $1,000 in physical currency in its vault, "backing up" those accounts. So the bank is satisfying the 10-percent reserve requirement.

To understand why the bank would be foolish to make a $9,000 loan to Sally after receiving Billy's $1,000 in cash, we must look ahead one step:

Now we see the problem: Presumably, Sally is not going to borrow $9,000 at interest, in order to let that balance sit in her checking account. She is going to spend the money, by writing checks on the account. The people who receive those checks are going to deposit them in their own banks; and, during normal interbank clearing operations, the original bank will receive requests to transfer out $9,000 of its reserves.

We now see why standard economics textbooks have banks only making new loans equal to 90 percent of the amount of each new injection of deposits. The assumption is that the new depositor won't withdraw his money anytime soon, but that the new borrower (i.e., the person getting the loan) will withdraw the money very soon.

Let's be clear though on the moral of the story: in this second scenario — which is not in violation of the reserve requirement (though it might violate capital requirements or other regulations) — the commercial bank is quite obviously "creating money out of thin air."

Consider: The bank received $1,000 in currency from Bill, and it then made a loan of $9,000 to Sally. This new money didn't "come from" anywhere; it existed as soon as the bank clerk changed the numbers on the ledger. Sally went from having $0 in her checking account to having $9,000, with the simple push of a button.

In the present article, we have walked through a simple example to illustrate the strange nature of fractional-reserve banking. In a very real sense, this process creates money out of thin air. This observation alone doesn't prove its illegitimacy, let alone its connection with the business cycle, but it should give pause to those who see nothing wrong with the practice.