GET NEWS AND ARTICLES IN YOUR INBOXPrint
A
A
Home | Mises Library | The Founding Fathers: Smugglers, Tax Evaders, and Traitors 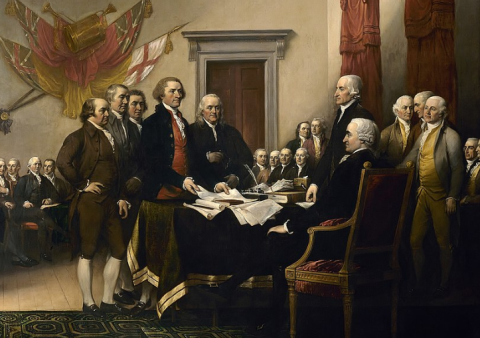 During patriotic holidays, the news media applaud the Founding Fathers. But rarely does anyone mention some important facts about them: that they were smugglers, tax evaders, and traitors.

Not only is this important, it is also praiseworthy; it produced the most advanced civilization ever known.

The Revolution is often said to have begun in 1775 at the Battle of Lexgton. In truth, it began in the 16th century when the first colonists began traveling to the New World. Consider the hardships these people faced. Abandoning their relatives and friends, they boarded small leaky boats like the Mayflower—which was only as long as six automobiles—to spend months crossing 3,000 miles of storm-tossed ocean.

Many of these tiny, primitive vessels went down, yet as the years passed, more and more colonists risked their lives to make the journey. In The Oxford History of the American People, historian Samuel Eliot Morrison tells us:

Gottlieb Mittleberger, who came to Philadelphia in 1750, described the misery during his voyage: bad drinking water and putrid salt meat, excessive heat and crowding, lice so thick that they could be scraped off the body, seas so rough that hatches were battened down and everyone vomited in the foul air; passengers succumbing to dysentery, scurvy, typhus, canker, and mouth-rot. Children under seven, he said, rarely survived the voyage, and in his ship no fewer than thirty-two died. One vessel carrying 400 Palatinate Germans from Rotterdam in August 1738 lost her master and three-quarters of the passengers before stranding on Block Island after a four-month journey.

Why? What in Europe could have been so horrible that rational people would risk their lives and their children's lives to escape it?

Socialism. It wasn't called socialism in those days, but that is what it was—unlimited government control and taxation of everything and everybody. There were no free markets and no free enterprise. Regardless of how honest or hard working a person was, it did him little good unless he was in bed with the government.

Out of desperation many rebelled. They evaded the controIs and taxes, creating an underground economy. In Roots of Capitalism, historian John Chamberlain writes that in France:

For example, it took more than two thousand pages to print the rules established for the textile industry between 1666 and 1730. Weavers had to negotiate with the government for four years in order to obtain permission to introduce "blackwarp" into their fabrics. The effect of the regulations was to freeze French textile production at a certain level, though smuggling and evasion of manufacturing regulations did alleviate the situation somewhat. The violation of the rules often brought terrible penalties: for breaking regulations governing printed calicoes some 16,000 people were either executed or killed in armed brushes with government agents.

America was a vast, uncharted wilderness beyond the reach of the politicians and tax collectors. It was nominally under the control of the European governments, but everyone knew it was too big and too far away for laws to be enforced there.

In short, America was a huge underground economy. Here trade was free and enterprise unrestricted. Taxes were so often evaded that for all practical purposes there were none; a person could keep everything he earned. He could save and invest, and eventually have his own thriving business or farm that would provide jobs for the next wave of immigrants.

You may have seen pictures of the Pine Tree Flag flown by American warships during the Revolution. Why would the colonists put a pine tree on their battle flag?

The government had enacted a regulation saying no colonist could cut down tall, straight trees; these trees were to be reserved for masts on Navy ships. This meant the best, most valuable trees on a person's land had, in effect, been confiscated by the government.

When a government tree inspector would come through the forest to select and mark the best trees, colonists would follow him. These inspectors were highly trained experts, good at identifying the best trees for Navy ships—the Navy ships that were constantly pursuing smuggling ships.

When the government's lumberjacks then came through the forest to collect the marked trees, they would find the trees had already been cut and sold—for use on the smuggling ships.

One of these ships was The Liberty, owned by John Hancock. Hancock was a successful wine merchant known throughout the colonies as "The Prince of Smugglers." His reputation eventually earned him the honor of being the first to sign the Declaration of Independence.

Unfortunately, as the story of the Pine Tree illustrates, America did not remain beyond the reach of government. As the colonists' wealth increased, politicians began making more and more efforts to steal—"tax"—this wealth. More and more bureaucrats and troops were sent to the colonies to enforce laws and shut down the underground economy.

The colonists' reaction was dramatic. The infamous Stamp Tax, for instance, was greeted by armed rebellion; tax collectors were tarred and feathered, a procedure which usually resulted in death. When John Hancock was arrested, the people rioted and the government's agents barely escaped with their lives.

This brings us to one of the most important but forgotten events in American history. In his 1818 analysis of the Revolution, John Adams spoke of it when he asked,

The key word here is religious. In Adams' analysis, he said a sermon delivered by Reverend Jonathan Mayhew on January 30, 1750, was "read by everybody" and was crucially important in leading to revolution.

In that sermon Mayhew argued that there is a Higher Law than any government's law. The people, he said, are required to obey their government's law only when it is in agreement with Higher Law. Indeed, he argued, if the government violates Higher Law, "we are bound to throw off our allegiance" and "to resist."

What was this Higher Law? The ancient Common Law, which most colonists understood and obeyed faithfully even though they ridiculed and ignored the laws and taxes enacted by politicians.

Common Law had evolved from two basic principles: 1) do all you have agreed to do, and 2) do not encroach on other people or their property. These are the two principles on which all major religions and philosophies agree. Each expresses them a bit differently, but all agree on these two laws and not much else).

These two laws are the source of all our essential prohibitions against theft, fraud, murder, rape, etc. "Do all you have agreed to do" is the basis of contract law; "do not encroach on other people or their property" is the basis of criminal and tort law.

Common Law was the law to which the American colonists were dedicated, and it was the law the politicians and bureaucrats were breaking—they were encroaching. So the colonists overthrew their government; they committed treason.

This is what the American Revolution was all about—treason. And this treason was regarded as moral, ethical, and right in every way. It was derived straight from Common Law which was based on the people's religious beliefs. Wrote the great legal scholar Sir William Blackstone, "This law of nature, being coeval with mankind and dictated by God himself, is of course superior in obligation to any other...no human laws are of any validity if contrary to this."

They were enforcing Higher Law. This eternal and immutable law said the politicians and bureaucrats were as human as anyone else and they had no special rights or privileges; they could not encroach on others. "All men are created equal," wrote Thomas Jefferson.

So, the most important and praiseworthy fact about the Founders which is rarely discussed is that they believed in a Higher Law than any government's, and they did something about it. They evaded their government's taxes and regulations. They delivered speeches and wrote pamphlets informing others, and they eventually overthrew their government and set up a new one more closely in agreement with Higher Law.

Mr. Maybury writes on investments and has written 22 books and monographs, including Whatever Happened to Penny Candy? and his Uncle Eric series of books, which focus on economics, law and history.

Mr. Maybury writes on investments and has written 22 books and monographs, including Whatever Happened to...