Fiat Money and the Euro Crisis 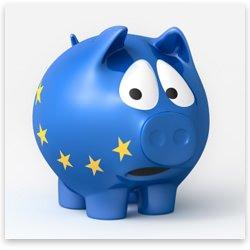 In September I participated in the amazing Supporters Summit, held at the prestigious National Academy of Sciences in Vienna, where Eugen von Böhm-Bawerk once lectured. After my visit to Austria, I piggybacked an excursion to adjacent Slovakia where I was surprised to discover a large number of fans of the Mises Institute and Ron Paul.

Peter Gonda, working through the Conservative Economic Quarterly Lecture Series, had arranged for me to give a lecture, "Money and Banking: the State vs. Market," to two different audiences. (The videos of the lecture and Q&A period are here.) My lecture itself was quite theoretical, discussing the Mengerian/Misesian perspective on the development of money and banking, as well as the Rothbardian perspective on the dangers of central banking and fiat money.

In the Q&A period of the lecture, and during my interviews with local journalists, however, most people wanted to discuss the Greek debt crisis and the fate of the euro. Yet even here I showed the relevance of the Austrian insights: Germany, Slovakia, and the other frugal countries were only in this mess because the euro was a fiat currency. Had it been backed 100 percent by a commodity such as gold, then the Greek government's debts would be irrelevant to outsiders.

Investors are very alarmed that the governments of the so-called PIIGS (Portugal, Ireland, Italy, Greece, and Spain) will default on their bonds. As of this writing, the crisis focuses on Greece, but it may soon spread to other countries. The chart below shows how the foolish bailouts and stimulus spending, coupled with plunging tax receipts, put the governments in fiscal trouble: 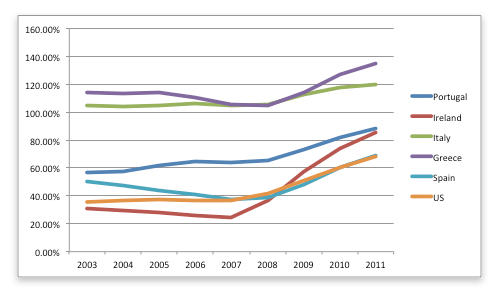 When I was in Slovakia, the burning issue was whether their government should kick in to the European Financial Stability Facility (EFSF), a €440 billion entity that would buy bonds, make guarantees, and engage in other transactions to reduce the stress on debt issued by the beleaguered PIIGS. The Slovaks were historically a poor but frugal people, and many of them resented bailing out the Greeks who were spendthrifts yet had a higher standard of living. (For those who don't like stereotypes, don't send me angry emails: I'm just repeating what the Slovaks told me.)

The average Slovak was in the same unfortunate position as the average American back in the fall of 2008: each was told that they had to pay higher taxes in order to bail out rich people who had made dumb financial decisions. When Americans were told they had to pay for the $700 billion TARP, Treasury secretary Paulson and others warned that failure to do so would lead to a collapse of the banking system. In a similar vein, Europeans today are warned that they need to rescue the PIIGS governments lest the euro itself collapse, taking down the banks with it.

Obviously the Maastricht Treaty's rules were as binding as the Bill of Rights in the United States. Partly aided by shenanigans involving currency swaps designed by Goldman Sachs, the Greek government flouted the limits of deficits for years. Thus here we are, in the very nightmare scenario about which some economists (such as Milton Friedman) warned at the euro's inception.

Lost in all the analysis of the theory of "optimal currency area," the possibilities for a structured default, the consequences of a collapse of the euro, etc., are two simple questions: Why does the behavior of the Greek government have anything to do with taxpayers in Germany? Why did the original Maastricht Treaty have rules about fiscal policy as part of the criteria for monetary union?

The answer is that the euro is a fiat currency, and as such it will always provide rulers with the temptation to monetize fiscal deficits. That's why the citizens of traditionally hawkish Germany — who grew up with horror stories of hyperinflation — would be very wary of joining a currency union with people who elect spendthrift governments and have central bankers who are doves on inflation.

I tried to illustrate the point to my Slovakian audiences with a thought experiment: Suppose that instead of the fiat approach, the euro from day one had been backed 100 percent by gold reserves. In this arrangement, an organization in Brussels would have a printing press and a giant vault. Anybody around the world — whether private citizens or foreign central banks — could order up euros, so long as they deposited the fixed weight of gold in the vault. Thus, at any given time, every single euro in circulation would be backed up by the corresponding gold in the vault in Brussels.

In this scenario, the people issuing the euros wouldn't have to run a background credit check on the people applying for new notes. So long as the requests were made with genuine gold, the people printing euros wouldn't care if the applicant were the German government or Bernie Madoff. Even if some other country had adopted the (gold-backed) euro as its own currency, and then that government defaulted on its bonds, there would be no repercussions for the other regions using the euro as money. People would know that their own euros were backed 100 percent by gold in the vault in Brussels, just as always.

For an American audience, I have another way of illustrating the point. Right now, there is a decent chance that states such as California and Illinois will default on their bonds. Yet this currently doesn't pose problems for other states, nor does it make investors worry about the "fate of the dollarzone." This is because few people expect that the Fed will provide massive intervention to prevent state-level defaults.

However, suppose that the Fed does step in and start buying up massive quantities of bonds issued by California, Illinois, Michigan, etc. At that point — once it became clear that state-level deficits would influence Federal Reserve policy — you very well might see something analogous to the current crisis in Europe. You might see the exchange rate of the dollar against other currencies vary in response to changing reports about the fiscal condition of American state governments.

Since the world left the last vestiges of the gold standard in 1971, the global economy has been set adrift. The technocrats keep assuring us that they can steer the economy much more efficiently than the "obsolete" gold standard, and yet a continual series of crises suggest otherwise. We can achieve the dream of the euro — an integrated monetary union where people and businesses can plan their activities spanning several countries without fear of exchange-rate risk — without its attendant pitfalls, but only if people go back to using genuine commodity money.