The Ethics of Boycotts | Mises Institute
Skip to main content

The Ethics of Boycotts 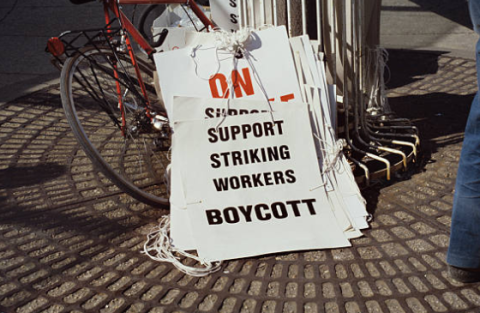 [This article is taken from chapter 18 of The Ethics of Liberty.]

A boycott is an attempt to persuade other people to have nothing to do with some particular person or firm — either socially or in agreeing not to purchase the firm's product. Morally a boycott may be used for absurd, reprehensible, laudatory, or neutral goals. It may be used, for example, to attempt to persuade people not to buy non-union grapes or not to buy union grapes. From our point of view, the important thing about the boycott is that it is purely voluntary, an act of attempted persuasion, and therefore that it is a perfectly legal and licit instrument of action.

Again, as in the case of libel, a boycott may well diminish a firm's customers and therefore cut into its property values; but such an act is still a perfectly legitimate exercise of free speech and property rights. Whether we wish any particular boycott well or ill depends on our moral values and on our attitudes toward the concrete goal or activity. But a boycott is legitimate per se. If we feel a given boycott to be morally reprehensible, then it is within the rights of those who feel this way to organize a counter-boycott to persuade the consumers otherwise, or to boycott the boycotters. All this is part of the process of dissemination of information and opinion within the framework of the rights of private property.

Furthermore, "secondary" boycotts are also legitimate, despite their outlawry under our current labor laws. In a secondary boycott, labor unions try to persuade consumers not to buy from firms who deal with non-union (primary boycotted) firms. Again, in a free society, it should be their right to try such persuasion, just as it is the right of their opponents to counter with an opposing boycott. In the same way it is the right of the League of Decency to try to organize a boycott of pornographic motion pictures, just as it would be the right of opposing forces to organize a boycott of those who give in to the league's boycott.

Of particular interest here is that the boycott is a device which can be used by people who wish to take action against those who engage in activities which we consider licit but which they consider immoral. Thus, while non-union firms, pornography, libel, or whatever would be legal in a free society, so would it be the right of those who find such activities morally repugnant to organize boycotts against those who perform such activities. Any action would be legal in the libertarian society, provided that it does not invade property rights (whether of self-ownership or of material objects), and this would include boycotts against such activities, or counter-boycotts against the boycotters. The point is that coercion is not the only action that can be taken against what some consider to be immoral persons or activities; there are also such voluntary and persuasive actions as the boycott.

Whether picketing as a form of advertising a boycott would be legitimate in a free society is a far more complex question. Obviously, mass picketing that blocked entrance or egress from a building would be criminal and invasive of the rights of property — as would be sit-ins and sit-down strikes that forcibly occupied the property of others. Also invasive would be the type of picketing in which demonstrators threatened people who crossed the picket line — a clear case of intimidation by threat of violence.

But even "peaceful picketing" is a complex question, for once again the use of government streets is involved. And, as in the case of assembly or street demonstrations generally, the government cannot make a non-arbitrary decision between the rights of taxpayers to use government streets to demonstrate their cause, and the right of the building owner and of traffic to use the streets as well. Again, it is impossible for government to decide in such a way as to eliminate conflict and to uphold rights in a clear-cut manner. If, on the other hand, the street in front of the picketed building were owned by private owners, then these owners would have the absolute right to decide on whether picketers could use their street in any way that the owners saw fit.1

Similarly, such employer devices as the blacklist — a form of boycott — would be legal in the free society. Before the Norris-LaGuardia Act of 1931, it was legal for employers to fire union organizers among their employees, and to circulate blacklists of such persons to other employers. Also legal would be the "yellow-dog contract," another device before the Norris-LaGuardia Act. In such a contract, the employee and the employer agree that, should the former join a union, the employer can fire him forthwith.