The Enduring Power of Bureaucracy 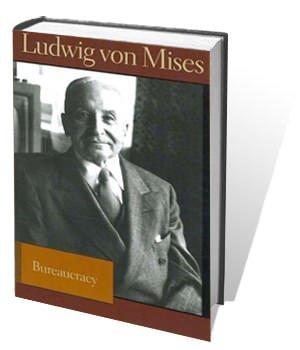 Although written in 1944, this book not only stands the test of time, it renders time irrelevant. It is, in fact, alarmingly evocative of contemporary experience.

Powerful political parties and pressure groups are fervently asking for public control of all economic activities, for thorough government planning, and for the nationalization of business. They aim at full government control of education and at the socialization of the medical profession. There is no sphere of human activity that they would not be prepared to subordinate to regimentation by the authorities. In their eyes, state control is the panacea for all ills. …

The champions of totalitarianism call themselves "progressives." … Because of these "progressive" policies, new offices and government agencies thrive like mushrooms. The bureaucrats multiply and are anxious to restrict, step by step, the individual citizen's freedom to act.

The bureaucrats, much as they may be despised, are not the root of the evil, but only its symptom. "Congress made the laws and appropriated the money." The progressives, Mises reminds us, were voted into office.

He describes how Congress surrendered the legislative function to agencies and commissions and appropriated huge sums for them to spend, thus surrendering budgetary as well as legislative control. Of course, in 1944, Mises was describing the New Deal and how it breached constitutional limits. Any resemblance to contemporary events resides in readers' ability to draw their own conclusions.

The thesis of the book is that there are only two ways society can be organized: on the basis of private ownership, capitalism, and freedom; or on the basis of government control, socialism, and eventual totalitarianism. He compares both systems of social organization, and investigates the nature of bureaucracies to reveal why socialism results "not only in impoverishment but also in the disintegration of social cooperation — in chaos."

He explains that bureaucracies, although suited to the orderly conduct of government functions, are ruinous when applied to the economic sector. Bureaucracies operate on the basis of rules and regulations issued by hierarchies located far from the realities they seek to supervise. Because resources don't belong to them, and there is no reward for efficiency, bureaucratic managers lack incentives to be prudent or to expeditiously serve the public. Progress and innovations are discouraged because they threaten the status quo, and because there is no provision for them in the rules and regulations. By definition, bureaucracies are unable to conduct economic affairs in a rational manner.

Socialism, that is, full government control of all economic activities, is impracticable because a socialist community would lack the indispensable intellectual instrument of economic planning and designing: economic calculation. The very idea of central planning by the state is self-contradictory. A socialist central board of production management will be helpless in the face of the problems to be solved. It will never know whether the projects considered are advantageous or whether their performance would not bring about a waste of the means available.

"America is faced with a phenomenon that the framers of the Constitution did not foresee and could not foresee: the voluntary abandonment of congressional rights."
Ludwig von Mises

Mises explains why government-controlled enterprises in a mostly free-market economy suffer the same deficiencies: profit does not guide the operation, government resources are limitless, and consumer preferences are immaterial. Other values — not necessarily shared by the public — dominate.

The New York Times provides a current example: an electric hybrid car described by one reviewer as an overpriced underperformer.

Quantifying just how much taxpayer money will have been wasted on the hastily developed Volt is no easy feat. Start with the $50 billion bailout (without which none of this would have been necessary), add $240 million in Energy Department grants doled out to GM last summer, $150 million in federal money to the Volt's Korean battery supplier, up to $1.5 billion in tax breaks for purchasers and other consumer incentives, and some significant portion of the $14 billion loan GM got in 2008 for "retooling" its plants, and you've got some idea of how much taxpayer cash is built into every Volt.

Under a market system, by contrast, the people are sovereign in their capacities both as consumers and as producers, because they are subject to the law of the market. Private business is constrained by the need to produce what fellow citizens will buy at a price they will pay. Being unprofitable means that a business has failed to satisfy consumer demand, and failure is not subsidized.

We do not assert that the market prices are to be considered as expressive of any perennial and absolute value. … Judgments of value are the outcome of human arbitrariness. They reflect all the shortcomings and weaknesses of their authors. However, the only alternative to the determination of market prices by the choices of all consumers is the determination of values by the judgment of some small groups of men, no less liable to error and frustration than the majority.

One by one, Mises discusses and dispatches the pillars of progressive dogma: government spending can create jobs for the unemployed; the service motive is better than the profit motive; government choices are superior to individual choices; the Constitution is an unnecessary impediment to the welfare state.

Mises draws on then-recent events to chart the development of government omnipotence in Europe. He points out that prior to the collapse of democratic constitutions, the state was the source of income for large segments of the electorate and concludes, "Representative democracy cannot subsist if a great part of the voters are on the government payroll."

He also remarks that totalitarianism could have been "nipped in the bud" if its proponents had not succeeded in indoctrinating the youth. He observes that European totalitarianism was the result of Marxist and other proponents of government control dominating education. "The universities paved the way for the dictators," he writes and later adds, "The most enthusiastic supporters of Marxism, Nazism, and Fascism were the intellectuals, not the boors."

In the second-to-last chapter, Mises concludes, "Mankind is manifestly moving toward totalitarianism." He frames the struggle between freedom and an ever-encroaching government as a war of ideas. "Public opinion will determine victory and defeat," he says. And he urges every lover of liberty to join the battle.

He points out that earlier struggles for freedom were easier to understand because they were between the tyrants and the people: "Who should rule? … The despot or the aristocracy or the people?"

Today, the issue is obfuscated by proponents of state control who propagandize that the war is between the good, embodied in the "great god state," and the bad, the "rugged individualism" of selfish men.

The publisher's note to the 1983 edition of Bureaucracy states, "Truth lives whether or not we like it and welcome it." So it is that this little book has the power to illuminate both past and present. The conflict between individualism and collectivism described by Mises over 60 years ago, not only still rages, it may be in its final and conclusive engagement.

Marcia Sielaff is a retired editorial writer. She writes for WhatWouldTheFoundersThink.com.