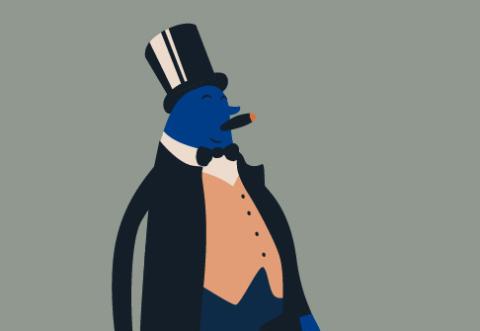 Tags The EntrepreneurMedia and Culture

Edgar the Exploiter is a wonderful animated short by Tomasz Kaye that defends voluntary employer-employee relations and demonstrates the harm that policies like minimum-wage laws inflict on the very people they are supposed to help.

Edgar is a capitalist who hires Simon as an unskilled laborer, until a minimum-wage law impels Edgar to lay Simon off.

Give it a view. It is beautifully done.

How the free market benefits workers, and how government intervention hurts them, is an important lesson indeed.

But to get the full picture of the virtues of the free market and the evils of interventionism, it is essential to bring the consumer into the picture.

Edgar may be the "boss" of Simon in Simon's role as a worker. But Simon as a consumer is, along with the other consumers of the market, the boss of Edgar in Edgar's role as an entrepreneur.

The orders given by businessmen in the conduct of their affairs can be heard and seen. Nobody can fail to become aware of them. Even messenger boys know that the boss runs things around the shop. But it requires a little more brains to notice the entrepreneur's dependence on the market. The orders given by the consumers are not tangible, they cannot be perceived by the senses.[1]

To perceive in market activity the orders given by the "sovereign consumers," one must employ economic theory.

Say Edgar owns a business that manufactures and sells tablet computers called "ePads." As an entrepreneur, he will try to acquire profits by selling his product for more money than what he paid to have it made.[2] So, for Edgar, his anticipation of consumer demand for the ePad is of prime importance, because it indicates how much revenue he may get.

In order to ensure that he gets profits, Edgar will want to spend on each factor of production less than its expected contribution toward garnering revenue from the consumers.

For example, as the video has it, every hour of Simon's labor as a floor sweeper is expected to result in $4 of extra revenue for Edgar. Perhaps without someone keeping the factory floor clear and clean eight hours a day for a year, the whole process would slow down to the extent that Edgar would sell fewer ePads, costing him over $8,000 over the course of a year.

Four dollars is, in Murray Rothbard's terminology, the expected marginal value product (MVP) of an hour of Simon's work in this particular production process. [3]

This expected MVP is Edgar's estimate of what the consumers will pay for Simon's contribution toward making ePads. And it sets an upper limit on what Edgar will be willing to pay Simon. Were Edgar to pay Simon more than $4/hour, he would expect to lose money.

Is there a lower limit? And if so, what sets it? In the video, Edgar pays Simon $3/hour. Why doesn't Edgar save money by paying Simon $2/hours or less?

Also, as the video points out, Edgar is only one of many entrepreneurs eager to hire labor for their production processes.

For example, let us say Carlos the Competitor makes "gTabs," another kind of tablet computer. gTabs don't sell as well as ePads, so Simon's expected MVP in Carlos' production process is lower: only $2.75/hour. Even so, to keep Simon from getting bid away by Carlos, Edgar cannot cut Simon's pay too much.

In fact, Edgar may have to give Simon a raise if a competing employer comes along who has a production process in which Simon's MVP is higher than $3/hour (even if it is still less than $4/hour). He may need to pay Simon $3.50/hour in order to keep Simon from being bid away by someone willing to pay $3.75/hour.

Furthermore, if someone comes along with a production process in which Simon's expected MVP is higher than $4, Simon would indeed be bid away, and there would be nothing Edgar could do about it.

In this way, labor will tend to be allocated to the production process in which it has the highest expected MVP. And a worker's wage will tend toward equaling that MVP. In fact, this is true of virtually all factors of production and their hire prices.[4]

And it is in anticipation of those payments that yet other entrepreneurs (for example, businessmen who sell microchips to Edgar) formulate the expected MVP of third-order goods (for example, the labor of microchip engineers).

Thus, in a market economy, consumer demand ultimately holds sway over every stage of production. When a factor is expected to have a high MVP in a given line of production, that means the entrepreneur expects the consumers to urgently want the product at the end of that line. And the opposite is true of an expected low MVP.

When an entrepreneur bids a factor away from a low-MVP role in one production process to move it into a higher-MVP role in another production process, he is attempting to win profits by pleasing consumers better than they were before. This is because the higher MVP of factors, as Rothbard says,

is due solely to their being more highly demanded by the consumers, i.e., being better able to satisfy the desires of the consumers. That is the meaning of a greater discounted marginal value product.[5]

Of course the entrepreneur may fail in the attempt. For example, Edgar may be entirely wrong in his anticipation of Simon's MVP. The demand for ePads may be such that Simon may only contribute to Edgar's bottom line less than he is getting paid. This, plus other similar errors, may result in Edgar making losses.

Consumers punish inept entrepreneurs with losses through their buying and abstention from buying. Losses are a sign that the entrepreneur has arranged factors in a way contrary to the wants of the consumers. For example, maybe consumers like gTabs better, and would have preferred Simon to have worked toward their production, even if it was at a higher wage.

By making an entrepreneur poorer, and thus less able to bid for factors, losses reduce that entrepreneur's role at the helm of production. So much the better for the consumers he served poorly!

But then Edgar may be correct, and Simon may contribute to Edgar's bottom line more than he was paid. This, plus other similar good calls, may result in Edgar making profits.

Consumers reward capable entrepreneurs with profits through their buying and abstention from buying. Profits are a sign that the entrepreneur has arranged factors in a way pursuant to the wants of consumers.

By making an entrepreneur richer, and thus more able to bid for factors, profits increase that entrepreneur's role at the helm of production. So much the better for the consumers he served well!

The characteristic feature of the market economy is the ceaseless striving of entrepreneurs to, in the course of seeking profit and avoiding losses, arrange factors of production to better satisfy consumers.

And, because the greatest profits are to be found in servicing the masses, "modern capitalism is essentially mass production for the needs of the masses."[6]

This casts another shaft of light on the situation in Edgar the Exploiter.

It is indeed a personal tragedy for Simon to have lost his job due to the minimum-wage law. But he is not the only one made worse off.

Consumers are worse off too. For example, it might have been the case that Edgar cannot make ePads at all without low-wage labor.

The video considers the prospects of Edgar buying machines to replace Simon, or relocating to another country without minimum-wage laws. Even in those cases, the consumers' interests are likely to be harmed.

Had Edgar thought that consumers would have rewarded him extra profits for replacing Simon with robots or foreign labor, he would have done so even without the minimum-wage law. Therefore, in the judgment of the guy with skin in the game, keeping Simon was the best way available to satisfy consumers. And now that is no longer an option.

For example, due to hurdles presented by using robots or foreign labor, Edgar may only be able to churn out fewer, or lower-quality, ePads.

Now there is one person you may not expect to care a whit about all that. In the video, "Bob" did not lose his job. In fact, he got a raise due to the minimum-wage law. Why should he care? Maybe he doesn't even like ePads.

But he is a consumer of some goods. And the minimum-wage law may very well result in those being produced in lower quantities and quality as well. To the extent that the minimum-wage law effects how the goods he buys are produced at all, it partially nullifies the orders he transmitted through the price structure as a "sovereign consumer."

To the extent that such producer privileges become the norm, and the sovereign consumer is dethroned across the board, it is certain that

everybody loses in his capacity as consumer as much as he gains in his capacity as a producer. Moreover, all are injured because the supply of products drops if the most efficient men are prevented from employing their skill in that field in which they could render the best services to the consumers.

And on top of all this, Bob may find himself worse off as a worker as well. Even with his nominal raise, he may ultimately find himself with lower real wages than he otherwise would have had. This is because any state-induced reduction of profit (like the reduction caused by Edgar losing Simon) means less additional savings that the entrepreneur-capitalist can invest in capital goods. And fewer capital goods means a lower marginal productivity of labor, which in turn means lower real wages.

Every state intervention into the market is an abrogation of consumers' sovereignty. It impairs the satisfaction of consumers by hampering the efforts of entrepreneurs to adjust the intricate structure of production so as to better serve them. And because, with regard to economic provision, we are all consumers first and foremost and producers only subordinately, reduced consumer satisfaction means reduced public welfare.

Abolish the minimum wage, not only for the sake of Simon the worker, but for Simon the consumer (and the rest of us too).

[2] Due allowance being made for time preference.

[3] Future revenue is always discounted according to time preference. So, strictly speaking, we are dealing here with the discounted marginal value product (DMVP).

[4] Strictly speaking, this is only true of "isolable" factors. But the vast majority of factors are isolable. See Murray N. Rothbard; Man, Economy, and State, chapter 7.