The Economics of Groundhog Day 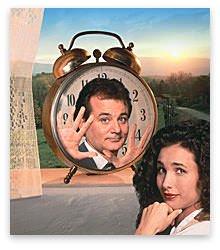 The shortcomings of mainstream economics are subtle, but can be understood with clear examples. Such examples need not come from observed history. While art may imitate life, there is one instance where life cannot imitate art. The movie Groundhog Day (1993) illustrates the importance of the Mises-Hayek paradigm as an alternative to equilibrium economics by illustrating the unreal nature of equilibrium theorizing.

After committing numerous errors he goes to sleep. When he awakens, time has turned back twenty-four hours. He is about to relive the same day. Since no one else remembers having lived this day before, Connors can relive it knowing more about what will happen than he did the first time. After reliving this same day hundreds of times, he learns how to live it perfectly, not just for him, but for others too.

How does this movie relate to economics? The first time through, the day is highly imperfect because Connors lacks knowledge concerning what will happen. He lacks knowledge of how to take best advantage of what will happen during the day. By his final iteration of Groundhog Day, he has acquired virtually perfect information on how to act during this particular day, given how everyone else will react.

In economic terms the final reliving of the day constitutes what economists refer to as a perfectly competitive equilibrium based on perfect information. With full knowledge of how to realize every possible gain during this day, Connors is able take advantage of every opportunity for gain. The difference between his first time through the day and his final reliving are dramatic. While this is of course only a movie, it does serve to illustrate the wide gulf between the economists' notion of perfectly competitive equilibrium and reality.

The ability of this fictional character to relive a single day points to vital issues in economics. Perfectly competitive equilibrium requires perfect information. Ignorance leads to errors that put the ideal state of equilibrium out of reach. Ignorance and error exist due to perpetual change. In a world where everything stays the same — except our knowledge of previous days — we can approach perfection.

Phil Connors is able to live a perfect day not only because the events of the physical world are repeating perfectly (i.e. the weather), but more so because people are living it as if it was the first time. Economists refer to "Nash Equilibrium" as a situation where everyone makes plans that are optimal given the plans of others. In such a situation the plans of everyone mesh perfectly. This situation requires everyone to know about the plans of others in advance. This is the essential idea behind equilibrium theorizing in economics.

The problem with equilibrium theorizing is that it assumes that the fundamental conditions of the world do not change. That is, it assumes that we simply play the same game over and over again without any fundamental structural change. In the hypothetical world of Phil Connors in Groundhog Day all of the parameters of the "game" he is playing are reset back to their original position every night while he sleeps. In the real world there are no constants. FA Hayek recognized the importance of this fact in 1937:

"For any one individual, constancy of the data does in no way mean constancy of all the facts independent of himself, since only the tastes and not the actions of individuals can be assumed to be constant. As all those other people will change their decisions as they gain experience about the external facts and about other peoples' actions, there is no reason why these processes of successive changes should ever come to an end" (Hayek 1937 [1948] p49).

Hayek reasoned that equilibrium was an unreal state, and that the actual economy that we need to explain is one characterized by perpetual change. This fact changes the way we view all economic activity. As Ludwig von Mises put it

"Once everything is in a state of flux, everything which happens is an innovation. Even when the old is repeated, it is an innovation because, under new conditions, it will have different effects. It is an innovation in its consequences … In any economic system which is in a process of change all economic activity is based on an uncertain future. It is therefore bound up in risk. It is essentially speculation." (Mises 1922 p180-181).

While it might seem extreme to characterize all human action as speculative this is actually an eminently reasonable position. Some people might recall examples of repeated behavior on their own part that generated the same results. Yet such impressions are more apparent than real. Much of the change that happens is subtle, very small, or affects persons other than ourselves whom we do not see. Yet change does occur even when it goes unnoticed. Furthermore, many changes are in fact large, whether noticed or not. The pervasive and ceaseless nature of change has serious consequences.

The lessons we learn each day are at best only partially valid for the next day. Consequently we can at best hope for only a gradual improvement in our lives as we keep pace with but never overtake changes in our surroundings. Our reality is to live our lives as Phil Connors did the first time he lived through Groundhog Day, not the last time. We are all speculators and our every action is innovative.

The idea that we cannot achieve the ideal state of perfectly competitive market equilibrium might seem pessimistic. Some economists insist upon holding the capitalist system to a standard of competitive equilibrium. Failure to meet this standard constitutes a "market failure" that warrants government intervention.

After all, if markets are so very far from perfection, then perhaps government intervention could make things better. While it is important to realize that markets fall far short of perfection, it is more important to realize that markets do enable us all to realize a remarkable degree of plan coordination and efficiency. Capitalism has increased living standards to levels that primitive man never imagined. The capitalist system delivered tremendous progress through its ability to bring about partial plan coordination among the world's population.

On any given day market prices can, in the absence of price controls, adjust to a level where supply equals demand. This does not represent a perfect state of affairs as actual market supply is always determined by past production plans based on incomplete and partially incorrect information. [1].

However market prices do serve as guideposts in the imperfect coordination of production in a complex world (Lavoie 1985 p54). Prices arise out of the pursuit of profit by entrepreneurs and the pursuit of greater satisfaction by consumers. These participants to trade use money as a universal and homogeneous measuring rod to realize mutually beneficial exchanges. Without freely circulating money and the pursuit of profit by private owners of the means of production, society would collapse into complete chaos.

The problem with equilibrium theorizing is not its abstract nature. All theory is abstract. The problem with equilibrium theorizing is that it is unreal, and it diverts attention from important issues. Mises and Hayek recognized that government fails to match the imperfect results of capitalism, as have other economists. Nobel prize winners Ronald Coase and James Buchanan also emphasized the need to make meaningful comparisons between private and public institutions. Unfortunately, many economists still hold markets to the unrealistic standard of perfectly competitive equilibrium.

Free-market capitalism allows for a degree of coordination that no other system can match. Those who hold capitalism to a standard of perfection ignore the fact that activist governments have failed to attain anything better, and have often made matters worse.

Groundhog Day is an entertaining movie, and it illustrates an important concept: one that we can never observe in real life. Because perfect competition is completely unreal we need other concepts that enable us to understand how the world really works. Fortunately, such concepts already exist in the writings of Ludwig von Mises and FA Hayek.

Buchanan, JM: What Should Economists do?

Coase, RH: The Firm, the Market, and the Law University of Chicago Press

[1]This is what Mises referred to as a plain state of rest.