The Economics Behind the Fall of the Berlin Wall 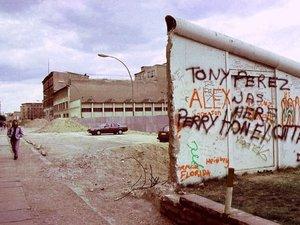 Friday marks the thirtieth anniversary of the fall of the Berlin Wall. Like most historical events that are commemorated as if they took place on a single day, the fall of the Berlin Wall on November 9, 1989, was just one of many interrelated events that led to the end of the system of Soviet client states in Eastern Europe, and the end of the Soviet Union itself, in December of 1991.

With the fall of the Berlin Wall, East Germans, who had lived under severe restrictions on travel and emigration, were able to freely travel to West Berlin, which continued a chain of events already begun earlier that year in which many anti-Soviet dissidents throughout Eastern Europe became emboldened and met with unprecedented success. Meanwhile, East Germans flooded into neighboring countries by the thousands, seeking refuge from Soviet-sponsored oppression in Austria and West Germany.

Throughout the mid-twentieth century, Eastern Europe was home to numerous anti-Soviet revolts and acts of civil disobedience. In Hungary in 1956, Prague in 1968, and especially in Poland throughout the 1970s and 1980s, resistance flared up, but was reliably crushed with Soviet-sponsored martial law and outright military intervention.

But in the summer of 1989, the Poles held an election that essentially overthrew the Soviet-approved regime in Poland. This, time, however, instead of sending tanks to crush the Polish agitators, the USSR did nothing.

By November of that year, dissidents had become emboldened by Soviet inaction. Hungary and Czechoslovakia haphazardly opened their borders, allowing East Germans to stream into Austria and on to West Germany. East Berliners began to demand free passage to the West. The “fall” of the wall, soon followed.

Americans today, and especially American conservatives, like to claim that the end of the Soviet bloc and the Soviet Union was America’s doing; that the Soviet oligarchs feared American military might, and simply decided to give up and vote themselves out of existence, as they did two years later. This tale makes for nice domestic propaganda in America, but the fact that regimes virtually never just “give up” without firing a shot when faced with a threatening foreign power makes it rather unlikely.

We are far more likely to find an answer if we ask ourselves not why the American state was so strong in the 1980s, but why the Soviet state was so weak. If the Soviets were more than capable of maintaining “order” in Eastern Europe during the 50s, 60s, and 70s, why was it unable or unwilling to do the same in the 1980s?

An inquiry along these lines quickly leads us to find that by the 1980s, the soviet economy, and most of the economies of Eastern Europe were economic basket cases. Housing was in disrepair. Vehicles and appliances were incredibly old-fashioned and unreliable. The standard of living was a fraction of what it was in the “West.” Basic items like soap and women’s pantyhose were often luxuries.

In other words, the centrally-planned economies of the Soviet bloc produced little actual wealth, and as the regimes siphoned off more and more of what little wealth was being produced, the people, as well as the regimes, became poorer and poorer.

This economic weakness meant not only that the legitimacy of the regime was imperiled, but that the Soviets no longer enjoyed a military “surplus” with which they could simply roll into every rebellious neighborhood and re-establish order.

In other words, the USSR was too poor to pay the political bills.

Mises and the Calculation Problem

None of this would have surprised Ludwig von Mises. Decades before, Mises had shown that a socialist economy (by which he meant a centrally planned economy) could not possibly know what to produce, when to produce it, or for whom to produce. In explaining this, Mises proved that the Soviet Union, regardless of any victories it might have in remolding human nature, was economically impossible. Rothbard explains:

Before Ludwig von Mises raised the calculation problem in his celebrated article in 1920, everyone, socialists and non-socialists alike, had long realized that socialism suffered from an incentive problem. If, for example, everyone under socialism were to receive an equal income, or, in another variant, everyone was supposed to produce “according to his ability” but receive “according to his needs,” then, to sum it up in the famous question: Who, under socialism, will take out the garbage? That is, what will be the incentive to do the grubby jobs, and, furthermore, to do them well? ...

But the uniqueness and the crucial importance of Mises’s challenge to socialism is that it was totally unrelated to the well-known incentive problem. Mises in effect said: All right, suppose that the socialists have been able to create a mighty army of citizens all eager to do the bidding of their masters, the socialist planners. What exactly would those planners tell this army to do? How would they know what products to order their eager slaves to produce, at what stage of production, how much of the product at each stage, what techniques or raw materials to use in that production and how much of each, and where specifically to locate all this production? How would they know their costs, or what process of production is or is not efficient?

Mises demonstrated that, in any economy more complex than the Crusoe or primitive family level, the socialist planning board would simply not know what to do, or how to answer any of these vital questions. Developing the momentous concept of calculation, Mises pointed out that the planning board could not answer these questions because socialism would lack the indispensable tool that private entrepreneurs use to appraise and calculate: the existence of a market in the means of production, a market that brings about money prices based on genuine profit-seeking exchanges by private owners of these means of production. Since the very essence of socialism is collective ownership of the means of production, the planning board would not be able to plan, or to make any sort of rational economic decisions. Its decisions would necessarily be completely arbitrary and chaotic, and therefore the existence of a socialist planned economy is literally “impossible” (to use a term long ridiculed by Mises’s critics).

The Soviet central planners never had an answer to this critique. Indeed, their “answer” only came in 1991 when the USSR finally shut itself down. And even up to the end, American Keynesians never figured it out either, and Paul Samuelson still claiming in 1989 that a “socialist command economy can function and even thrive.”

Why Did it Take So Long?

The answer can be found in the fact that even in a centrally planned state, capital does not simply vanish overnight. The soviet planners were not starting with nothing. They had the accumulated capital of centuries of savings and investment by Russians, Ukrainians, Germans, Poles, and others under their control.

True, it was not possible for them to correctly plan or determine non-arbitrarily what goods should be produced. But they nevertheless had large amounts of capital at their disposal, and even if the centrally planned state produced zero wealth (which was not true since even the Soviet state produced some things people wanted), the state still had plenty of wealth to redistribute until it was all gone.

This is all the more true for regimes that are only partly centrally planned, as in the case of Venezuela, on which Nicolás Cachanosky observed:

[I]f one of the wealthiest and developed countries in the world were to adopt Cuban or North Korean institutions overnight ... [t]he wealth and capital does not vanish in 24 hours. The country would shift from capital accumulation to capital consumption and it might take years or even decades to drain the coffers of previously accumulated wealth. In the meantime, the government has the resources to ... enjoy the wealth, highways, electrical infrastructure, and communication networks that were the result of the more free-market institutional realities of the past.

Eventually, though, the “reserve fund,” as Mises called it, is used up:

An essential point in the social philosophy of interventionism is the existence of an inexhaustible fund which can be squeezed forever. The whole system of interventionism collapses when this fountain is drained off: The Santa Claus principle liquidates itself.

In addition to this, the Soviets made money for the regime by selling oil (and other goods) in international markets, and high oil prices in the 1970s propped up the regime so well, that had it not been for Soviet oil sales, it’s quite possible the regime would have collapsed a decade earlier.

As the mainstream news outlets cover the anniversary of the Berlin Wall’s fall this year, they will surely spend much time discussing the role of various American politicians, and military programs, and international relations. It is quite possible that all of these things had an effect on the regimes of Eastern Europe that were non-trivial. Nonetheless, such analysis ignores the huge elephant in the room which is the inevitable failure of regimes that are built on central planning and wealth re-distribution. Without markets and prices, there can be no planning, and without planning, no wealth creation, and ultimately, no political durability. The rebels and demonstrators of Eastern Europe deserve immense credit for courageously standing up to the state. But in the end, those who were successful were helped immensely by good timing and bad economics.

[Editor's Note: This article was first published in 2014 to mark the 25th anniversary of the fall of the Berlin Wall. It has been slightly updated for the 30th anniversary.]