GET NEWS AND ARTICLES IN YOUR INBOXPrint
A
A
Home | Mises Library | Does Neuroscience Support Austrian Theory? 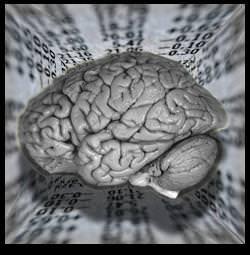 Anyone who follows politics or financial markets has to wonder at times, "What are people thinking? How did they come to make those decisions?"

It's hard to imagine that John Muth and Robert Lucas came up with what's known as the "rational expectations theory" wherein, as explained in Wikipedia, "it is assumed that outcomes that are being forecast do not differ systematically from the market equilibrium results. As a result, rational expectations do not differ systematically or predictably from equilibrium results. That is, it assumes that people do not make systematic errors when predicting the future, and deviations from perfect foresight are only random."

Muth and Lucas should watch the Jerry Springer show, or, better yet, Jim Cramer's "Mad Money" daily program about investing. And while financial markets have been a series of speculative bubbles as the Federal Reserve creates money ad infinitum, rational-expectations economists Robert Flood and Robert Hodrick have the audacity to conclude, "The current empirical tests for bubbles do not successfully establish the case that bubbles exist in asset prices."1

Dr. Read Montague would beg to differ. In his book Why Choose This Book? Dr. Montague takes us inside the brain to understand how we make decisions. Montague is no economist. Neuroscience is his beat. Why Choose uses computational neuroscience, an extension of evolutionary biology that studies the actual information processing supported by our brains, to try to figure just why humans act the way they act.

It doesn't take long for Montague to touch on the study of an investment game that he set up with two economists, Kevin McCabe and Colin Camerer, based upon on a similar experiment designed by mathematician Terry Lohrenz. The subjects of the experiment were given $100 to invest, making their decisions against 20 different markets. Montague and the two economists used "historical market traces and measured brain and behavioral responses to these," writes Montague.2

The researchers were especially interested in how their subjects would respond to markets featuring bubbles and crashes using a model of market bubbles that Nobel Laureate Vernon Smith devised. The subjects' brains were scanned while they created and reacted to market bubbles with their investments. Fifty-two subjects played the investment game in the scanners but had no idea they were playing in actual historical markets.

Two of the markets used in the simulation were particularly brutal to the fifty-two participants; the 1987 stock market crash and the 1929 crash. None of the subjects earned money in the 1929 crash simulation and many lost more than half their portfolio. "This market," Montague explains, "out of all twenty used, lulled subjects' decision mechanisms into a kind of stupor and then — bang. Goodbye, money."3

The variable that most drove behavior in the investment game in all markets was — regret. Regret was a big factor when subjects changed their investments and also "showed up as an extremely strong neural signal in a reward-decision-making region of the brain, the ventral putamen, the same site where reward-prediction error signals appear." Thus, the brain treats counterfactual experience the same as it does real experience.4

Regret, in this case, is the difference between the value of what is and the value of what could have been. Montague offers what he calls a pseudoequation: "Terry Malloy's Regret equals (value of being a contender minus value of being a bum). Why this is important is something called dopamine, a chemical in the brain that helps humans decide how to take actions that will result in rewards at the right time."6

People don't get a dopamine kick when they get what they expect, only when they make an unexpected windfall. Thus, as Jason Zweig writes in Your Money and Your Brain, drug addicts crave ever-larger fixes to achieve the same satisfaction and "why investors have such a hankering for fast-rising stocks with 'positive momentum' or 'accelerating earnings growth.'" Also, dopamine dries up if the reward you expected fails to materialize.7

Dr. Montague doesn't mention the Austrian Business Cycle Theory in Why Choose, but if he did, he might start by saying the central bank provides excess liquidity, which lowers interest rates and some of the excess liquidity is invested in stocks. As the prices of these stocks rise, investors' dopamine levels increase from the expectation of gain, riskier stocks are then bid up in price by investors because more risk must be undertaken to achieve the same dopamine rush and a market becomes a bubble. Ultimately the fundamentals of the investments do not support the prices, market prices cool and dopamine levels dry up, as expected gains don't materialize. A crash ensues with investor regret.

A drop in interest rates engineered by an expansion in liquidity by a central bank, "falsifies the businessman's calculation," Ludwig von Mises explained in Human Action. "The result of such calculations is therefore misleading. They make some projects appear profitable and realizable which a correct calculation, based on an interest rate not manipulated by credit expansion, would have shown as unrealizable. Entrepreneurs embark upon the execution of such projects. A boom begins."8

Computational neuroscientists would add that not only do the projects appear profitable on paper but also that dopamine is released into the brains of entrepreneurs as they anticipate future profits.

The more optimistic they were under the illusory prosperity of the boom, the greater is their despair and their feeling of frustration. The individual is always ready to ascribe his good luck to his own efficiency and to take it as a well-deserved reward for his talent, application and probity. But reverses of fortune he always charges to other people, and most of all to the absurdity of social and political institutions. He does not blame the authorities for having fostered the boom. He reviles them for the inevitable collapse.9

The rationalization that Mises refers to is discussed by social psychologist Daniel Gilbert in his book Stumbling on Happiness. According to the Harvard professor, our frontal lobes make us look at ourselves through rose-colored glasses. "To learn from our experience we must remember it, and for a variety of reasons, memory is a faithless friend," Gilbert writes.10

Psychologists also call this "hindsight bias." "People distort and misremember what they formerly believed," explains psychologist Daniel Kahneman. "Our sense of how uncertain the world really is never fully develops, because after something happens, we greatly increase our judgments of how likely it was to happen."11 This bias keeps us from feeling like idiots as we look back, but "can make you act like an idiot as you go forward," writes Jason Zweig.12

The work of neuroscientists Montague and Lohrenz indicates that regret, "the counterfactual learning signal, was a powerful determinate in the betting decisions that created [subject] losses while playing against the 1929 market."

"In fact," Montague writes, "as cultural and financial historians run that period through various analyses, regret about a host of decisions, individual and institutional, permeates every one."13

So while the rational-expectations school attempts to explain away market bubbles and the ensuing crashes, the Austrian School, which formerly stood alone in providing a compelling explanation for these market phenomena, now has help from the neuroscience community.