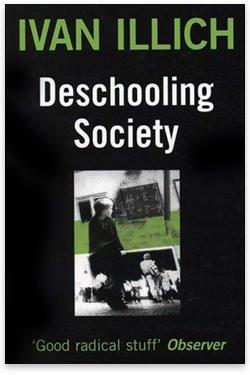 02/03/2010Leonard P. Liggio
One had to be struck by the vehemence with which Ivan Illich's Deschooling Society has been attacked.

The review in the New York Times Book Review (July 11, 1971) by one of the educational establishment is an example.1 Why this violent reaction, one wondered, reading through the review? And then, the answer came. Illich's advocacy of the free market in education is the bone in the throat that is choking the public educators.

If the consumer approach has misled and cheated people in supermarkets (and particularly poor and uneducated people), why would any of the free market mechanisms so popular in radical circles work better in education!

One cannot allow to pass unnoted the reviewer's remark that "free market mechanisms" are "so popular in radical circles."

The historic conjunction of free market and radical, when free-market concepts were in their prime and really challenged the monopoly system, has been restored. After being long lost in the baggage of standpattism, the free market has been liberated as the result of the hard work of recent libertarian economists, philosophers, and historians, and has moved to the forefront as the only solution to the chaos of the monopoly system.

Illich begins by saying that

I had never questioned the value of extending obligatory schooling to all people. Together we have come to realize that for most men the right to learn is curtailed by the obligation to attend school.

He feels that the public school system is the paradigm of all the "bureaucratic agencies of the corporate state," and that his basic approach to demonopolizing education (ending its compulsory nature in all its aspects) is the answer for the rest of the corporate state's bureaucracy. Illich's solution is to definance these institutions — remove their tax support.

Justice William 0. Douglas observed that "the only way to establish an institution is to finance it." The corollary is also true.

Illich wants to eliminate the tax support for the schools as well as health, welfare, and, one supposes, American business in general. Illich contrasts right-wing (monopoly) institutions with left-wing (free-market) institutions, showing the advantages of the un-tax-supported, competitive approach to serving consumer wants.

Right-wing institutions, as we can see clearly in the case of schools, both invite compulsively repetitive use and frustrate alternative ways of achieving similar results. Toward, but not at, the left on the institutional spectrum, we can locate enterprises which compete with others in their own field, but have not begun notably to engage in advertising. Here we find hand laundries, small bakeries, hairdressers, and — to speak of professionals — some lawyers and music teachers. Characteristically left of center, then, are self-employed persons who have institutionalized their services but not their publicity. They acquire clients through their personal touch and the comparative quality of their services.

Illich places public education near the extreme right of the spectrum: "they belong near the extreme of the institutional spectrum occupied by total asylums." Illich presents an interesting contrast between science in a free market and science in the monopoly system:

An even more valuable body of scientific objects and data may be withheld from general access — and even from qualified scientists — under the guise of national security. Until recently science was the one forum which functioned like an anarchist's dream. Each man capable of doing research had more or less the same opportunity of access to its tools and to a hearing by the community of peers. Now bureaucratization and organization have placed much of science beyond public reach. Indeed, what used to be an international network of scientific information has been splintered into an arena of competing teams.

Just as the role of the state has transformed science and deformed it, the role of the state has been to deform education and learning. Compulsion and public tax support are the common destructive elements. The right-wing or tax-supported approach — the current matter of government aid to Lockheed, which developed from government contracts, is instructive — with its twin of compulsion must be confronted.

School has become the world religion of a modernized proletariat, and makes futile promises of salvation to the poor of the technological age. The nation state has adopted it, drafting all citizens into a graded curriculum leading to sequential diplomas not unlike the initiation rituals and hieratic promotions of former times. The modern state has assumed the duty of enforcing the judgment of its educators through well-meant truant officers and job requirements, much as did the Spanish kings who enforced the judgments of their theologians through the conquistadors and the Inquisition. Two centuries ago the United States led the world in a movement to disestablish the monopoly of a single church. Now we need the constitutional disestablishment of the monopoly of the school, and thereby of a system which legally combines prejudice with discrimination. The first article of a bill of rights for a modern, humanist society would correspond to the First Amendment to the US Constitution: "The state shall make no law with respect to the establishment of education."

Until that happy day when education is disestablished, Illich is searching for methods of moving strongly away from the public education system. He has been influenced by the conversations and papers of members of the Chicago school of economists who advocate a program of tuition grants.

Taxpayers are not yet accustomed to permitting three billion dollars to vanish from HEW as if it were the Pentagon. The present administration may believe that it can afford the wrath of educators. Middle-class Americans have nothing to lose if the program is cut. Poor parents think they do, but, even more, they are demanding control of the funds meant for their children. A logical way of cutting the budget and, one hopes, of increasing benefits is a system of tuition grants such as that proposed by Milton Friedman and others. Funds would be channeled to the beneficiary, enabling him to buy his share of the schooling of his choice.

The approach of the Chicago school of economists, in this as in so much else, requires two comments: first, they more than any other group address themselves to real issues and not imaginary constructs; and second, as they are not libertarians, their solutions fall far short of the answers that the free market offers. A tax-credit approach, for instance, would be preferable.

But, however much they may be holders of the truth, libertarians do not bring that truth to those such as Illich who are seeking it. While Chicagoans are here, there, and everywhere, giving or attending seminars, libertarians retreat.

How many libertarian scholars will be contributing to the seminar on "Alternatives in Education" next year at Illich's Center for International Documentation in Cuernavaca, Mexico?

Leonard Liggio was a classical liberal author, research professor of law at George Mason University, and executive vice president of the Atlas Network in Fairfax, Virginia, US.