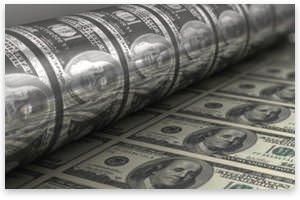 In preparing for class this past spring, I encountered a video on the Fed's website that obfuscates the fact that the Fed prints money. The six-minute video (posted in January 2011) features economist Steve Meyer, senior advisor to the Federal Reserve Board of Governors.

In discussing the Fed's most recent expansion, QE2, Meyer states,

You may wonder how the Fed pays for the bonds and other securities it buys. The Fed does not pay with paper money. Instead, the Fed pays the seller's bank using newly created electronic funds, and the bank adds those funds to the seller's account. The seller can spend the funds or can simply leave them in the bank. If the funds stay in the bank, then the bank can increase its lending, purchase more assets, or build up the reserves it holds on deposit at the Fed. More broadly, the Fed's securities purchases increase the total amount of reserves that the banking system keeps at the Fed. Whether the Fed's purchases lead to an increase in the amount of money circulating in the economy depends on what banks do with the new reserves and on what sellers do with the funds they receive. As it happens, the money supply has not grown unusually rapidly since the Fed began its first round of asset purchases. If anything the money supply has been growing more slowly than normal.

Any student of money and banking recognizes the sophistry in saying that "the Fed does not pay with paper money." If the video viewers are the simpletons that Meyer presumes, he could have explained that the Fed purchases bonds in much the same manner as you or I purchase items using our debit cards. No paper money is involved; the ownership of a deposit (call it a demand deposit, checkbook deposit, or debit-card deposit) is transferred electronically. The difference is that while you and I transfer existing deposits, the Fed has created new deposits (i.e., "newly created electronic funds").

These deposits can be converted to cash at any time. There is nothing to prevent Meyer's bond sellers from using an ATM like anyone else. The electronically created deposits are turned into Federal Reserve notes; ipso facto the Fed has paid with paper money.

Suppose, as Meyer suggests, that the bond sellers do not spend their new deposits: "If the funds stay in the bank then the bank can increase its lending, purchase more assets, or build up the reserves it holds on deposit at the Fed." Only in the latter instance does money creation stop, and the expansion of money is then limited to the purchases from the original bond sellers. The increase in excess reserves largely matches the balloon in total reserves, suggesting that this has been the case. However, if the banks make additional loans (i.e., purchase additional assets), then new demand deposits are created. While the ratio may be disputed, some of these new deposits will be exchanged for paper money. Whether the Fed creates the new deposits or the banks create the new deposits, there will be some conversion into paper money.

More broadly, the Fed's securities purchases increase the total amount of reserves that the banking system keeps at the Fed. Whether the Fed's purchases lead to an increase of the amount of money circulating in the economy depends on what banks do with the new reserves and on what sellers do with the funds they receive.

While proponents of Keynesian economics might view this parsing as nitpicking, the raison d'être of the video is to dispel the frequent charge that the Fed is "running the printing presses" and courting the attendant danger of price inflation.

Meyer recognizes this, saying that "If the Fed were to continue buying securities even as banks eventually expand their lending then the money supply could increase too rapidly and inflation could become too high; Fed policymakers are determined to avoid that outcome." While Meyer is equally concerned about deflation, the purchasing power of money (i.e., the price of money) takes a back seat to the price of credit in Keynesian prescriptions. This attitude is best reflected in the WGBH video "The Commanding Heights" when, reflecting upon Depression-era financing, John Kenneth Galbraith said, "you didn't worry about accumulating debt, or, more precisely, you worried about it, but did it anyway."

It is not the goal of this article to delve into the efficacy of Keynesian prescriptions. But mainstream economists fall silent when pressed on the Fed's ability to control of the price of credit (i.e., interest rates). When it comes to the supply of credit, the Fed is a small fish in a big pond. No one disagrees that the Fed can control the supply of US dollars. At the same time, all agree that there is no optimal quantity of money. As a medium of exchange, a small amount of high-priced money can do the same job as a large amount of low-priced money. Perhaps the best we can say is that the existence of "add a penny, take a penny" cups suggests that too much money has been created, while the chopping up of Spanish dollars into "pieces of eight" hints that too little money exists.

Pete Kerr is retired professor of economics at Southeast Missouri State University in Cape Girardeau. His work has appeared in various publications including the Journal of Economic Education, Applied Economic Letters, and the Southern Economic Journal. See his website.