A Democracy (and Republic) of Decrees 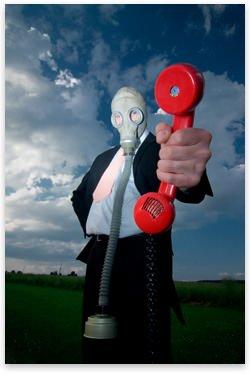 Sleep tight; a few weeks ago the federal government announced it was implementing a new cell-phone warning system — Personal Localized Alerting Network, deliberately and unimaginatively titled to reduce to the sophomoric acronym PLAN. PLAN will enable emergency bureaucrats, including the president himself, to hector the citizenry in the form of a text-message warning sent by FEMA to all cell phones in a particular locale.

The bureaucrats see it differently, of course. To quote Mr. W. Craig Fugate, head of the Federal Emergency Management Administration, from the New York Daily News, "Making sure that [people] get useful and life-saving information, quickly and easily, right on their mobile phones, will help more people get out of harm's way when a threat exists."

What harm and what threat? The question is rhetorical, though the increased cost to ensure you remain out of harm's way is very real. Starting next year, all cell phones will be required to incorporate a chip that receives "live-saving" histrionics. Why not? It is only your money.

And it is all their glory. Never one to forgo the opportunity to bathe in the glowing rays of the media spotlight, Senator Charles Schumer of New York, whose only discernible talent is an ability to get elected through fatuous demagoguery, took center stage again to display that talent. This time he is calling for a "no-ride list" for Amtrak trains after intelligence gleaned from Osama bin Laden's compound hinted at potential attacks on the nation's train system. To which those of us outside New York and Washington, DC, ask, what train system?

We have all met types like Messrs. Fugate and Schumer, nihilarians who have deluded themselves into believing they are altruistic world savers instead of the busybodies they really are, performing duties few demand, exacting extravagant wages no private employer would pay.

We can blame the golden calf of Western societies — democracy. Democracy permits the W. Craig Fugates, with their Orwellian titles and power of force, to lord their authority over the majority, because the majority — those who perform the anonymous labor of making the world a better place — are too busy to protest. Besides, new alerts, new intrusions, new irritants, and the expropriation of a few extra dollars per incident are only minor inconveniences in isolation.

Democracy and its conjoined twin, representative republicanism, imbue irritation and covetousness with legitimacy. The democratic process is a theater of the absurd and the tragic; for there isn't a fetish, a paranoia, an obsession, or a whim that can't be legislated. One need only to form a persuasive, vocal minority — and we can all do that when properly motivated — and then petition a malleable politician, whose livelihood depends on promoting the causes of all vocal, bribing minorities.

We wrongfully believe democracy engenders rule of law. It doesn't. Democracy invariably regresses to government driven by decrees, which differ from laws in that laws are consecrated by long usage. Laws are what people obey without stopping to think whether they have been legislated by government. Laws are part of a coherent, harmonious, and logical whole. A piece of legislation created ad hoc — and most are — is merely a decree.

"Because the decree is positioned as law, its very existence reduces respect for actual laws."

If democracies were subject to the law, the best citizens would reign and an aristocracy would blossom. But when laws are not supreme, demagogues flourish. The demagogues become king and are no longer under the control of the law. So they exercise monarchical sway, which grows into despotism, even if in niggardly degrees. Prohibition against phosphate detergents, forced buckling of seat belts, and purging of trans fats are all examples of despotism.

Decrees are driven by passion, as are democracies. Decrees and passions are unlimited and destabilizing. Any first-year economics student will understand. Diminishing marginal returns means the more units of something produced, the less value each unit holds. A marijuana dealer flouts the decree against marijuana sales. So what? It is just one of an expanding number of decrees. Because the decree is positioned as law, though, its very existence reduces respect for actual laws. Ethics become situational and fuzzy. If one is willing to flaunt a decree positioned as a law, is it a stretch to flaunt a true law?

A democracy of decrees, being capricious, infantilizes society; time preferences rise and time horizons shorten. Voters instinctively lean toward whichever politician offers to satisfy the most pressing perceived need, regardless of long-term consequences. Voting is a contest based on short-term rewards rather than long-term vision. Voters, generally ignorant of what Frédéric Bastiat called "that which is not seen," vote to entrench all ancien régimes. Imagination is limited to all that is familiar, thus discouraging experimentation.

Without an understanding of economics, it is nearly impossible to take note of the unseen — the fruits of the capital investment that never occurred. This is the reason poverty is so intractable in large swaths of the world. Capital accumulation and capital investment is what separates the United States from Sierra Leone. Capital is a by-product of long-term thinking and planning. Both are dependent on stable, predictable laws.

To be sure, the United States continues to prosper, but that prosperity is attenuated — in ways seen and unseen — by the infantilization that democracy promotes. The government official is a consumer, not a capital owner. The government official, unaccustomed to the discipline of the free market, doesn't earn his income through the production and subsequent sale of goods and services to the voluntary market. Rather, he is permitted to engage in, and live off, what in private dealings is considered theft.

Democratic government elevates decrees above the law by referring all things to the popular assembly; and decrees expand ad infinitum because the people have all things in their hands, and the government holds in its hands the votes of the people, whom government is too ready to serve.