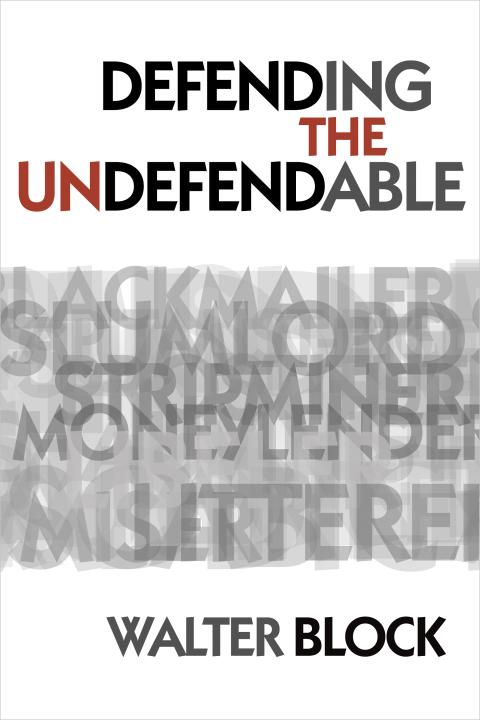 Professor Block's book is in a new edition from the Mises Institute, completely reset and beautifully laid out in an edition worthy of its contents.

It is among the most famous of the great defenses of victimless crimes and controversial economic practices, from profiteering and gouging to bribery and blackmail. However, beneath the surface, this book is also an outstanding work of microeconomic theory that explains the workings of economic forces in everyday events and affairs.

Defending the Undefendable performs the service of highlighting, the fullest and starkest terms, the essential nature of the productive services performed by all people in the free market. By taking the most extreme examples and showing how the Smithian principles work even in these cases, the book does far more to demonstrate the workability and morality of the free market than a dozen sober tomes on more respectable industries and activities. By testing and proving the extreme cases, he all the more illustrates and vindicates the theory.

Looking through Defending the Undefendable made me feel that I was once more exposed to the shock therapy by which, more than fifty years ago, the late Ludwig von Mises converted me to a consistent free market position. … Some may find it too strong a medicine, but it will still do them good even if they hate it. A real understanding of economics demands that one disabuses oneself of many dear prejudices and illusions. Popular fallacies in economics frequently express themselves in unfounded prejudices against other occupations, and showing the falsity of these stereotypes you are doing a real services, although you will not make yourself more popular with the majority.

"Looking through Defending the Undefendable made me feel that I was once more exposed to the shock therapy by which, more than 50 years ago, the late Ludwig von Mises converted me to a consistent free market position. Even now I am occasionally at first incredulous and feel that "this is going too far," but usually find in the end that Block is right. Some may find it too strong a medicine, but it wills till do them good even if they hate it. A real understanding of economics demands that one disabuses oneself of many dear prejudices and illusions. Popular fallacies in economics frequently express themselves in unfounded prejudices against other occupations, and in showing the falsity of these stereotypes Block is doing a real service, although he will not make himself more popular with the majority." —FA Hayek

"Judging from the outraged responses in many libertarian quarters, many of 'our people' are not ready for this exciting and shocking adventure. Since libertarians are, or are supposed to be on the forefront of thought, since their whole lives have been an intellectual adventure in many ways, the hostility becomes even more mysterious." —Murray N. Rothbard

"Many years ago Hazlitt's little masterpiece, Economics in One Lesson, demonstrated how, in order to measure the consequences of economic activities, one must look beyond their immediately obvious effects to thir secondary effects.  Here Professor Block sets out highly specific, and sometimes shocking examples of Hazlitt's thesis.  By concentrating on the positive economic contributions of extreme cases, he forces the reader's consideration and greater appreciation of these principles." —Robert D. Kephart

"It is a magnificent book, a trailblazer.  I would call it "Drano for Clogged Minds," except that Drano is neither amusing nor stimulating, and this book is both. I suggest buying two copies: one for yourself and one for the person you want most to catch up with you." —Roger Lea MacBride

"...More than almost any current book, DTU will wake the reader from his dogmatic slumbers.  It is eminently readable, challenging, and provocative." —John Hospers

"Startling and illuminating! Block's lucid defenses often convince: sometimes they lead us to sharpen our attack.  In either case, the reader cannot fail to be instructed and challenged by this mind-stretching, provocative, and occasionally infuriating book." —Robert Nozick

"What the critics have missed is that a book of libertarianism, not Objectivism, not Christianity, DTU used the most effective method for illustrating and teaching moral principles.  Shock your friends and educate them." —Don Ernsberger, S.I.L.

"This witty and wonderful book is a veritable manual of the 'joy of freedom.' If we were only half as interested in liberty as in lust, we would not have half the problems we have." —Dr. Thomas S. Szasz

"The most entertaining and one of the most instructive economics books I've ever read.  Block's unique style helps you see what's going on around you quickly and clearly.  The book is terrific.  Taking the most extreme examples possible and clarifying them will do more to bend the reader's economic thinking than a slow steady course in good economics." —Harry Browne

"We can congratulate Dr. Block for some iconoclastic and courageous interpretations." —Albert Ellis (psychologist)

"After reading Block's book, we recognize the pimp as an honest broker and the uncorrupted cop as the Nuremberg defendant who always followed orders.  We are reminded that strip mining of coal allows miners to escape black-lung disease and cave-ins... Block gives the reader succinct yet penetrating criticisms of the Federal Reserve System, and the Keynesian paradox of savings.  His chapter on charity is the best modern defense of social Darwinism that I have ever read." —Williamson Evers

"It is a brilliant, relentlessly argued book, pushing the libertarian case to its extreme limits...take seriously Ayn Rand;s dictum that one should be willing to defend the least attractive instance of a principle, and has done precisely that." —Roy Childs (Editor: Libertarian Review)

"Shatters, one by one, each of our liberal stereotypes.  It's a pleasure to read and a treasure trove of ammunition for the defender of the free market." —Tom G. Palmer (The New Guard)

"toleration of unpopular religious and cultural groups has always been one of the chief tenets of classical liberalism...Block carries this libertarian principle to its logical and radical conclusion: toleration of all non-aggressive pursuits." —Lawrence White (Harvard Political Review)

"A remarkable book.  I found myself agreeing with Block for most of the time, and his argument is often ingenious.  Spend a pleasant evening reading aloud some of his chapters (they are really quite short)." —Henry Meulen (The Individualist)

"There can be no question of my writing a testimonial on behalf of this book." —Nathaniel Branden

"Defending the Undefendable-A doomed attempt, one would say.  Like thinking the unthinable, uttering the unutterable, or calculating the incalculable.  As the philosopher remarked, wherefor one cannot speak, thereabout one had better keep quiet. This assemblage of defences cannot (can it?) be facetious since it is ushered in by the author's pious reference to a 'passion for justice'... Rather non persuasive are the cases made out for the Dishonest Cop, the Speculator in food, the Non-Contributor to Charity, the Stripminer, the Drug Pusher, the Denier of Academic Freedom, and the Person who yells 'fire' in a crowded theatre.  A passion for justice ought to inspire one to greater efforts." —D.J. Enright (London Times Literary Supplement)

"...A positive menace to the libertarian movement.  His smart-alecky, sensationalist style, the silly and false social and psychological assumptions he uses to back up some otherwise (mostly) valid political and economic points, the frivolous and insensitive attitudes he displays toward serious human problems all serve to confuse and distract from the valid points.  Most people will be difficult to convince on rational political grounds without obscuring the issue with other half-baked, offensive, and unnecessary arguments.  The book will be offensive to people not just because his general attitude will be interpreted as callous, asinine, and an affront to human dignity.  It will surely reinforce the worst stereotypes people have about capitalists." —Sharon Presley (Laissez Faire Books)

"...The wrong book at the wrong time... An absolutely mad way of introducing someone to libertarianism... I am convinced that it is probably a short run strategic disaster. One needs not only a steel will based on solid libertarian premises to accept Professor Block's message, but one needs a cast iron stomach as well. Those whom he defends are often, if not usually, the dregs of society: we could even say the very scum of the earth." —Walter Grinder (Libertarian Review)

"DTU is a work of unrealized potential. The editing is sloppy. And the quality of the writing varies from chapter to chapter. Many good arguments, and indeed the book itself, founder over a simple misconception: Block is misusing the word hero... He is not consistently attentive to detail, nor is he very ambitious in enriching his rich thesis with examples and anecdotes.  If he had attended better to the art of writing and spared us the silly insistence of making all of society's rogues into heroes, then his very important thesis might well have become a very important book." —Jamaes D. Davidson (Libertarian Review)

"Not only does he defend prostitutes, pimps, counterfeiters, ticket scalpers, slumlords, blackmailers, libelors, stripminers, letterers, and scabs (among others), he actually has the temerity to call them heroes!  Block even has the gall to challenge the most enduring shibboleth of higher education, academic freedom." —Dan C. Heldman (Universitas)

"The polarization of opinions on Block's book should not be surprising.  It is reflection of the book's schizophrenic nature—a bizarre combination of both excellent and horrible elements.  Apparently the endorsers chose to consider only the Dr. Jeckyll side of DTU and either ignored or failed to take seriously Mr. Hyde." —Sharon Presley (Reason)

"Political and economic defense of the voluntary activities of society's 'scapegoats' — pimps, slumlords, moneylenders, etc.  Done in a sensationalistic style, much of the reasoning is questionable and unnecessarily offensive. Not a good introduction to libertarianism." —Laissez Faire Books Catalogue

"Block defends some of the silliest ideas in support of an essentially good cause... He raises some stimulating issues, even if in an intellectually inadequate fashion... A foolish consistency may be the 'hobgoblin of little minds,' as Emerson said, but serious inconsistency (as in this book) is the downfall of many theories about morality and law." —Tibor Machan (World Research Ink)

Who's right? Make up your own mind!