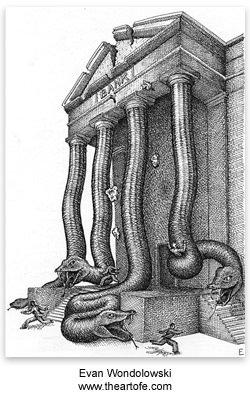 It's widely acknowledged that hundreds if not thousands of banks are on the ropes and just waiting for regulators to wrap them in yellow tape some Friday evening. However, fewer than forty US banks have been seized this year. The Federal Deposit Insurance Corporation (FDIC) list of problem banks grew to 305 in the first quarter, the highest number since 1994, but of course the names of those banks are not released so that depositors can be forewarned.

The assets of those troubled banks total $220 billion, while the FDIC's deposit-insurance fund has fallen to $13 billion. Not to fear: the Treasury Department tripled the FDIC's line of credit to $100 billion in preparation for more losses. So, including the line of credit from taxpayers, the FDIC has just over two cents of reserves to cover each dollar it is insuring.

Sure, the FDIC is not yet staffed up to close down the sick banks as fast as they would like to, but how do these banks remain liquid enough to keep operating? After all, savvy customers surely must study bank balance sheets and income statements to know where to safely place their funds. Doesn't the average bank depositor know the loan portfolio concentrations and past-due loan balances of their friendly neighborhood bank, only placing their funds in the safest of banks, leaving the worst banks to quickly run out of money and fail? Perhaps the most naive believe that.

Bernard Condon's "The Reverse Bank Run" article on Forbes.com explains that with increased FDIC deposit-insurance limits in place (up to $250,000 for interest-bearing deposit accounts),

Americans seeking high yields on their money are causing deposits at struggling banks to mount in seeming lockstep with their troubles. The result is that banks that should fail are sticking around longer, making the cleanup when they do more costly.

There is no incentive for bank depositors to go to the trouble of determining a bank's soundness if the government is going to guarantee deposits. Not to mention that most folks aren't equipped for the job anyway. On the other hand, if a legitimate banking system were in place, it would be based upon honoring property rights. Customers making a deposit in a bank expect the bank to guard, protect, and return their money — at a moment's notice in the case of demand deposits. After all, that person has not traded a present good for a future good. The depositors believe the bank is warehousing the money for them and that it is available to them at any time. This deposit is not a loan — there is no fixed term, which would be required in the case of a loan — and availability hasn't transferred.

However, we don't have legitimate deposit banking but a fractionalized banking system that combines deposit banking with loan banking. Those that sympathize with fractionalized banking will contend that time certificate of deposit accounts are in essence loans from depositors, entitling the bankers to use the funds at their discretion for the term of the CD — just as long as the banker has the money ready when the CD matures. But if the money is lent secured by illiquid assets such as real estate, the banker is clearly not counting on those loans to satisfy expiring CDs and must count on attracting new CD money to pay off the old.

"There is no incentive for bank depositors to go to the trouble of determining a bank's soundness if the government is going to guarantee deposits."

Bankers, pressured to earn returns for shareholders and protected from bank runs by FDIC insurance, have over time lent not only more of their deposits but advanced the money for riskier projects. James Grant in a recent Grant's Interest Rate Observer reminisced about National City Bank, which back in 1954 had only lent out 41 percent of its deposits, with less than one percent of the portfolio being real-estate loans.

By the end of last year, the total loan-to-deposit ratio for all US banks and thrifts was 87 percent, and 60 percent of all loans were classified as real-estate secured.

Instead of guarding the safety of deposits, banks embezzle the deposits and lend them out. The recently failed Silverton Bank in Atlanta lent its deposits on construction projects that turned out to be duds. Yet, as the bank was spiraling toward failure, its brokered deposits, described by Forbes's Condon as "money pooled from rich folks then shopped around for higher rates," quadrupled.

The Forbes article cites three banks whose brokered deposits doubled or tripled in the months leading up to their seizure by banking authorities. Problem banks desperately need deposits to stay afloat and thus they pay the highest rates, "and many people apparently either don't know about the [bank's] troubles or, more likely, don't care," Condon writes, because the FDIC has committed to covering deposits within its insurance limits.

RBC Capital's Gerald Cassidy, who is predicting that there will be over 1,000 bank failures, half-jokingly says that he scans Bankrate.com to identify the highest rate payers to determine which banks will fail next, according to Condon.

High on this list is Chicago-based Corus Bankshares, which is paying a half a percentage point higher for deposits than its competitors. During the boom, Corus was an aggressive high-rise-condo-construction lender and reportedly nearly half its loan portfolio is now nonperforming.

As Koning explained, the FHL Banks raise money by issuing bonds at low rates because "investors assume the FHLBank debt has a federal government guaranty," as was the case with Fannie Mae and Freddie Mac. This cheap money is then lent to the banks, providing banks and thrifts "with a steady and hassle-free flow of credit at subsidized rates."

So while an aggressive FHLB helped fuel the real-estate boom, Koning puts his finger on another factor that's making current bank failures costly to the FDIC fund: when FHL Banks make loans to banks, they take a lien on many of the banks' loans. Thus, when a bank fails, the FHLB will take possession of those loans that collateralized their advance, making them unavailable to the FDIC to sell in order to make depositors whole when it liquidates a failed bank. "This makes it more likely that, in the case of multiple bank failures, FDIC will not get a large enough slice of the pie to pay off insured depositors," Koning explains.

It is no wonder that the losses from recently failed banks equal a third of seized assets, which Condon points out is double the level from the 1990s banking crises. These losses lead Bud Conrad with Casey Research to the conclusion that the FDIC is in trouble. And that the deposit insurer and bank regulator will be bailed out with hundreds of billions in new funding from the taxpayer or the central bank. "Another bale of straw on the camel's back," Conrad writes, "and another reason to be concerned about holding paper dollars for the long term."

To keep today's zombie banks alive, massive amounts of government intervention have been required. In last fall's panic, the Fed wheeled out the Money Market Investor Funding Facility and the Asset-Backed Commercial Paper Money Market Mutual Fund Liquidity Facility. It raised the ceiling on insured deposits from $100,000 to $250,000; guaranteed new debt issuance of banks, thrifts, and holding companies, providing full insurance for any and all noninterest bearing deposits; and the Treasury issued a blanket guarantee of money-market fund liabilities. Ultimately the government took equity stakes in a number of larger banks.

Jesus Huerta de Soto explains in his book Money, Bank Credit, and Economic Cycles that, ultimately, fractional reserves cannot survive economically on their own and must be supported by government force in the form of a central bank that institutes the regulations and supplies the liquidity necessary at all times to prevent the entire apparatus from collapsing.

Although ostensibly it is dodgy real-estate loans that are bringing the banks down, it is really the fraudulent nature of the fractionalized banking system, described by Murray Rothbard in The Mystery of Banking as "the pernicious and inflationary domination of the state," that is the real culprit.

When loans without the backing of real savings "foster the foolish investment of resources and give rise to unwisely invested business assets which are either worthless or of limited value and therefore incapable of balancing the corresponding deposit accounts on bank balance sheets," Huerta de Soto writes, bank insolvencies tend to occur. Bank regulators accuse failing banks of operating in an "unsafe and unsound" manner. But what is "unsafe and unsound" is fractionalized banking, the lending out of embezzled deposits with the state's permission.