Daniel Bernoulli and the Founding of Mathematical Economics 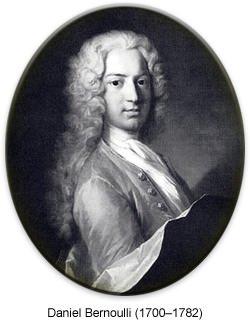 We should not leave the Tableau without mentioning a French-Swiss contemporary of Cantillon who prefigured the Tableau in one and only one sense: he can be said to be the founder, in the broadest sense, of mathematical economics. As such, his work contained some of the typical flaws and fallacies of that method.

Daniel Bernoulli (1700–82) was born into a family of distinguished mathematicians. His uncle, Jacques Bernoulli (1654–1705), was the first to discover the theory of probability (in his Latin work, Ars conjectandi, 1713) and his father Jean (1667–1748) was one of the early developers of the calculus, a method that had been discovered in the late 17th century. In 1738, Daniel, trying to solve a problem in probability theory and the theory of gambling by use of the calculus, stumbled on the concept of the law of diminishing marginal utility of money. Bernoulli's essay was published in Latin as an article in a scholarly volume.1

Bernoulli was presumably not familiar with the arrival at a similar law, albeit in nonmathematical form, by the Spanish Salamancan scholastics Tomás de Mercado and Francisco Garcia nearly two centuries earlier. Certainly he displayed no familiarity whatever with their monetary theories or with any other aspect of economics, for that matter. And being a mathematician, he got even his own particular point wrong, introducing the form of the law of diminishing marginal utility that would return to plague economic thought in future centuries. For the use of mathematics necessarily leads the economist to distort reality by making the theory convenient for mathematical symbolism and manipulation. Mathematics takes over, and the reality of human action loses out.

One fundamental flaw of Bernoulli's formulation was to put his symbolism into a ratio, or fractional form. If one insists on putting the concept of diminishing marginal utility of money for each individual into symbolic form, one could say that if a man's wealth, or total monetary assets, at any time is x, and utility or satisfaction is designated as u, and if Δ is the universal symbol for change, that

But even this relatively innocuous formulation would be incorrect, for utility is not a thing, it is not a measurable entity, it cannot be divided, and therefore it is illegitimate to put it in ratio form, as the numerator in a nonexistent fraction. Utility is neither a measurable entity, nor, even if it were, could it be commensurate with the money unit involved in the denominator.

Suppose that we ignore this fundamental flaw and accept the ratio as a kind of poetic version of the true law. But this is only the beginning of his problem. For then Bernoulli (and mathematical economists from then on) proceeded to multiply mathematical convenience illicitly, by transforming his symbols into the new calculus form. For if these increases of income or utility are reduced to being infinitesimal, one can use both the symbolism and the powerful manipulations of the differential calculus. Infinitely small increases are the first derivatives of the amount at any given point, and the Δs above can become the first derivatives, d. And then, the discrete jumps of human action can become the magically transformed smooth arcs and curves of the familiar geometric portrayals of modern economic theory.

But Bernoulli did not stop there. Fallacious assumption and method are piled upon each other like Pelion on Ossa. The next step toward a dramatic, seemingly precise conclusion is that every man's marginal utility not only diminishes as his wealth increases, but diminishes in fixed inverse proportion to his wealth. So that, if b is a constant and utility is y instead of u (presumably for convenience in putting utility on the y-axis and wealth on the x-axis), then

What evidence does Bernoulli have for this preposterous assumption, for his assertion that an increase in utility will be "inversely proportionate to the quantity of goods already possessed"? None whatever, for this allegedly precise scientist has only pure assertion to offer.2 There is no reason, in fact, to assume any such constant proportionality. No such evidence can ever be found, because the entire concept of constant proportion in a nonexistent entity is absurd and meaningless. Utility is a subjective evaluation, a ranking by the individual, and there is no measurement, no extension, and therefore no way for it to be proportional to itself.

After coming up with this egregious fallacy, Bernoulli topped it by blithely assuming that every individual's marginal utility of money moves in the very same constant proportion, b. Modern economists are familiar with the difficulty, nay the impossibility, of measuring utilities between persons. But they do not give sufficient weight to this impossibility. Since utility is subjective to each individual, it cannot be measured or even compared across persons. But more than that; "utility" is not a thing or an entity; it is simply the name for a subjective evaluation in the mind of each individual. Therefore it cannot be measured even within the mind of each individual, much less calculated or measured from one person to another. Even each individual person can only compare values or utilities ordinally; the idea of his "measuring" them is absurd and meaningless.

From this multi-illegitimate theory, Bernoulli concluded fallaciously that "there is no doubt that a gain of one thousand ducats is more significant to a pauper than to a rich man though both gain the same amount." It depends, of course, on the values and subjective utilities of the particular rich man or pauper, and that dependence can never be measured or even compared by anyone, whether by outside observers or by either of the two people involved.3

Bernoulli's dubious contribution won its way into mathematics, having been adopted by the great early-19th-century French probability theorist Pierre Simon, Marquis de Laplace (1749–1827), in his renowned Théorie analytique des probabilités (1812). But it was fortunately completely ignored in economic thought4 until it was dredged up by Jevons and the mathematically inclined wing of the late-19th-century marginal-utility theorists.