Crony Capitalism and the Transcontinental Railroads 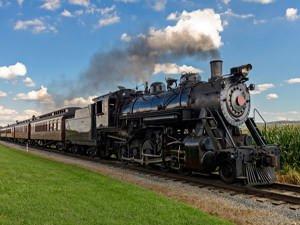 When Barack Obama used the transcontinental railroads as an example of the wonderful things that can be accomplished with grandiose government programs, he was attacked for mistakenly referring to the railroads as “inter continental.” Notably, he was attacked by approximately no one for talking up a government program that in reality should be best remembered as a pioneering feat in government corruption, corporate welfare, and immense waste.

Although not related in quite the heroic terms it once was, the trans­continental railroads retain their place as one of the great alleged suc­cess stories of nineteenth-century America. According to the popular myths, the same myths now exploited by the president, and challenged by no one, the railroads, these supposedly great monuments to the ingenuity of American industrialists, united East and West by bringing together the economies of the West coast and the East coast. This government program then set the stage for the massive economic growth and national greatness that would occur in the United States during the early twentieth century.

As creatures of government and of taxpayer-funded schemes to subsidize the railroads and their wealthy owners through cheap loans and outright subsidies, the railroads quickly became scandal-ridden, wasteful, and contemptuous of the public they were supposed to serve.

This tale is told in grim detail in historian Richard White’s 2011 tome on the transcontinental railroads, Railroaded: The Transcontinentals and the Making of Modern America, which exposes the near-utter disconnect between the railroads and the true geography of the markets in the mid-nineteenth century.

While it has been long-assumed that the West coast benefited immensely from the transcontinentals that connected the West coast to eastern markets, in fact the overland railroads made little difference. The West coast already had its own economy founded on exports to Europe and Asia, and Californians and Oregonians obtained all the goods they needed by sea. Indeed, for years after their completion, the railroads of the West coast were unable to effectively compete with the steamship operators (many of them also subsidized by Congress) that provided cheaper transportation of goods. Naturally then, this situation degenerated into a political competition between railroads and steamship companies seeking more favorable treatment from the federal government.

In general, however, the economy of the West coast turned to the more efficient and more competitive sea carriers. By the 1860s, the sea carriers were already taking advantage of well-developed trade with the Panama Railroad across Central America, completed in 1855, that was providing true transcontinental shipping at a much lower price over a much shorter overland route.

In spite of massive subsidies and free lands equal in size to New England, the lack of overland trade made it difficult for the railroads to turn a profit, and after a series of bankruptcies, bailouts, and other schemes, railroad owners like Leland Stanford, Thomas Durant, and Jay Gould managed to make a lot of money manipulating federal largesse, but many others, including families and ranchers who followed the flood of money and capital west during the boom, but who found themselves as paupers on the western plains after the bust, were ruined by the railroad’s bubble economy.

With the signing of the first bill to create the transcontinentals in 1862, it was already known that there was no economic justification for the railroads, which is why they were, according to White, “justified on the grounds of military necessity.” Lacking any privately funded-entrepreneurs willing to build a road through more than a thousand miles of territory uninhabited by whites, the 1862 Railroad Act created the Union Pacific, making it the first federally-created corporation since the Bank of the United States. Legal and economic shenanigans ensued, and it would not be until the 1890s that anyone built a privately-funded railroad, the Great Northern Railway.

Indeed, by the 1890s, global progress in technology and technique had greatly reduced the cost of constructing railroads. The benefits of waiting for the private sector to construct railroads when costs and consumer demand made them feasible could have been enormous. The costs of not waiting were indeed huge. The transcontinentals set the stage for the corruption and corporate capitalism that now defines the Gilded Age in the minds of many. While much of the American economy of that era was characterized by very free markets, the railroad markets west of Missouri were anything but. In the end, the railroads constituted a huge transfer of wealth from taxpayers, Indians, Mexicans, and more efficient enterprises who found themselves competing with these subsidized behemoths.

It was the same old story of using the state to socialize costs while privatizing profits. As one opposition Congressman declared in response to the Railroad Bill, the enterprise was “substantially a proposition to build this road ... on Government credit without making [the railroads] the property of the Government when built. If there be profit, the corporations may take it; if there be loss, the Government must bear it.”

Even if presented with this information today, many Americans, both left and right, are likely to just shrug and make the consequentialist argument that the railroads were “worth it” because without them, “America” (whatever that means to the one making the argument) wouldn’t be as “great” (another perfectly malleable term) without the transcontinentals being built by the U.S. government. This enormously presumptuous statement, however, completely ignores the opportunity cost of constructing and financing the railroads in that fashion. What else could have been funded with the resources that went to the railroads during the decades following the American Civil War? We’ll never know.

Yet even during the 1870s and 80s, when it became apparent to many that the railroads were a gargantuan waste of money, and most of the railroad companies were in bankruptcy, the railroad’s supporters claimed that it had all been a great idea because, although the railroads were bankrupt, the railroads themselves were still there, and were now presumed to be an immutable part of the landscape forever available for future Americans. Even that argument held no water, of course, because it turns out that railroads require an enormous amount of upkeep and maintenance. This was especially true of the first transcontinentals which were poorly and cheaply constructed, and which required rebuilding in many places. The railroads were in fact huge white elephants that in many cases could only be maintained with cheap government financing and other forms of corporate welfare.

Interestingly, White, in his conclusions in Railroaded, appears somewhat dismayed at the chaos that reigned among the railroad companies and within the so-called markets that connected the railroads to the farmers, ranchers, and miners who used the railroads for shipping. Lacking the insights of the Austrian School, White fails to see the booms, busts, and waste of the transcontinentals as the natural outcome of a government-dominated market divorced from a functioning consumer market or price system. White’s understanding of economics remains mired in neo-classical assumptions using buzzwords like “competition” and “efficiency” as the most important aspects of markets. In this, White is very much like his nineteenth-century subjects who, we learn from White, were themselves stuck in non-Austrian economic thinking that so often concludes that when markets appear to be broken, they can be fixed by government-mandated competition and government-determined prices that are said to be more “efficient.” The central role of the consumer, so well understood by Austrians, was often ignored by even the most consistent free-marketeer of that time and place.

I’m forced to forgive White for his ignorance of economics, however, for he has done a great service in providing us with such detailed and unvarnished documentation of the crony capitalist world of the transcontinental railroads. Although he’s likely a complete stranger to the works of Bastiat, White concludes that the unseen cost of the transcontinentals is one of the great ignored realities of the railroads. Those who dogmatically defend the government’s transcontinentals, White asserts, need to “escape” thinking that assumes the “inevitability of the present.” Yes, it’s a fact that the government-financed railroads were built, and yes, it’s a fact that American standards of living increased greatly in the decades that followed. The assumed connection between those two events, however, is on far shakier ground, and the assumption that it was right to tax and defraud millions of American taxpayers to make the enormous boondoggle a reality, is on the shakiest ground of all.